Mirrorshades: the Cyberpunk Anthology, edited by Bruce Sterling and published just over twenty years ago, is an overview of the hottest young talent in SF in the mid-1980s. As far as introducing the reader to a bunch of authors, many of whom are writing buddies of Sterling himself, it does a fair job; while I wasn’t so enraptured by the stories that I’d want to keep the book and read them over and over again, they at least gave me some idea of which authors of the William Gibson-Bruce Sterling circle I’d want to explore further. On that basis, it’s a pretty good book. Mirrorshades is held up by cyberpunk fans as a definitive collection, in every sense of the word. The claim that the book defines the cyberpunk genre originates with Sterling himself, in his introduction. And if the definition was “cyberpunk is stuff that Bruce Sterling and his mates write”, I’d have no problem with it. 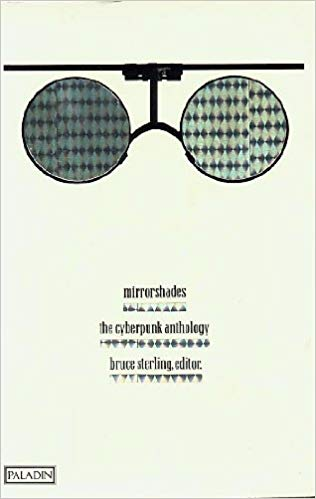 If only it stopped there.

Bruce Sterling insists on referring to cyberpunk as “the Movement” throughout his preface, as well as the little preamble he puts before each of the stories. He makes statements like “The term captures something crucial to the work of these writers, something crucial to the decade as a whole: a new kind of integration. The overlapping of worlds which were formerly separate: the realm of high tech, and the modern pop underground,” and a little later “Certain central themes spring up repeatedly in cyberpunk. The theme of body invasion: prosthetic limbs, implanted circuitry, cosmetic surgery, genetic alteration. The even more powerful theme of mind invasion: brain-computer interfaces, artificial intelligence, neurochemistry – techniques radically redefining the nature of humanity, the nature of self.” The idea of cyberpunk as a political subgenre of hard SF, devoted to making statements about the impact of high technology on the dregs of society, has a certain merit…

…except that it isn’t bourne through in three out of the 12 stories in the collection. William Gibson’s The Gernsback Continuum has almost no cyberpunk elements, with the possible exception of the idea of television as a means to readjust to consensus reality. Its main thrust is a condemnation of the outmoded aesthetics of 1930s science fiction, which – as Gibson points out – has “all the sinister fruitiness of a Hitler Youth movie”. Fair enough, but I raise my eyebrow at the idea that SF hadn’t moved on from the imagery of the 1930s pulps by 1980.

The inclusion of The Gernsback Continuum makes sense if the definition of cyberpunk is “Bruce Sterling and his mates”, and also just about makes sense if you are talking about a cyberpunk Movement: it’s important, if you’re trying to claim that you are spearheading a new literary movement, to distinguish yourself from that which has gone before, and I can see The Gernsback Continuum to be a statement about what the cyberpunks are rejecting. I can’t, for the life of me, understand what Tales of Houdini or Petra are doing in the book, though. Rudy Rucker’s Tales of Houdini is a story about Houdini conducting a series of ingenious escapes from life-threatening situations, ultimately escaping from ground zero of a nuclear test. Fair enough, but there’s no body invasion or mind invasion visible, nor is it a tale of high tech and low life; the only feature it shares with other cyberpunk works is a prose style reminiscent of J.G. Ballard and the more lucid bits of William Burroughs. Greg Bear’s Petra is a fantasy story about a gargoyle running around in a cathedral where all the statues have come to life. There is no question that Greg Bear needed his work promoted to a wider audience in the 1980s; Eon had come out the previous year and had been an absolute smash hit, and Bear had proven he could write passable cyberpunk in the form of Blood Music. The inclusion of Petra makes no sense if cyberpunk is a literary Movement with particular identifying features, and seems pointless from a “Bruce Sterling giving a shout-out to his mates” angle. The definition of cyberpunk is beginning to look like “stories which Bruce Sterling enjoys”.

Fortunately, Bruce himself doesn’t seem 100% committed to the vision of cyberpunk as a revolutionary Movement. (I apologise for the capitalisation, it’s Sterling’s, not mine). In his introduction to the book, Bruce waxes lyrical about the major debt the cyberpunks owe authors of the past, writers such as Philip K. Dick, Larry Niven, and so forth. Bruce wants the cyberpunks to be the heirs of a rich literary tradition, as well as a revolutionary Movement. His attempt to present cyberpunk as a coherent Movement may not pass the acid test, but surely the idea of cyberpunk as tradition has merit?

Possibly. Cybernetic implants go back a long way in SF, at least as far back Cordwainer Smith’s 1950 short story Scanners Live In Vain, in which astronauts must receive extensive cybernetic implants in order to successfully navigate ships between the stars (Smith’s Instrumentality of Mankind series presents a future history that bears an eerie similarity to the transhumanist fantasies of the more utopian postcyberpunks, coupled with a more cautious, humanistic sensibility). Computers and computing have been present for a long time, as have miscellaneous low-lifes just trying to make a living in a future not of their making (Philip K. Dick rarely wrote a novel where the protagonist wasn’t just some ordinary joe trying to make a buck). It’s even possible to identify novels which, for all intents and purposes, fit Sterling’s given definitions of cyberpunk perfectly – Niven and Pournelle’s Oath of Fealty, for example, or John Brunner’s Stand On Zanzibar.

However, by linking cyberpunk to these authors of the past, Sterling has made a dilemma for himself: if cyberpunk is a restatement of ideas previously expressed, cyberpunk is no longer special. We can see how cyberpunk popularised and proliferated the ideas of Dick, Brunner, and all the rest of the subgenre’s diverse ancestors, and we can see how cyberpunk has produced descendants such as the postcyberpunk work of Stephenson’s Snow Crash and MacLeod’s Star Fraction, as well as influencing traditional space opera – Peter Hamilton’s Night’s Dawn trilogy, M. John Harrison’s Light, and Westerfield’s The Risen Empire all contain a healthy dose of biotech, AIs and computer networks. But if cyberpunk is a new expression of something which has been present in science fiction for decades, and is still present today, why is cyberpunk itself particularly special? The definition of “cyberpunk” becomes “the name applied to a particular kind of hard SF in the 1980s”.

Cyberpunk as a Novel Mixture

There’s still one “out” for cyberpunk: the idea that it is a novel mixture of elements, that it’s the specific combination of different, previously-existing ideas that makes cyberpunk cyberpunk.

Close, but no cigar. As I mentioned earlier, Stand On Zanzibar and Oath of Fealty are as cyberpunk as they get. Pretty much the only new thing that the cyberpunks bring in is the use of 1980s pop music and fashion. And, irony of ironies, this means that the aesthetic of Mirrorshades has dated just as badly as that of the 1930s pulp nonsense Gibson rails against in The Gernsback Continuum. Let’s face it, science fiction authors shouldn’t try to predict the future of youth culture: at best, the results are laughably bad, at worst they betray a total disconnect with youth culture. Ladies: PVC skirt, boobs flopped out through your torn shirt, blue fluorescent glowing lines all over your skin, a nine-inch mohawk and electronic piercings sound like a good idea? I didn’t think so.

So, what are we left with? A distinct impression that Mirrorshades is a decidedly self-serving collection, an opportunity for Sterling to help out his struggling writer buddies, get chummy with more successful authors, and promote his idea of cyberpunk as Movement, while at the same time laying claim for him and his buddies being the legitimate successors of the New Wave of SF from the 1960s. In a way, Bruce Sterling is the Harlan Ellison of 1980s SF: just like Ellison, he’s known as much for the collection he edited as he is for his own fiction, and like Ellison he is prone to making grandiose statements that don’t bear much resemblance to reality.

Appendix: Where Are They Now?

Mirrorshades introduced us to 11 authors who, for better or worse, had been lumped in with the “Movement” by Bruce Sterling. I thought it would be interesting to see what they are up to now.

William Gibson continues to focus on computers and the internet with his books, and to his credit his books have become more nuanced and subdued as the Internet has become more developed. His most recent novel, Pattern Recognition, is set in the contemporary world, presumably because the Internet as it exists today is just as exciting and full of possibilities as the hypothetical networks he imagined in Neuromancer and sequels.

Tom Maddox, erstwhile writing buddy of William Gibson, hasn’t been especially prolific. He has a little over half a dozen short stories to his name, plus the novel Halo (not to be confused with the computer game). The high point of his visibility was probably the two X-Files episodes he wrote with Gibson. He’s put a bunch of his stories online, generously.

Pat Cadigan doesn’t like being pigeonholed into the cyberpunk movement, although her work does seem to sit nicely in it – 1998’s Tea From an Empty Cup, for example, is about a virtual reality museum which contains a replica of Japan as existed before being destroyed by a massive natural disaster. She also wrote the novelisation for Jason X, which considering that she won the Arthur C. Clarke Award twice is a goddamn tragedy.

Rudy Rucker has also remained squarely in the cyberpunk genre. Then again, he’s a computer scientist, so perhaps he’s trying to write about what he knows. He advocates a style called Transrealism, which is SF based on the author’s own experiences with a heap of fantastic experiences thrown in when you need to symbolise psychological growth.

Marc Laidlaw, conversely, wanders about all over the place with his fiction. The 37th Mandala, for instance, won the 1996 International Horror Guild Award for best novel. He works at Valve software these days, working on the Half-Life series of games.

Greg Bear‘s work sits squarely in the hard SF category. I think he was included in Mirrorshades because Sterling was impressed by Blood Music; however, Bear’s hard SF works like Eon are much more successful.

Lewis Shiner has moved on from cyberpunk to mainstream magical realism, often with a heavy injection of rock music.

John Shirley wrote the first draft of The Crow, and splits his time between cyberpunk and horror.

Paul di Filippo is awfully prolific these days, and writes in pretty much any genre with a “-punk” at the end of it.

Bruce Sterling is still a geek. He writes cyberpunk novels and cyberspace manifestos, he invented things like the Viridian Design Movement (because he likes Movements), and he’s written stories in his Shaper/Mechanist universe (the machines-vs-biotech conflict of which Peter Hamilton stole outright for his Night’s Dawn trilogy).

James Patrick Kelly is currently preparing Rewind: the New Cyberpunk Anthology. It will be interesting to see if it is as well-regarded as Mirrorshades, and if it is more coherent.

One thought on “Does Bruce Sterling Dream of a Cyberpunk Movement?”