There is no justification for placing the Underworld series in the horror genre, despite the abundance of vampires and werewolves, since none of the films ever really attempt to scare, spook, or instill a sense of dread in the viewer. As with the various World of Darkness roleplaying games that Underworld totally isn’t based on, it’s really best to regard the films as fun, gothy, mindless fantasy, with an appropriate emphasis on stylish violence and shapely female forms in unlikely costumes.

This being the case, it was probably inevitable that the series would end up ripping off Peter Jackson’s take on The Lord of the Rings. 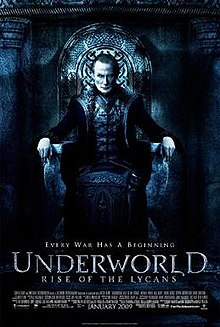 Underworld 3 (more properly Underworld: Rise of the Lycans) is set in the Dark Ages, a move certain to distance the series from the World of Darkness franchise. It covers the tragic romance between Lucian (Michael Sheen), the first Lycan (a werewolf able to transform between its human and wolf forms), and Sonja (Rhona Mitra), daughter of the vampire elder Viktor (Bill Nighy, chewing the scenery to pieces), and Lucian’s subsequent rebellion against Viktor and the liberation of the Lycans from vampire rule.

This scenario presents a serious problem for the filmmakers. I don’t refer to the common problem that prequels have (and which Rise of the Lycans suffers from), where the prequel is essentially restating a story we’ve already been told in the main series; Underworld has always made a virtue of predictability, offering a comfortingly familiar plot rather than anything you need to actually think about. No, the big problem with setting an Underworld film in the Dark Ages is that the film takes place before Kate Beckinsale’s character has been born, and before latex catsuits have been invented, and without her shiny plastic-clad tits and arse the franchise loses its main attractions.

The filmmakers clearly feel the lack of Kate, because they splice in a brief scene of her brooding in Underworld onto the end of Rise of the Lycans, and a brief snippet of dialogue from that film, for absolutely no good reason beyond saying to the audience “hey, remember these buttocks? This is the backstory that shaped them!” But they also make the decision to change the character of Sonja to make her, well, look a lot more like Kate Beckinsale’s character, replacing Jazmin Damak with Lara Croft model Rhona Mitra, and squeezing her into tight chainmail bodysuits and corsets that are vaguely reminiscent of Beckinsale’s catsuit-and-corset ensembles from the previous films. I went to see the film with a group including fellow Ferretbrainers Jen and Julian, and Jen pointed out that in Lucian’s flashbacks in the first Underworld film Sonja is clearly a lot blonder and more attractive than she was in Rise of the Lycans: clearly, Lucian’s memories are flattering to her. Personally, I find the hotness or otherwise of Rhona Mitra hard to assess; her proportions seem reasonable (although weirdly Rise of the Lycans seems much more reluctant to throw boobage at the audience to keep them happy), but I keep getting distracted by her freakish, collagen-wrecked, horrendously asymmetric lips. Ew.

Combined with the poor lighting and overuse of filters, Underworld: Rise of the Lycans more or less fails on the eye candy front if you’re interested in the female form. (For those of you who dig the dudes, I’m probably not the best person to assess this, but Michael Sheen has horrible greasy hair and a scraggly beard and looks like he stinks of piss in this, so unless you’re into the piss hobo look you’re probably not going to enjoy yourself either.) There’s a particularly ludicrous sex scene where Sonja and Lucian grind away in half a dozen positions in the catacombs beneath the vampire fortress, at the climax of which Sonja is straddling Lucian as he leans backwards over a cliff and waves his arms in the air in an “I’M FLYIIIIIIING” sort of pose, so that if she takes her weight off him he’ll fall backwards off the cliff to his death; that got plenty of laughs at the showing I went to. (Well, as many laughs as you can expect from a cinema which is four-fifths empty). The film makes up for its sex with the violence; because it’s pretending to be a horror film when it clearly isn’t, the sword fights are far bloodier than is typical for a fantasy film, with plenty of the red stuff splashing all over the place. The best fights are, invariably, the ones where the werewolves cut loose, but there are some vampire-on-vampire swordfights which hold up reasonably well if you are willing to forget the occasional Matrixism.

Unfortunately, good fights aren’t quite enough to hold together a limp and hole-ridden plot. The film opens twenty years into the struggle between vampire and werewolf; we are told that so far, the werewolves have all been demented savages, permanently stuck in their wolflike form and slaves to their bestial instincts. All this changes with the birth of Lucian, whose mother was being held captive by the master vampire Viktor; able to transform back and forth between his human and wolf form at will, Lucian is a more civilised breed of werewolf, and his potential is instantly recognised by Viktor.

Who then proceeds to utterly squander it.

Soon enough, Viktor is creating a new race of Lycans by allowing Lucian to infect Viktor’s human slaves, provided by the local nobility in payment for the protection of the vampires. This slave race of superpowered killing machines are only allowed to turn to their wolf form at certain times, and other times have to wear a nasty-looking collar with inward-pointing spikes (so if they transform while wearing the collar they’ll end up cutting their own throat). As far as I can tell, they are used mainly… as construction workers, doing a job that perfectly ordinary human beings could do just as well. There are also allusions to them having some sort of role in defending the fortress, but frankly they are never depicted repelling a werewolf attack even once; there’s a bit at the start where they are shown in wolf form lined up and chained to a wall, but this doesn’t seem to be an ideal arrangement for letting people defend your citadel. And for the rest of the film they are fairly consistently shown to be locked up during the daytime, which is when their help defending the castle would surely be needed the most. In short, Viktor has been collecting Lycans for no good reason and been giving them busy-work because he can’t think of anything better to do with them. (Sonja can think of a number of things to do with Lucian, of course, but this leads to sorrow and tragedy).

It’s no surprise that the Lycans eventually revolt, that Viktor is driven out of the fortress, that Sonja is tragically killed, and so on, because we’ve been told that all of this is going to happen before. The Underworld mythos is revealed fairly clearly and unambiguously over the course of the previous two films, and Rise of the Lycans doesn’t add anything to it except gaping plot holes. Why is Viktor breeding a slave race of palace guards that he never actually trusts to guard his palace? Why are all the Lycans forced to wear those collars except the enormous black guy – surely it’s not that the props department couldn’t make a collar large enough for him? How did that guy end up being a serf in central Europe anyway – were medieval peasant communities more cosmopolitan than I’ve been led to believe? Why is the moon always full in this place, night after night, week after week? Why are all the vampire soldiers wearing second-hand elf armour from The Lord of the Rings? How does Lucian manage to get the wild werewolves on side in that bit which was a lot like the Paths of the Dead sequence in The Return of the King? Where did the vampire princesses get all of those sparkly cocktail dresses and decidedly 21st Century haircuts? If you pay attention to the costuming, the time period the story is set in seems to lurch between the 10th and 18th Centuries, with the occasional jaunt to the modern day.

Actually, let me go off on a tangent here and talk about the vampire-elf thing. Aside from being dressed like the elven armies at Helm’s Deep in The Two Towers, for vampires the guys in Rise of the Lycans certainly behave a lot like elves – evil, tyrannical, perilous elves, but elves nonetheless. The fact that they are vampires is barely mentioned; over half the film passes before it even becomes slightly relevant. At this point, the scriptwriters suddenly wake up and remember they’re meant to be writing a story about vampires, so they have someone explode in sunlight and they have Bill Nighy drink some blood. By the way, did you know that Bill has a drinking problem? Specifically, he drinks like a messy child. There’s a bit where they show him sat on his throne drinking a probably anachronistic wine glass full of blood, but just having him sip at it clearly wasn’t dramatic enough for the director, so they have him glug it back and spill half of it down his chin, so he looks like he can’t handle simple motor functions.

The film’s many problems can be summed up by the final fight between Lucian and Viktor, wherein Lucian stabs Victor straight through the mouth and dumps him in a lake. Lucian does not bother to decapitate the guy or expose him to sunlight (the latter is especially unforgivable since there’s a big beam of sunlight right there), because Viktor needs to survive this to appear in the original films, but at the same time the fight concludes with an incredibly brutal act of violence (the aforementioned mouth-stabbing) because Lucian is the good guy and it needs to look like he’s won so that the film can have an upbeat ending where all the orcs werewolves cheer Lucian as the sun rises and the battle ends with a werewolf victory. Underworld: Rise of the Lycans constantly vacillates between tried-and-true Hollywood storytelling, which demands certain key elements (like a victorious ending for the werewolf protagonists), and a slavish retelling of the Underworld backstory, which demands that things go to shit, leading to an unsatisfying ending where the werewolves sort-of win and sort-of lose at the same time.

At the end of the day, this film seems like a massively pointless exercise, since it leaves the filmmakers back at square one: it retells Lucian’s part of the Underworld backstory, which has already been thoroughly explored in the previous movies, and it adds absolutely nothing new, meaning there’s no new material to base another sequel on. This means the filmmakers are in the position of either making yet another prequel, or just pushing the timeline forward by pulling something utterly random out of their collective arses. And they seem so in love with the mythos they have created I suspect they would be deeply reluctant to do that. Unless, of course, they’re a bunch of talentless hacks who are only in it for the money. This film is redeemed only by some cool action sequences and Bill Nighy, who chews the scenery with gusto. Beyond that, there’s no reason to watch this unless you’re very drunk and you can’t find either of the other Underworld films to rent.

5 thoughts on “The Vampires are Elves, the Werewolves are Orcs, the Audience’s Intelligence Is Insulted”