The vast majority of Warhammer and Warhammer 40,000 fiction published by the Black Library focuses on the human (or superhuman, in the case of the Space Marines) factions of the game. This is a deliberate policy of theirs, and it is a sensible one. Having taken care to establish exotic and alien backgrounds and psychologies for the various nonhuman creatures in the relevant settings, Games Workshop don’t want that undermined by stories which treat the groups in question as just human beings in funny costumes. They try their best to make sure that those few novels and short stories they do publish from a nonhuman perspective are written by authors who truly “get” the faction in question, and can write about them in a way which gets across the essential differences between them and humans and which is true to the atmosphere, philosophy, and general theme that the faction is based around. 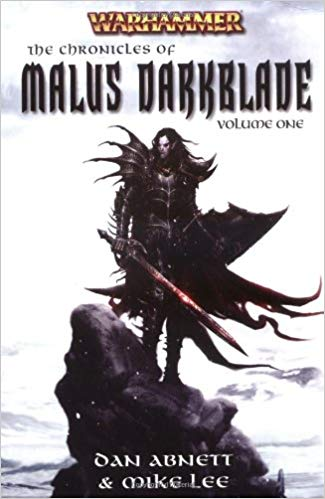 Unfortunately, accurately replicating the psychology of a particular faction doesn’t always lend itself to telling a rewarding and interesting story.

The Chronicles of Malus Darkblade is an odd project for the Black Library. For starters, it’s a collaboration between Dan Abnett and Mike Lee. What’s more, it’s an adaptation of a graphic novel – the original Darkblade series having appeared in episodic format in Warhammer Monthly, the Black Library’s now-defunct comic. Dan Abnett wrote the original series (which was illustrated by Kev Hopgood), which inspires a certain amount of suspicion in me with regards to the extent of his involvement in the novelisation; I can easily see the Black Library tasking Mike Lee with doing the donkey work in adapting Abnett’s original comic scripts to prose, with Abnett providing guidance and perhaps contributing some pieces here and there. Presto! Black Library get to put their star author’s name on more products, Mike Lee gets his name associated with Abnett’s, and Abnett gets to keep his Darkblade work in print.

That said, the idea of a prose adaptation of a comic seems odd to me. There’s no reason why, on an objective level, you couldn’t have just as many novelisations of comics as you get for movies – the transition from a visual medium to a verbal medium may well present many of the same challenges – but at the same time it doesn’t strike me as being quite the same on some level. Perhaps it’s the fact that comics are a print medium, and novels are a print medium, and so they seem somehow closer to one another than films and books; novelising a comic strikes me as exerting just as much effort as novelising a film in order to travel a shorter distance.

However, my problems with Malus Darkblade, as a book, have nothing to do with a subjective discomfort with the idea of adapting one print medium to another print medium, or baseless speculation about how much Dan Abnett really contributed after writing the script to the comic. The fact is that the end product, taken on its own, simply lacks merit.

The problem with Malus Darkblade is that the titular character, and the vast majority of the characters he interacts with, is a dark elf. The dark elves in Warhammer 40,000 are a debased lot, led by an immortal Witch-King who in a former life was a traitorous member of the high elf aristocracy, and who after being cast out of the high elf homeland have set about a long-term program of conquest, piracy, and pillage, with the occasional raid on the high elves out of sheer malice. Their ruling passion are spite and hatred, they are sadists without equal (and a decent proportion of them are masochists to boot), and they are inherently untrustworthy. It is heavily implied that they have been corrupted as a whole by the sinister machinations of Slaanesh, chaos god of unfiltered and unmoderated experience, which explains most of these oddities.

Psychologically speaking, that’s quite a package. And it’s a package which, in the portion of the first omnibus I read, Abnett and Lee have applied to all of the dark elf characters consistently. (To be fair, even a whiff of a dark elf bucking against the evil culture he or she was born into would raise spectres of R.A. Salvatore’s stories about Drizzt Do’Urden, a connection I suspect the Black Library were hoping to avoid.) And with all these nuances to express, and a strange urge to make sure that each one of these features is explicitly expressed at some point for each dark elf character, Abnett and Lee really don’t leave themselves much room to differentiate the dark elves from each other. And since Malus is a dark elf, and all of his allies, enemies, and just about everyone else he interacts with is a dark elf, this leads to a high degree of redundancy in the cast. Honestly, without having a look in the book, I can’t remember the name of a single character other than Malus himself.

I’m going to confess a little something here. I didn’t finish this omnibus. I got through the opening short story, The Blood Price, and read about half of the first book in the omnibus, The Daemon’s Curse, before quitting. The premise of the series is that Malus, who is all cool and edgy and broody and evil and has a surname that sounds like a product of a generic fantasy novel name generator, gets his hands on a sinister Chaos-spawned weapon, which of course leads to him being possessed by a demon, who demands that he gathers together five evil artefacts within a year, or forfeit his soul. In other words, it’s a five-volume fetch quest, with about one artefact per book. I did not, in fact, manage to read up to the point where Malus finds the demon weapon in the first place. (Though, to be fair, to spend half a book waffling before you introduce the premise of the series is a fairly dire sin in itself.)

I don’t like reviewing things I’ve not read/played/watched to completion. If I can’t find it it in me to give it that much of a chance, it’s often because it’s just that I have no sympathy at all with the story in question or what the author is trying to achieve. Either that, or I just find the material in question so dire that I have no desire to get to know it well enough to do a really in-depth of analysis of how much it sucks. I do make exceptions though, and this is one of them. You see, the thing is that I gave up on the story because for half a novel the only characters of any significance were dark elves. And the problem with the dark elves in this story is that they are pretty much all the same: scheming, sadistic, treacherous little gits with a knack for backstabbing each other perpetually. Whilst this is completely true to the way they are presented in the game, it’s also incredibly monotonous. Malus goes through a series of interactions with other dark elves, and you know that they are going to betray him and he them, and it’s often fairly obvious how that betrayal is going to unfold.

When double-crosses can be expected on a regular and consistent they cease to be interesting or exciting or surprising, which rather defeats the purpose of a dramatic double-cross in fiction. Glancing at synopses of the rest of the series, I note a consistently heavy focus on the machinations of dark elf society, which makes me supremely disinclined to give the thing another go. Part of the problem is that, although treachery is a repetitive and over-used motif in the plot, the story itself isn’t necessarily one that lends itself to this. Rather than a byzantine and cynical saga of dark elf politics, it’s an adventure story with a gloss of grim broody edginess thanks to the dark elf angle. Unfortunately, the adventures of Malus don’t quite come across as well as they could.

It’s not that the book is meritless. There’s some really nice imagery in there, which is doubtless a legacy of its origins in the comics. (I especially liked Malus’s foray under the waterlogged roots of an ancient, haunted willow tree.) Unfortunately, this vivid scenery is inhabited by drab and uninteresting characters dancing through a plot hampered by the predictability of the double-crosses. (Who’s betting that demon won’t really let Malus get away with his soul scot-free?) It is not helped by the fact that the prose, except for the occasional patch, isn’t up to Dan Abnett’s usual high standards of vividness and clarity, which goes back to my suspicions that Mike Lee actually wrote the majority of this.

But whoever wrote The Chronicles of Malus Darkblade, the fact remains that I just can’t get past the startlingly homogeneous cast. The “everyone is a treacherous bastard” thing works for the short story, which in itself is a perfectly fine little piece that gives a nice insight into why dark elf society is so horribly ineffectual and broken. But it just can’t sustain a novel.

One thought on “Never Turn Your Back On A Dark Elf”