Dan Abnett pays his bills with tie-in fiction; that’s what he’s built his career on. Writing for other people’s characters and settings both in prose and in comics is what he’s mainly known for, his most celebrated and high-profile material is his Warhammer 40,000 work, he seems fairly comfortable with all this. Even so, it’s nice to see Angry Robot books give him a chance to put out some all-original material, if only so Abnett can prove to readers that he isn’t reliant on other people’s setting premises. Along with the Elizabethan-punk Triumff: Her Majesty’s Hero, they’ve put out Abnett’s military SF novel Embedded, which Dan (our Dan, not Abnett) was nice enough to buy me as a present an embarrassingly long time ago. 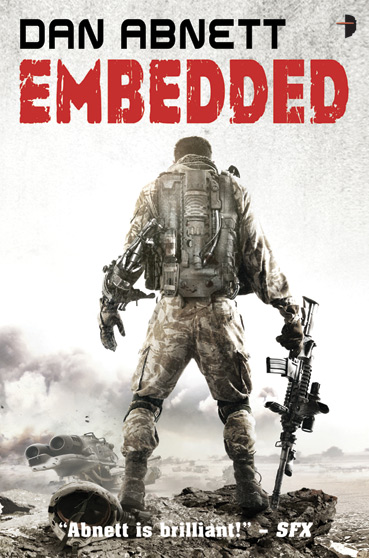 The protagonist of Embedded is Lex Falk, a highly experienced journalist who specialises in reporting on military action out in the Settlement, the off-world colonies established by human beings under the aegis of the Settlement Office. In the very mildly alternate history of the setting, the US, China, and the Central Bloc (think a sort of evolved version of the Soviet Bloc) are the main off-world powers, with the Settlement Office acting as a sort of UN in space: in principle, they’re all working together to colonise space, in practice the Settlement Office makes sure American troops go to provide security for colonies the Americans have dibs on and so on. Falk has come to the colony planet Eighty-Six, where rumour has it that military actions against “insurgents” are beginning to resemble a full-scale war; moreover, the US troops on the planet might not be fighting anti-Earth separatists or dealing with renegade corporate activity, but might in fact be in a shooting war with Central Bloc forces. Falk wants to find out if this is true – and, on top of that, to work out what prize could possibly be worth igniting an interstellar war over.

His problem is that the Settlement Office has become really very good at the whole media management issue, and any attempt to get the story through the usual channels is being carefully diverted away. On top of that, the usual unofficial ways and means of getting a story are turning up a blank, and there aren’t any reports leaking out from civilians inside the conflict zone either. Falk is at his wits’ end when he’s contacted by Cleesh, an old colleague of his, who has been able to arrange with sinister corporate intelligence operative Bari Apfel a unique opportunity to get the inside story. Apfel and his technicians have been able to secure the use of a Jung tank, the ultimate in telepresence technology which allows a person suspended within it to actually see through the eyes of another human being remotely, their consciousness remotely transmitted into the receiving subject’s mind to act as a sort of back-seat observer. As well as raising disturbing implications about the illusion of personal identity, the Jung tank does not function as intended – projected into the mind of Nestor Bloom, a squad leader on the front line of the fighting who for reasons of his own has volunteered to receive a mental passenger, Falk is not only unable to communicate with Bloom and has extremely limited communication with Cleesh and the others, but Falk’s emotions and reactions leak over into Bloom’s, throwing Bloom off his game.

When Bloom suffers a glancing shot to the head, the duo lose consciousness, and when wakefulness returns Falk finds that he’s stuck in control of Bloom’s body with only residual memories and instincts to show that Bloom was ever there. Eventually, he discovers that Bloom should by rights be dead – it’s only the presence of Falk keeping his medulla oblongata ticking over that stops his body shutting down altogether. Not only must Falk maintain his cover and quickly adapt to being Bloom for the purposes of the mission – by now hopelessly fucked up – whilst trying to uncover the answers he’s been chasing, but he also finds himself refusing to allow Cleesh to pull him out early until he can get Bloom to safety.

The obvious difficulty for Abnett writing any sort of military-focused standalone SF is trying to find a story he can tell which clearly isn’t a rehash of his Gaunt’s Ghosts material or his other Warhammer 40,000 work. In this respect Embedded is very successful: the most fantastic technology present (the Jung tank) has no real parallels in 40K, objective investigative journalism about major military conflicts would be ruthlessly suppressed by the Imperium, and in general Abnett’s setting has a very different tone from the perpetually turned up to eleven galaxy of the 41st Millennium. Falk’s world is one which combines futuristic but not unlikely updates of present-day internet technology (a lot of the characters use devices not dissimilar to Google Glasses) with a future of space exploration reminiscent of the Cold War.

This latter feature might lead some to accuse Abnett of leaning too heavily on the Cold War-era space SF of yesteryear, but I think he’s doing something a bit more clever here. Obviously, the whole “embedded journalism” angle brings to mind the Iraq War, but the way the novel depicts an alternative world in which the Cold War superpowers have headed off into space and to have the main conflict be between the US and Central Bloc results in a conflict which is almost entirely unlike that one. This suggests to me that Abnett wanted to consider the idea of embedded journalists independently of other issues surrounding the Iraq War; the point isn’t to recall a specific conflict in which embedded journalists were a feature, but instead to ruminate on how far the whole idea of embedded journalists can go before the line between journalist and soldier becomes hopelessly blurred.

In particular, Falk and Bloom’s situation is a curious inversion of the way embedded journalism usually works. Whereas the usual strategy behind embedded journalism is for journalists to join military expeditions on the military’s own terms, reporting what the military wants the outside world to hear and generally make the journalists reliant on what the military allows them to see and report, Falk’s infiltration of Bloom’s mind gives him access to military information which the brass wouldn’t have wanted him to see. On top of that, Bloom’s decision to collaborate with the implantation process makes him a kind of whistleblower. The contrast between what they are able to achieve through their conspiracy compared with what Falk is able to find out through the officially-sanctioned embedded journalism day trips is striking. Abnett’s position seems to be that insightful journalism requires either absolute independence, acting free of any official restriction, or journalists collaborating so closely with the subjects of their stories that they become part of the story themselves; trying for a middle path where you retain your journalistic identity whilst being dependent on an exterior authority for your information is hopeless.

Away from the more serious stuff the book plays with, Abnett also delivers fairly exciting action once the military side of the story steps into high gear and also gets a little playful at points. One of the things the Settlement Office has done on Eighty Six to make sure people send back the right message to Earth is offer soldiers and journalists a language patch to replace their brain’s usual dictionary of cuss words with a corporate-sponsored alternative, so whenever they want to say “fuck” or whatever they instead say “Freek®” – yes, they pronounce the “®”. This leads to exchanges where people who can actually say fuck deride people who have to say “Freek®” for being phony-sounding dorks. It’s a neat parody of the way a lot of science fiction – including properties like 2000 AD which Dan Abnett has written for – is willing to show all kinds of brutal violence but doesn’t want to have its characters use real world cuss words because that might make the stories in question mildly more difficult to market to a young audience.

So, you have some interesting themes and you have pulse-pounding military SF at Abnett’s usual level of competence – are there any downsides to the book? Well, it is kind of a dude book for dudes, and women have a curious tendency to get sidelined in it. There aren’t any women in evidence in front-line combat roles in the US military in this universe, making it already look a little dated, and Falk takes an irritating amount of satisfaction in being rude to or outsmarting women he encounters out of all proportion to the extent he butts heads with men he encounters. Admittedly, this might be down to Falk being kind of a sleazeball, but then again it’s Abnett that engineers these situations where Falk keeps being able to show up female characters, even though to be fair to him I didn’t get the impression Abnett 100% stands by the way Falk treats people.

On top of that, there’s a human trafficking angle to the story which, of course, involves Eastern European women being sold into the sex trade, and whilst Abnett at least offers a reasonably unglamourised and non-sensationalised take on the subject it’s a little depressing that the sole Central Bloc characters Falk/Bloom actually has a conversation with are women forced into prostitution. (There is one other Central Bloc woman in the story, but she’s a black ops type who exists to shoot Bloom in the head.) But this bit of murkiness aside, the book’s as competent a page-turner as any of Abnett’s Warhammer 40,000 novels and comparatively smart with it. Thumbs up to Dan Abnett for proving that he could make it on his own if he really wanted to and to our Dan for getting the book for me.