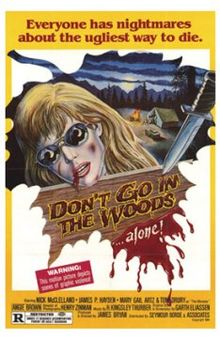 Intellectually speaking, I know for a fact that director James Bryan and his crew didn’t just grab a bunch of random props and kit, stroll off into a forest in the Rocky Mountains, and shoot Don’t Go In the Woods… Alone! on a completely improvised basis. But fuck me, does it do absolutely everything in its power to convince you that that’s exactly what they did. The plot, such as it is, goes like this: random people holidaying in the mountains get murdered by a killer (some sort of dishevelled wild man played by Tom Drury and credited only as “Maniac”) in little vignettes. Interspersed between these vignettes we get what would, in a conventional movie, be our main plots – a group of young hikers strolling around on a walking holiday, and the local sheriff (Ken Carter) and his deputy (David Barth) investigating the mayhem that’s kicking off out in them hills.

Eventually the hikers, the killer, and the lawmen cross paths and something resembling a plot unfolds itself for the viewers’ benefit, but goodness knows the process of getting there is awkward and haphazard. Whilst some filmmakers have been able to do great things with a $20,000 budget, a cast and crew with more enthusiasm than competence, the best you can say about this one is that it’s an absolutely fascinating disaster, with cheap gore effects and bad acting being the order of the day.

It’s the technical sloppiness of the movie which jump out at you at first. At points the editing work and cinematography is incredibly inept – in the second killing I think the quick cuts are meant to give us a brief flash of the killer’s weapon before the victim’s arm is severed, but they fuck it up the timing or the framing or the edit or something so it just looks like the victim’s arm spontaneously fell off. (I sort of wonder whether the tagline about “the ugliest way to die” refers to some of the cinematography here.) The soundtrack is going for this atmospheric, electronic John Carpenter sort of deal, but it ends up sounding more like musicmonger H. Kingsley Thurber spent a couple of hours fiddling with, stroking, and occasionally energetically humping a cheap synthesiser and then submitted whatever squawks and bleeps came out of that process.

The thing which stands out the most of all is the way that all the dialogue is badly dubbed. This is the sort of move you do when you can’t afford to use a proper microphone for your shoots so you just do without and then dub in the dialogue later on, and in principle it works fine – these are English-speaking actors delivering English dialogue dubbing over lines originally spoken in English by themselves, and yet you still end up with the sort of really awkward cadences and messed-up emphasis you see on the likes of, say, any of the various Japanese movies that got dubbed on the cheap by English distributors that Mystery Science Theater 3000 has featured over the years.

On top of that, I almost suspect that the actors were goofing about and doing the silliest dubbing job they could on purpose, because even the parts of the movie that we’re supposed to take seriously aren’t treated especially seriously. Most of the one-scene-and-done victims are utter cartoons, ridiculous over-wacky comic relief characters of the “dress like a huge dork and make weird facial expressions at all times” school. (There’s also a mean-spirited joke about a guy in a wheelchair getting into difficulty going up a hill and having speech issues, which disgustingly is the most sustained comic relief character, with several scenes featuring him interspersed through the end of the movie.)

However, all of the characters in the supposedly serious plotlines are also comic relief – the sheriff and deputy are total caricatures, and the hikers are amusingly unlikeable jerks to each other. For instance, two of the hikers get into a weird prank war with each other, and I think it’s meant to be all fun and flirtatious because for the most part they’re all giggly about it, but they go way too far – one of them gets a large fingerbone-crushing rock dropped on the other’s hand really hard, and then when making like she’s checking out the wound she whacks him hard on the knuckles, and then later on he ties her up in her sleeping bag and suspends her from a tree branch like a sack of potatoes and whacks her with a stick like it’s a pinata, a game which isn’t really too far off from one of the wild man’s killings.

Even late in the film, once the hikers run across the killer and they are making a token effort to act scared, it’s impossible to take things seriously because the movie just spent half an hour making damn sure we wouldn’t take these characters seriously. There’s a bit where one of the hikers ends up accidentally murdering a random hiker because he thought he was the wild man (for a supposedly remote bit of the Rocky Mountains, these woods are incredibly crowded with random passers-by), and far from coming across as a tragic accident it just feels like yet another joke – the same goes for when one of the hikers, having made it to the hospital in town to get the word to the authorities, randomly runs all the way back to the woods to go look for one of the buddies he left behind without anyone making any effort to intercept him – far from being a dramatic moment where this whiny loser shows some grit and becomes accepted by the audience as a hero as a consequence of that, it just looks like it’s a joke about how incompetent the authorities are when it comes to taking care of an injured and delirious man.

Amazingly, the movie was taken seriously enough by the British authorities during the 1980s video nasty scare that it actually got on the infamous Department of Public Prosecutions list – in fact, it was one of the 39 films on the list which stayed on there for the full span of the moral panic. One can only conclude that this was an arbitrary decision arrived at by someone who’d only read a summary of the film’s action; the current uncut release is classified as a 15 certificate, presumably because there’s none of the pointless sexual titillation that slasher movies of this era usually go for and the gore and violence is laughably unrealistic. Far from being morally corrupting, it’s hasn’t got the power to derive anything other than mocking laughter from all but the tenderest and most sheltered of audiences. For lovers of schadenfreude and bad movie nights only.