Has anyone noticed how it feels like novellas are making a bit of a comeback? Formerly the poor cousin of short stories – long enough to be awkward to anthologise, short enough to be uneconomical to publish by themselves – it seems like more and more these days I’m seeing books published to a much more modest length, the fetishism of brick-sized epics perhaps fading away.

Take, for instance, Ramsey Campbell’s bibliography; earlier on in his career, novella-length works tended to be comparatively rare, but more recently thanks to his close relationship with PS Publishing (who are quite fond of the novella format) he’s been putting out more from time to time. So, since it’s the season, let’s take a look at two novellas from very different ends of Campbell’s career. 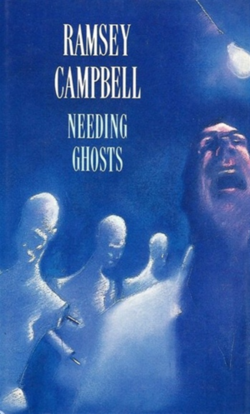 In this short piece written for Legend’s line of novellas in 1990, Campbell designs a particular vision of Hell crafted for writers. Simon Mottershead wakes up one gloomy morning with only the vaguest idea of who he is. Pottering about his empty house with its ominous empty bedrooms hinting at a family that he has lost somewhere, he sets off to hop on the ferry into town to get cracking on his retirement project – he’s out to tour the bibliophile’s haunts of his local area to try and accumulate enough stock to open his own second-hand bookshop.

Or was he going to visit the library and give a talk to a writer’s group, seeing how he’s the well-known author of the bestselling Cadenza? Is Cadenza a classic novel that’s made Mottershead a household name, or is it a forgotten and slightly sordid book that’s no longer to be found on the shelves of any self-respecting bookshop? Who’s that disreputable-looking vagrant that keeps hassling Mottershead as he goes about town? And when Mottershead starts for home, where should be be going – back to the empty family home that he’s converting to a bookshop, or to the rest home with its overbearing nurses and decaying residents, or to the family home where his wife and kids walk on eggshells around him?

Essentially a character study of a protagonist in the midst of some kind of crisis, Needing Ghosts is pretty clearly one of those “and it turns out that the main character is dead/insane/senile” stories – but it manages to add a new spin to the format by making that revelation a source of greater doubt rather than trite certainty. Realising that he may well either not be sane or not be alive at all, Mottershead also comes to the conclusion that in whatever state he is in, he is at the mercy of his own imagination. If he had been an unimaginative sort in his previous existence, it might not be so bad – a poor imagination would at least run out of ideas. But as a writer, Mottershead was full to the brim with stories, to the point where telling them became a compulsion rather than a profession – and his imagination was so powerful that it can devise new torments for him indefinitely.

Needing Ghosts is, let’s face it, a writer writing about being a writer. If you object to that sort of thing on principle then you may not enjoy it, but for my part I think that whilst that particular theme gets tired when Stephen King uses it, Campbell is able to bring something interesting to the mix. I particularly like the parts where Mottershead is addressing the writer’s group and confesses that he writes his stories because he can’t not – they demand to be written – and the suggestion that after his mental breakdown Mottershead spent his time strolling around babbling his stories to anyone who’d listen to them is a pretty powerful image. It speaks directly to my own fears of declining to the point where I can’t communicate effectively with people, so on that note Needing Ghosts is at least not completely solipsistic. And even if you don’t care about writing, it’s still a pretty freaky story, with Campbell’s skill at capturing the hostility of everyday life in full force. 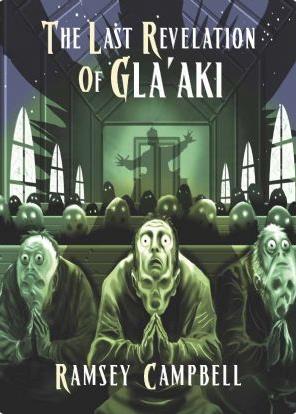 The Last Revelation of Gla’aki

Hailing to 2013, this is a novella-length sequel to one of Campbell’s first stories, The Inhabitant of the Lake. This was the title story of Campbell’s very first short story collection, produced under the mentorship of August Derleth, who to give him his due not only doesn’t seem to have minded that Campbell didn’t pay much attention to the Derlethian definition of the Mythos but also was excited enough about Campbell’s early promise to produce that collection, despite Campbell’s comparative inexperience and lack of a major reputation in the field.

The stories there are mostly Lovecraft pastiches of a sort which Campbell quickly grew beyond in later collections, and out of all of them The Inhabitant of the Lake itself is possibly the best; despite Campbell’s relative inexperience when he wrote it, there’s something haunting about the titular inhabitant, the Great Old One Glaaki, the rather odd sort of quasi-immortality that Glaaki bestows on its followers and the decrepit lakeside community that followed it.

The story not only introduced Glaaki himself but also introduced The Revelations of Glaaki, a multi-volume Mythos tome that soon took its place alongside texts like the Necronomicon or De Vermis Mysteriis through being referenced in stories by others. It’s that which provides the hook here: when Leonard Fairman, a librarian at Brichester University, writes an article about the book and how it is reputed to be entirely lost, he gets contacted by a reader who claims to have a copy. Fairman duly heads up to the faded seaside town of Gulshaw to collect it, only to discover that his contact only has a single volume to give him, and the name of the person who has the next volume.

This begins a long trail through the town, extending Fairman’s stay well beyond his intentions. As the local inhabitants are keen to point out to him, though, there’s “so much more to see” – and the more Fairman sees of the town, the more its strangeness becomes apparent. Despite thinking of himself as not being much for dreams, Fairman starts having his own dreams of Gla’aki, even as it becomes apparent that he along with the rest of the town is being reshaped by Gla’aki’s dreams…

Fairman’s journey, then, is an opportunity for Campbell to both riff on some of his own cosmic horror concepts (such as the linguistic angle in The Grin of the Dark) and revisit some of the toys of Lovecraftian pastiche he used to play with. The Revelations of Glaaki as presented here are not fully and completely written out – to do would be tedious and rob them of their mystery – but the snippets we do get in part present the underlying philosophy behind the tale and hints to the truths about what is going on, as well as gently teasing some of the less purist takes on the Mythos we’ve been subjected to over the years. There’s a reference, for instance, to Frank Belknap Long’s attempt to inject overt Christian symbolism into the Necronomicon, explaining the alleged effectiveness of the cross as being a side-effect of cultists’ Christian upbringing holding more sway over them than they would admit; likewise, the star-stones that Derleth and Lumley are so fond of using as protective talismans are described as merely being a diagram of an earlier phase of the universe that some of the more simple and brutish Mythos entities don’t like thinking about, so it might cause them to flinch in fear momentarily but not suffice to protect in the long term.

The discussion of its bibliographic history also has a few winks and nods to Campbell’s own writing career, publishers and audience. For instance, the question of whether or not Gla’aki has an apostrophe in its name is mentioned as coming down to an editorial decision by a publisher tidying up the rough work of the author of the Revelations, which could well be a joke about Derleth and Campbell’s early interactions. Likewise, there’s a mention of a hoax version of the Revelations being put out as a prop for RPGs, which presumably is a reference to how products for the Call of Cthulhu RPG have made extensive use of Campbell’s Mythos additions over the years. (In fact Gla’aki – apostrophe intact – plays a major role in one of the introductory adventures in the new Call of Cthulhu rulebook.)

Aside from the nostalgia, this is a Campbell creepfest in his by now very familiar mode, with most of his usual bag of tricks. Double meanings in everything people say to the protagonist? Check. The narration offering tenuous rationalisations of what the protagonist is seeing which conceal what’s actually going on? Check. The protagonist having this adversarial relationship with their work superiors and struggling through misunderstandings and mistrust in their personal relationships? Check. We’ve seen Campbell do it all before and by now he can probably tell this sort of story in his sleep – though if he is sleep-writing he should probably give Gla’aki a co-author credit.

Still, considering that it’s a fun exercise in writing a story in his classic style to mark 50 years since the completion of the stories that became the Inhabitant of the Lake collection, it’s very effective, with a conclusion that would in the hands of a less skilled author come across as heavy-handed but which Campbell handles deftly. By the end of the story you get a real sense of the genius loci of the town itself, to the point where you can believe in Gulshaw as a real place, as well as in Gla’aki’s fondness for it – and indeed, the old beast itself is treated in an almost affectionate manner, like a big wise old beastie who’s got funny ways of showing its affection. Given all the extent to which Gla’aki has benefitted Campbell since he promulgated the spiny slug’s word to the world half a century ago, it’s only fair that the beastie gets to enjoy its birthday party.