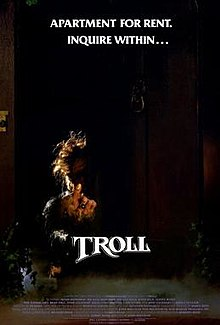 Though primarily marketed as horror, this is a bit more of a genre mashup – a sort of horror-fantasy-comedy mashup where I’d actually say the balance is more towards the fantasy-comedy end instead of horror. (If it didn’t hail from 1986 it’d be a natural fit in the urban fantasy subgenre, but that hadn’t really crystallised at this point.) Some of the comedic touches are overplayed – like an extended slapstick sequence during a fire alarm which comes a bit too soon after Wendy gets kidnapped to feel comfortable – but others are a bit more well-judged, like how Harry Sr. fails to overhear Jr. calling for help because he’s absolutely rockin’ the shit out to Vanilla Fudge’s cover of Summertime Blues. Perhaps the best example of the comedy serving the needs of the other components of the movie, though, is the way Harry Jr. – who, remember, is not the one from Hogwarts – realises that Torok-Wendy is a fake by watching a magnificent, shot-for-this-movie spoof of Invasion of the Body Snatchers.

The movie also benefits from a surprisingly capable cast for a B-movie of this calibre – in fact, I can’t think of a single Charles Band movie where there’s better acting chops on display. Sonny Bono – yes, the one who Cher used to work with and who was a Senator for a bit before he died – appears as the sleazy upstairs neighbour, a leering swinger who could have essentially provided the model for Glenn Quagmire in Family Guy. The Potter family – no, not the ones from Hogwarts – gel really nicely, giving the impression of having an actual family chemistry going (including what contextually seem to be long-running family jokes and gripes, like Harry Sr. – not the Hogwarts one – and his beloved record collection, which includes all the Jethro Tull you expect from a somewhat dorky guy of his generation). Playing Wendy must have been super fun for Jenny Beck – she gets to run riot, be delightfully rude to various adults, play with cool puppety things, and generally have a fun time of it.

Phil Fondacaro is the actor with dwarfism who plays Torok, but he’s also cast as Malcolm Malory, a literature professor and one of the residents of the apartment block who befriends the Potters – not the Hogwarts ones – and he’s easily the deepest and most interesting of their neighbours. Malcolm’s disability is central to his plot, but in a way which gives Fondacaro a chance to sit there and emote about the experience of growing up with his condition, and if you can find a 1980s genre movie which gives a role even remotely that meaty to a little person then I’d be glad to know it because I certainly can’t think of one (except for maybe Time Bandits). The scene also gives additional depth to Torok, since Torok opts to turn Malory into an elf out of a twisted sort of sympathy for him – which adds a new dimension to what has previously seemed like nothing more than a gruesome kill-spree. (Apparently, the Malory role was originally written for Fondacaro, and the original plan was that the Torok role would go to a puppet – but instead Fondacaro got to do the dual role thing.)

The script is by Ed Naha, based off a story idea from an uncredited Joanna Granillo, and as corny as it sometimes is it works more effectively than it’s often given credit for. Eunice’s backstory as a princess who dropped out of that life to be a witch is pretty badass, and the way she transitions from being the prim neighbour upstairs to a badass who strides about the apartment complex, wielding an amazingly beautiful spear and blasting bad faeries with lightning bolts. John Carl Buechler does an excellent job directing too – whilst the special effects and the monster costumes are a bit dated, they’re far from terrible, and the sense that the apartment complex has been overwhelmed by a parallel fae dimension is really nicely communicated within the scope of the limited budget. It’s particularly impressive given that it’s his debut full-length movie – his previous major directing credit being one of the segments of the bizarre multi-director Charles Band mashup The Dungeonmaster, the poster of which appears in the bedroom of Harry Potter Jr. – not the Hogwarts one.

At the end of the day this weird vision of a little enclave of fairyland in the midst of urban America, the darkness that often implies, but also the mild sense of wonder that’s often involved (Eunice’s little singing mushroom pet captured my heart) is actually pretty compelling, and I suspect part of the reason the movie got a rough reception was that it didn’t quite fit the expectations of horror audiences of the time. Critics savaged it at the time, but it made its money back and more at the box office (over double the budget on opening weekend, in fact) and gained a certain cult following – hence Troll 2 being given the title – and there’s a certain Sandman-y, Changeling: the Dreaming-ish quality to all of it which makes me feel like it’s ahead of its time.

Like Changeling, it’s got this somewhat problematic angle of medieval European-style faeries apparently existing in the United States, with Native American folkloric entities entirely absent, but the history given is both vague enough to avoid directly making a call on the reality or not of Native American folklore and also gives a possible rationale. (Eunice talks of the old days when faerie and human worlds coexisted as being a time before there were any countries or borders, so given this cosmology it seems like it’d make sense that entities from this prehistoric dreamtime of any cultural stripe could potentially show up anywhere in the world.)

Perhaps another issue with its initial reception was the way it seems to slightly fall between two stools – a lot of the fantasy stuff seems, if not directly aimed at children, at least intended for a family-friendly movie, but Sonny Bono’s sleazebag character and some of the more ghoulish transformation sequences would respectively confuse and outright terrify younger children. 11 year olds who think they are getting away with something naughty by watching it will love it, as will anyone who’s willing to allow their inner child to be entertained for a couple of hours.