The Gods of Eden is nothing less than an attempt to write a history of the world from its creation to the present day, and detailing how since prehistory a secret Brotherhood has manipulated society. Generally-accepted history is merely a scam, a cover story designed to obscure the Brotherhood’s role and to advance its agenda; when you peel back the curtain and look at the real story, which Bramley is happy to share with us, it becomes evident that the march of history is shoving us in a very dark direction indeed, as the Brotherhood speeds up their plan to establish a New World Order in which a world government exerting mass mind control will attempt to spiritually deaden us to prevent us attaining collective enlightenment. 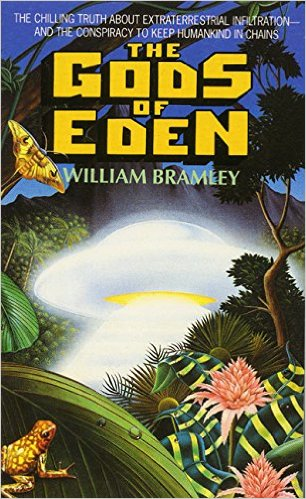 The cruellest irony is that the Brotherhood, originally called the Brotherhood of the Snake, used to be benign – having been set up by one of the aliens who created humanity back in ancient days (whose deeds are recorded in Sumerian myth) in order to slip the truth out to us regular humans. Over time, however, the Brotherhood was infiltrated and corrupted by the more malevolent aliens, who realised that it made a very convenient basis for a secret government of Earth which they could use to pull our strings indirectly, and who used it to establish more or less all mainstream religions, either by fabricating them wholesale or by corrupting them and steering them away from their founders’ original intent. Only by waking up to the Machiavellian manipulation which keeps us warring constantly against each other can we face down these aliens, which the book refers to as the Custodians, and free ourselves from their manipulation.

Say what you like about the pseudonymous William Bramley, he certainly went broad and deep with his research for The Gods of Eden. Sure, the start of his story might have been cribbed from Zechariah Sitchin and Erich von Daniken, but from there he ends up going deep into a wide range of weird areas. In particular, Bramley is evidently quite well-read on occult and mystical topics, devoting much page count to matters Rosicrucian and Masonic and even takes a deep dive into Mormonism. He does not seem to be very discerning about where he gets his information from, mind – like many seekers after mystical knowledge of a certain age he seems to have been keen on the Rosicrucianism-by-mail outfit AMORC and its writings, and he also puts a lot of stock into the comprehensively discredited The Spear of Destiny by Trevor Ravenscroft.

But perhaps his biggest weakness as a researcher is the way he seems to consider L. Ron Hubbard to have been basically on the money.

Yes, if you know what to look for you will soon spot that Bramley at least partially buys into some Scientology concepts. His reference to a “third party factor” behind most conflict comes from Scientology, and the way he explains what he believes to be the spiritual basis of human beings (and, in particular, the idea that we are spiritual entities who can actually function better exteriorised from the body rather than inside it) is more or less 100% compatible with Scientology. He also breaks down a difference between “Custodial Religions” – those designed to control us, into which you can slot more or less all mainstream religions and a large number of non-mainstream ones at that – and “Maverick Religions”, whose tenets would tend to promote freedom from the Custodial trap. The qualities that Bramley ascribes to Maverick religions are more or less all recognisable as lies Scientology tells about itself.

Bramley does not reference Scientology directly, however, except for one reference in a footnote to an L. Ron Hubbard book right at the end and a few Hubbard mentions in the bibliography. Even then, the examples he uses in place of Scientology, like Buddhism, are those which Hubbard himself tended to use when he was willing to admit that his thinking was based on any prior philosophy at all. I could go on, but I don’t need to: Jim Keith, who was himself an ex-Scientologist who dropped out of the Church a few years before he reinvented himself as a conspiracy writer with an odd mashup of libertarian and counterculture ideas up his sleeves, wrote a fairly detailed article here breaking down where all the Scientology stuff is in the book, and why Bramley presents it in the way that he does.

Keith falls short of suggesting that the Church of Scientology itself was behind the book in order to use it as a covert means of slipping their ideas into the UFO community, which shows restraint on his part. As it turns out, the Church wasn’t actually happy about the book either; a bit of research reveals multiple posts on the Ex Scientologist Message Board, in which a number of different former Church members corroborate that Gods of Eden was put on the Church’s banned books list and Bramley was declared a Suppressive Person for “squirreling tech” – in other words, taking Scientology ideas out of context and republishing them to make money off of them.

Helpfully, one of the posters in that thread includes the internal directive issued on the subject by Scientology’s leadership:

This identification of “Bramley” as Tore Dahlin, an (apparently now retired) lawyer, is credible; in my edition of the book the copyright is cited not in the name of William Bramley but the “Dahlin Family Press”. The “squirrel group” – if it even existed – was probably one of numerous groups who tried to apply L. Ron Hubbard’s ideas outside of the context of the Church of Scientology – the so-called “Free Zone” factions – despite the fact that many of the Church’s structural problems and endemic abuses arise directly from ideas and philosophies espoused by Hubbard. (Ex-Scientologists often need to take a while to wean themselves off the Hubbard even after they have split from the Church.)

Later in life Dahlin directed the drag themed comedy-mystery Corky’s Hot Ice. (That contact e-mail address on the site is the exact same one Dahlin used both as a contact e-mail for his attorney’s office and to post some chemtrail-themed conspiracy theories to Jeff Rense’s forum.) Between directing Corky’s and sneaking out repackaged Scientology space opera for the UFO crowd, I don’t know which sounds more fun, but I know that neither would have been allowed by the Church hierarchy had Dahlin stuck around, so good on him for making the best of his life after Scientology at any rate.

Ah yes, the fun factor: the nice thing about Gods of Eden is that it presents this massive, all-encompassing conspiracy which takes in all of recorded history, and it does so in an entertainingly readable way. It’s a page-turner stuffed with utter nonsense, and other than its generically anti-religion bent there’s no hate in it (and even then it tends to regard most religious founders as having basically good motives which got hijacked). The most contentious part of the book, to me, was when Bramley pushes the Scientology idea about all psychiatric drugs being across-the-board bad; whilst nobody would disagree that overprescription of said drugs can be a problem, I also know people who absolutely need their meds to have a full and fulfilling life and lack of access to the medicine you need to get by is surely as big of a problem, if not more of a problem, than being given medicine you don’t need.

There’s a certain audacity when it comes to Bramley’s implications of the Black Death being caused by aliens dumping biological weapons on medieval cities from UFOs. The cleverest thing about the theory is that, since it has the aliens set up a network of human collaborators early in recorded history (and suggests that those collaborators are found in literally every culture), Bramley gets out of having to persuade the reader of the reality of alien visitors based on modern UFO reports, unreliable as they are; all he has to do is persuade you that Sumerian myth records an alien intervention on Earth and then he can pull out the Custodians as a proven factor whenever he likes after that.

It’s rare to find conspiracy theories these days which are simultaneously so broad-spectrum off-the-hook bizarre and at the same time so innocent. Just look at that delightful New Agey cover art, with that badass little fwoggy watching the UFO land: I can’t help but love it.