In a world where nobody wears a bra and everyone makes sure you can tell they aren’t wearing a bra, single mother Maddy Simmons (Louise Lasser) and her boyfriend (Bill Cakmis) go along to a drive-in performance of an R-rated horror movie – with Maddy’s twin 11-years-ish-old sons, Terry and Todd, sleeping in the back. In the middle of the movie, the twins wake up and Terry finds himself a nice, sharp axe, hacks up a dude in another car, and then hands over the axe to Todd and smears him with blood to frame him. Ten years later, at Thanksgiving dinner Maddy announces that she’s gotten engaged to new squeeze Brad King (William Fuller), manager of the Shadow Wood lakeside housing development where they live, and receives the news that Todd (played as an adult by Mark Soper) has escaped from the special school they sent him to – but not before regaining his memories of that night and telling his therapist, Doctor Berman, the truth about the events. 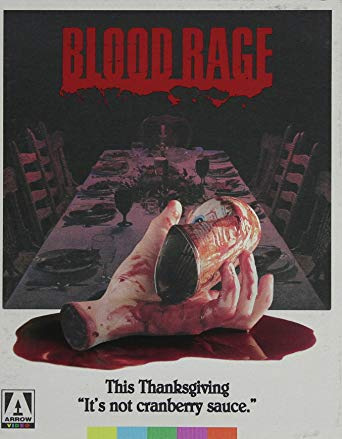 Well, Terry (also played as an adult by Mark) isn’t having any of that, and he’s decided that a good old-fashioned killing spree is just what’s called for: after all, the more over-the-top, gruesome killings he can pull off tonight and pin on Todd, the longer Todd will be put away for and the better chance Terry will have of getting away with the original murder. With Todd making his way home and much confusion between the twins ensuing, the scene is set for a sort of slasher movie take on The Comedy of Errors. Can Todd get anyone to believe him – and can Terry really get away with his terrible scheme? Will everyone keep their cool, or will someone end up losing their temper and flying into a… Blood Rage?

This movie has a somewhat messy history. It was originally made in 1983, just as the early-1980s slasher boom was getting well and truly oversaturated, and ended up shelved – probably because in that same oversaturation it couldn’t find a distributor. It probably didn’t help that it’s set at Thanksgiving, and slasher movies following the Black Christmas/Halloween/Friday the 13th formula on riffing on notable days in the calendar were especially overdone by that time – though I’d say that this doesn’t draw on Thanksgiving themes as much as, say, New Year’s Evil exploited its New Year’s Eve theme.

Luckily for the movie, whilst the genre did undergo a slight dip back in 1983, it regained its footing quickly and kept going for the a good while longer – as you can see from the impressive list at A Slash Above, the bottom didn’t fall out of the slasher movie scene until the end of the 1980s – so it eventually got a straight-to-VHS release in 1987 (with, simultaneously, a limited release in theatres). Confusingly, the different releases came under different names – Blood Rage was the title when it came out on VHS originally, Nightmare at Shadow Wood was applied to the theatrical release and cable TV reruns, and the print Arrow Video used to make their recent blu-ray reissue of it was apparently entitled Slasher.

The latter title might have been set aside as being slightly too on the nose. On the face of it, this movie follows the slasher movie formula like it’s ticking off boxes on a checklist – there’s at least one exploitative shower scene, there’s dark woods next to a lake, you’ve got big old machetes and twitching, dismembered body parts all over the shop and so on. However, the direction by John Grissmer actually puts an unexpected spin on proceedings. For instance, although there’s a lot of inventive gore and a bunch of people are murdered, the movie doesn’t actually linger on the murder act as such – you usually see the killings begin, and you often see gruesome details of the aftermath, but you don’t see the whole grisly show. (The film’s general stance seems to be that showing someone in the process of actually being killed should be done sparingly, but after death has occurred corpses and body parts are fair game when it comes to giving someone a scare or throwing in some morbid comedy.)

On top of that, the movie does a better job of depicting mental health issues – and people’s prejudices about them – than I expected of a film of this era, let alone a slasher movie. For instance, when Karen (Julie Gordon), who is keen on Terry, mistakes Todd for Terry and starts to demand sex from him until Todd points out she’s making a mistake, she runs off and tells people; when recounting the incident, she hypes up how Todd had these mad, frenzied eyes, when actually when you see Todd he doesn’t have anything of the sort – if anything he looks confused and sad and out of his depth. An uncharitable person would interpret this as a contradiction, but I think it’s more a matter of Karen filling in those details mentally because she’s been primed to expect that Todd is a swivel-eyed axe murderer.

Mark Soper, by the way, does an excellent job playing the adult duo – one rendered quiet and strange by a combination of wrongful institutionalisation and the trauma of seeing his own brother spontaneously and pointlessly murder someone, and the other cool, confident, and not emotionally affected by the grim work he’s doing in the slightest. (Louise Lasser also has a good turn as Maddy, who starts off flatly denying Todd’s claims but eventually finds herself coming apart at the seams whilst talking to the telephone operator, trying to get in touch with Brad – a moment rendered even bleaker because we know he’s already dead at this point.)

In short, what we have here is a major reversal of the formula of so many slasher movies. We know who the killer is right from the beginning, leaving us in the position that we know about the switcheroo at the start but most of the characters in the movie don’t. Indeed, the whole “innocent twin went to the institution, guilty one stayed free and has actually been doing the killings all along” is the sort of plot point which lesser slashers would have saved for a climactic plot twist – whilst at the same time hinting at so ham-fistedly that only especially inattentive audience members could possibly be surprised by it. Blood Rage, despite its lowbrow title and insalubrious subject matter, clearly isn’t out to insult the intelligence of its audience – or, for that matter, to fetishise the act of murder itself – making it several notches more interesting than most of the movies it shares this subgenre with.

One thought on “Not the Thanksgiving Turkey I Expected”