12-year-old Zelia Lor is the daughter of starfaring archaeologist Elise Lor. When the Terminator-esque Necrons attack a world that the Lor family are conducting excavations on, Zelia must hustle to escape. Zelia is separated from Elise in the evacuation, but ends up forming a small posse of survivors along with two kids about her age – Talen is a rough boy who fell in with the underhive gangs when he ran away from home to avoid being pressganged into the Imperial Guard, whilst Mekki is a young acolyte of the Adeptus Mechanicus who Elise has been caring for. Escaping the planet in the company of Erasmus, assistant scholar to Elise, they soon encounter Fleapit – a Jokaero, a member of an orangutan-like race of hyper-intelligent gadgeteer apes, who only Mekki can properly understand. However, there’s still a Necron Hunter on their trail. Are they just having really shitty luck, or is there a reason the Necron is so intent on catching up with them? 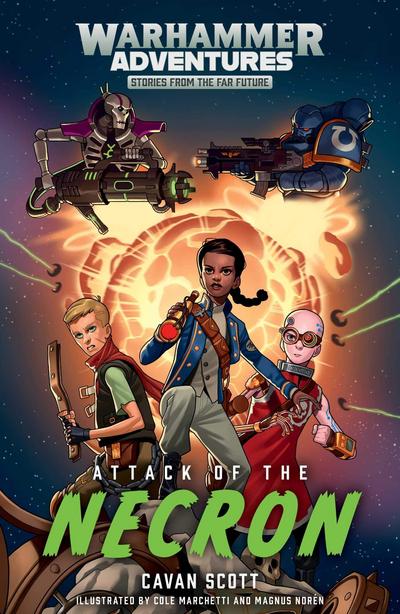 Attack of the Necron is the first book in the Warped Galaxies series of Warhammer 40,000 novels. On top of that, Warped Galaxies is the first series of 40K-related books to come out under the banner of Warhammer Adventures – a new category of Black Library books consisting of stories aimed at kids. The general reading level is 8-11ish – so we’re not talking YA, more the sort of reading level of the first couple of Harry Potter books.

This has been the subject of much wailing and gnashing of teeth in the more gatekeeperish corners of fandom, but I for one welcome this. It’s consistent with a more general move by Black Library to diversify its offerings (after going through a bit of an all-Space Marines all the time phase lately), which includes other new imprints such as the upcoming Warhammer Horror line, which sounds like it’ll be 100% my cup of tea.

On top of that, the fan panic that it’d herald some sort of extensive sanitisation of the Warhammer 40,000 setting to make it more kid-friendly. This is frankly nonsense. Dystopias are hot in YA and kids’ SF/fantasy these days, kids can handle that sort of thing, and the setting as presented here is very much the recognisable Warhammer 40,000 setting.

Nor does the book pull its punches; bad things happen to these kids, they’re regularly in peril, and some of them are dealing with difficult feelings. Talen struggles with the bigotry and prejudices inherited through his upbringing in a very traditional military family, taking a while before he fully trusts Fleapit, whilst Zelia has to balance the ideological opposition to violence she’s inherited from her mother with the immediate need for protection the kids find themselves lumbered with. There’s also hints that Mekki has a bit more backstory to him, though in its 200-odd pages of large text with wide margins the book doesn’t have time to go into that; we’ll probably see more of it in a later volume.

With a diverse cast (Zelia and Elise are clearly described as being black) and more acknowledgement of the fascistic nature of the Imperium (via Talen’s upbringing) than much 40K fiction for adults, Attack of the Necron proves that you can do all of that and tell a story which is appropriate to the reading age in question and be true to the absurd 40K setting. Necrons are grimdark in a distinctly 40K way. Planetary invasions which culminate in a planet blowing up are epic in a distinctly 40K way. Jokaero are a very silly concept, but only have they been a feature of the setting since its 1980s origins but they’re also still in the canon – look, you can still buy a Jokaero miniature and everything – so if you turn your nose up at Jokaero and think they’re too silly, then a) your interpretation of the 40K setting is kind of boring and self-serious and not something I’m very interested in and b) you don’t get to cry and whine about whether Attack of the Necron is or isn’t true to canon because you clearly don’t actually care about canon except as a means for gatekeeping, and fuck that.

On the whole, as a first encounter with the 40K setting, Attack of the Necron is pretty good. There’s little bits here and there where if you already know the setting, you’ll get more out of the story, but there’s not so many of them as to bog things down or make things confusing for those who aren’t aware of those bits of lore. (40K-familiar readers will know the terrible secret of why all the starship viewport shutters close before the ship goes into the Warp, for instance, or the horrible truth behind the old spacer’s stories of “warp sickness”.) Future volumes promise to confront the kids with the Claws of the Genestealer – so another survival-and-scares-type story, then – and the Secrets of the Tau, which might see a gear shift into a more talky episode.

4 thoughts on “It’s Grim and Dark For Kids Too”