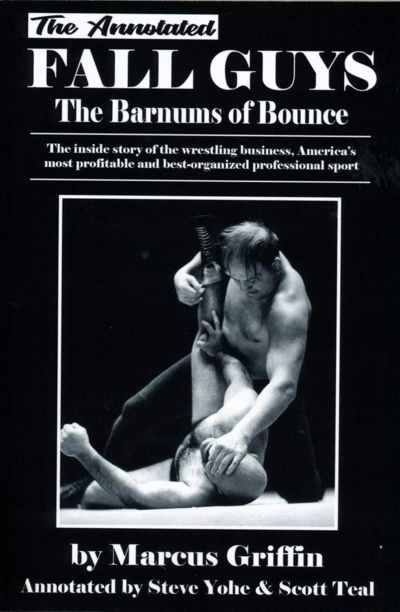 Fall Guys offers an eye-opening look at the early days of American professional wrestling – predating the formation of the National Wrestling Alliance which brought some much-needed co-operation to the scene and put an end to the confusing morass of competing world championship claims that audiences had to contend with and which Griffin depicts here. However, as is often the case with rumour-mongering in the wrestling scene, Fall Guys was itself an attempt to work the audience. Griffin was associated with “Toots” Mondt, one of the wrestling cartel kingpins that Griffin discusses in the book; as such, the book is spun in such a way as to put Mondt and his allied wrestlers and promoters in a subtly better light than their competitors.

This is where The Annotated Fall Guys comes into the equation. Emerging through Crowbar Press, a small press specialising in behind-the-scenes books about professional wrestling, The Annotated Fall Guys takes the original text as offered up by Marcus Griffin and adds in extensive notes from Steve Yohe and Scott Teal, present-day wrestling historians who are able to point out exactly where Griffin is massaging the facts, skewing his presentation, and at points outright making shit up.

As it turns out, the chicanery involved in the construction of this book is extensive. Griffin keeps the timeline of everything a little hazy, to the point where without Yohe and Teal’s fact-checking it would actually be quite hard to follow when everything was supposed to have happened in Griffin’s narrative – which was probably the point, come to think of it – and Griffin tends to play up the success of Mondt’s promotions and make it sound like Mondt’s rivals were pathetic losers who couldn’t draw audiences on the same scale, when that simply wasn’t true at all.

At points the annotated book can be a little hard going, simply because of the sheer extent of the annotations needed to both correct Griffin’s facts and to add additional information and context. Yohe and Teal opt to throw their observations into the flow of the text in a different font, which works fine when the annotations aren’t coming so thick and fast, but there’s points where the annotations are actually overwhelming the main text. Perhaps a better way to deliver this information would be to use footnotes for on-the-spot corrections of fact, and then have interstitial chapters inserted between the original chapters of the book in which Yohe and Teal could review what Griffin had written, explain why Griffin had represented it that way, and then unpack the real story.

Still, the book does give a vivid look into a wild era for the industry, culminating in the New York wrestling war which Fall Guys itself was a salvo in. You see, the very act of breaking kayfabe and spilling the beans about the behind-the-scenes aspects of the business – whilst cunningly including your own propaganda in the behind-the-scenes stuff (trusting that people would assume that just because you are dispelling one illusion, what you are saying must be the unalloyed truth as opposed to a deeper illusion) – was a weapon in that war. Before Mondt had Griffin write Fall Guys, his rival Jack Pfefer had torn back the curtain in a series of newspaper interviews; Fall Guys was, then, a responding salvo to that, intended to make Pfefer look bad (and drawing at points on somewhat dated ethnic stereotyping in its sketch of Pfefer).

Even then, as Yohe and Teal point out this was nothing new. Griffin attempts to construct a story here that before the 1910s and the rise of the likes of Frank Gotch, wrestling was basically a competitive sport like any other, and it was only at that point in history that “worked” matches became a thing and eventually became predominant in professional wrestling, and that the veil of kayfabe had been kept sacrosanct until Pfefer ruined it. Yohe and Teal are able to substantiate that this was far from the case – that, at the very least, the idea that pro wrestling was scripted entertainment rather than competitive sport was common parlance even as far back as the 1910s in newspaper accounts, and that “worked” matches likely dated back to the 1880s in the carnival scene.

Fall Guys by itself would be an entertaining and at points informative read, though its bias would mean you’d need to do a lot of reading around the subject not to get taken in by Griffin. Yohe and Teal have done all of us a favour – and invested new life in Fall Guys itself – by producing this annotated edition, which does a lot of the heavy lifting required in terms of catching out Griffin at his own game. Two against one might not be a fair match – but it’s still a joy to watch.

2 thoughts on “Taking a Note, Taking a Dive”