Content warning: this movie drops some rape at you from more or less out of nowhere.

Catherine Bomarzini (Sherilyn Fenn) has inherited a magnificent Italian castle with enormous statues in its gardens and interiors that seem to be constructed from second-hand sets from Labyrinth. Having lived there in early childhood before moving to America, she’s thrilled to return and catch up with Martha (Hilary Mason), the castle caretaker and her childhood nurse, as well as her old friend from art school Gina (Charlie Spalding) who moved to Italy a while back to work in painting restoration. As Gina visits, the two of them catch a travelling circus act, led by smouldering magician Lawrence (Malcolm Jamieson), and Gina is so taken with the act she gets Catherine to invite the performers over to the castle for dinner. 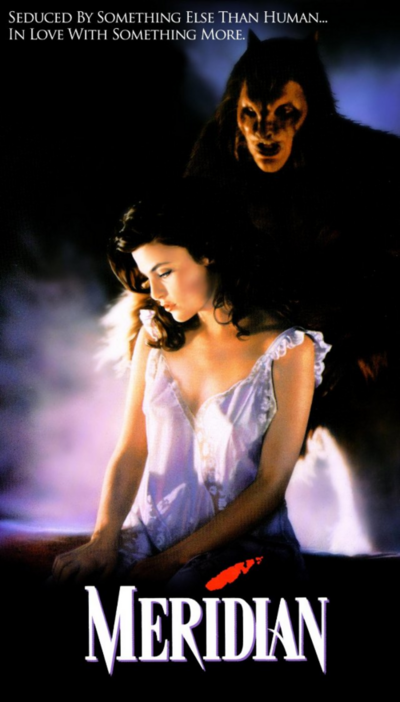 At this point the circus performers drug Catherine and Gina and rape them; specifically, Lawrence assaults Catherine but then switches places with his twin brother Oliver (also Malcolm Jamieson) to complete the act, and whilst Oliver is busy with Catherine, Lawrence rapes Gina for good measure. (It is also strongly implied that whilst Lawrence is busy preparing Catherine for Oliver’s attention, Gina is being gang-raped by most of the rest of the cast.)

Gina and Catherine aren’t thrilled by what happened but decide to not call the police and just deal with it themselves, and go their separate ways. However, Catherine soon finds herself adrift in waves of ghostly visions, as she tries to discern the difference between Lawrence, who looks like a gentleman but behaves like a beast, and Oliver, who behaves like a gentleman but sometimes turns into a terrifying monster. Meanwhile, when Gina gets back to work she sets to restoring an ancient painting donated to the local church that seems to depict an ancient scene that might shed some light on the tragedy of Lawrence and Oliver.

To be honest, the rape stuff is a difficult thing to get past when assessing Meridian, particularly since in the moment it’s played like this is something tantalisingly darque and gothique but in the aftermath Catherine and Gina don’t react to it like that – they react, in fact, like they’ve been drugged and date raped, which is exactly what happened, and Lawrence attempts additional rapes later on in the film at that.

The whole thing seems to consist of director Charles Band trying to have his cake and eat it by utilising two distinct sorts of romantic fiction rape trope at the same time; Lawrence rapes because he’s the hateful, selfish, rakish sort who does that to establish that he is a wrong’un, whereas Oliver rapes because he is so passionately moved despite himself that he cannot help but lose control, but he’s also decent enough to recognise that he’s been a cad and try to redeem himself (a bit like the male lead in that romance novel Games Workshop accidentally published a while back).

To be honest, I’m not the best person to judge the use of these conventions against the mass of fantasy-flavoured romance fiction out there, but ultimately you probably know what you feel about this sort of thing: if you think the notion of a gentle, romantic rape scene is offensive, or risible, or otherwise a dealbreaker for you, then inevitably you are going to have problems with the premise of the movie. (If it isn’t a dealbreaker for you… then the movie’s cheap execution might still turn you off anyway.)

Beyond that, this is an unusually ambitious attempt from schlock-master Charles Band (whose repertoire ranges from Subspecies to Evil Bong). The movie bounces about in its early stages between horror, fairytale fantasy and romance, and as the plot comes into sharper resolution one of those genres just has to give way to the others. Eventually it’s horror that loses out – between the unambiguously happy ending, the failure of bestial-Oliver to look at all scary (and I’m pretty sure you can see the gap between the back of his mask and his neckline in some shots), and the shift in emphasis in Charlotte’s visions from disappearing murder victims and violent rape scenarios to more gently fantastical situations there isn’t a whole lot to be scared of by the end of the movie, even though there’s plenty of menace in the earlier segments.

It’s really, really hard to watch Sherilyn Fenn in this and not be reminded of Audrey Horne from Twin Peaks, partly since she plays Catherine as a much more caring and idealistic version of the same, partly because so far as I can make out this was a made-for-TV or straight-to-VHS movie (the 88 Films DVD I watched has it in a 4:3 aspect ratio, which is apparently the original and correct one and a sure sign that this was never intended for the cinema screen) and a lot of this resembles the sort of schlocky, syrupy televisual nonsense the residents of Twin Peaks would watch themselves.