Cavan Scott’s Warhammer Adventures: Warped Galaxies series of Warhammer 40,000 novels for kids continues with its third episode, Secrets of the Tau. The kids have finally managed to get off the freezing, Genestealer-infested world they were stuck on since the closing sections of Attack of the Necron, having hitched a lift with Amity, a mysterious Rogue Trader who is very keen to avoid questions about why she has no crew left beyond the servitor Grunt. 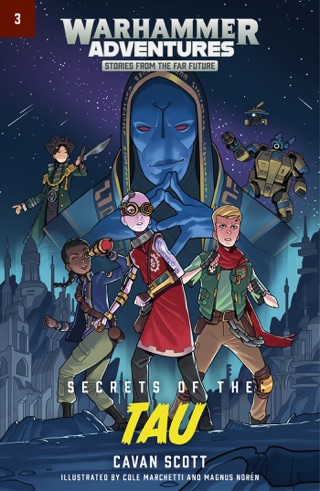 Zelia, Talen, Mekki and their jokaero friend Fleapit still don’t really have a plan for what to do with themselves beyond rendezvousing with Zelia’s mother at the mysterious “Emperor’s Seat” – and checking Amity’s star charts revealed that in the course of their adventures they’ve ended up inadvertently flung to the other side of the galaxy entirely from where they started out, more’s the pity. Taking pity on them – and perhaps taking into account the potential archaeotech reward from Zelia’s collector mother – Amity takes them to Hinterland, an independent space station where humans and xenos rub shoulders in an uneasy truce, and where a cartographer friend of Amity’s just might have the information on where the Emperor’s Seat is…

After two books of breakneck action, Secrets of the Tau lands the Warped Galaxies protagonists in the middle of an actual society, though it’s not the mainline Imperial society that they’re used to. Naturally, this means they end up encountering various xenos, with the Tau playing a major role in this book’s plot; highly unusual for many Warhammer 40,000 stories, in theory, but it’s actually all par for the course for a Rogue Trader, and Games Workshop seem to be keen on emphasising the idea of frontier space stations where members of the different cultures of the galaxy might not immediately shoot each other on sight. (Compare with the space station Precipice from the Blackstone Fortress boardgame and tie-in novel.)

The nice thing about this setup is that as well as allowing the kids to get a look at Tau culture without being so immersed in it as to buy into the propaganda, but it also distances them enough from Imperial society that it’s possible for more doubts about it to be teased out. The hideous truth about servitors is hinted at – as well as the fact that the facts about servitors and servitorisation is kept from average citizens as a matter of routine – thanks to the presence of Grunt, and Talen clearly suffers from culture shock and starts racially abusing aliens motivated by his xenophobic upbringing.

Most importantly, it’s clearly implied that all this is a bad thing and the Imperium might not be such a good thing – particularly since the kids’ best ally, Amity, is clearly operating outside the law, and the most prominent representative of Imperial authority – an Ordo Xenos Inquisitor – is beginning to feel like a bit of a threatening figure as he follows the trail of our heroes.

We’re getting to a point where our characters’ values are being seriously challenged in other ways too. Zelia has been a pacifist and refused to use weapons so far, which is becoming increasingly unviable when it comes to self-defence; she still sticks to her pacifist values mostly, but she does take to carrying non-lethal weaponry (flash grenades) as a means of protecting herself. We’re also seeing a bit more of Mekki’s mystery past; his willingness to mess with Tau technology suggests that he’s not a wholly orthodox Mechanicus, as is a passing mention that he didn’t so much leave Mars as escape it.

The next episode is War of the Orks, so whether or not Zelia fires a weapon herself, there’s bound to be plenty of dakka to go around. It’s coming in November 2019 and I’m eagerly looking forward to it, but also wondering how much of the series we have left. It’s clear we’re going to meet most of the xeno races – there’ll likely be an Eldar book, in that case, and possibly a Tyranid book if it’s felt that the Genestealer one hasn’t already covered that territory. But will there be separate Eldar books for the craftworld Eldar, exodites, dark Eldar, and Ynnari? Are we going to have any books about aliens who don’t have their own army books, like Jokaero (perfect chance for a Fleapit-focused episode) or Hrud or Kroot (if it’s felt that the Tau episode didn’t exhaust the possibilities there)? Will there be an episode for the Imperium as a whole, or various Imperial subfactions? And perhaps what I’m most curious about, will the kids learn about Chaos?

4 thoughts on “Mini-Review: Just Say No To the Greater Good, Kids!”