Usborne’s World of the Unknown: Ghosts was the first book the nascent children’s publisher put out, back in 1977. Penned by Christopher Maynard, it was a lavishly illustrated introduction to the subject that took up a slim 32 pages. Despite the brevity that format forces on him, Maynard is able to go into surprising depth – offering a range of ghost stories ranging from the well-known to the surprisingly obscure, along with an overview of ghost-hunting practices and sceptical explanations of significant hauntings. 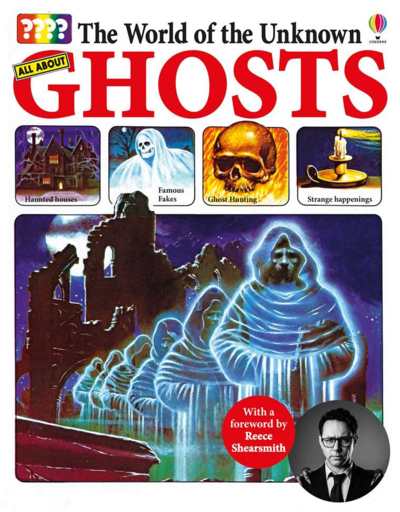 As the first release from a new publishing house, it’s not a bad choice – you’ve got exciting subject matter, you’ve got a vivid presentation of said subject matter, and you have a larger form factor which makes it stand out. Compared to, say, the twee and tame subject matter of the Ladybird series, and you’ve got the Usborne difference as it was at the time perfectly expressed: whilst some children’s publishers took the view that kid’s books should be soothing and charming (at the risk of being boring), Usborne’s material was often a bit more exciting.

Arguably, in fact, Ghosts was basically a pre-teen’s equivalent to the sort of occult coffee table books that I’ve covered here before from time to time – and when you pitch it that way, I can’t imagine other publishers from the era putting out something similar. The World of the Unknown books were some of my favourites in the library at school, and it’s delightful that Usborne have reprinted this first volume for new generations to shiver over, with an introduction by Reece Shearsmith being the only new addition over the basically can’t-be-improved-on original.

3 thoughts on “Mini-Review: World of the Unknown – Ghosts”