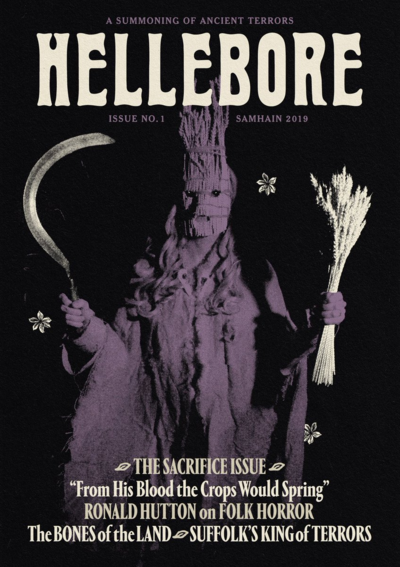 Hellebore is a rather quixotic effort – a periodical about folk horror done as a physical magazine rather than a website. My feeling on such items is that there’s definitely a place for hard copy periodicals still in this Internet age, but if they’re going to thrive it needs to be on the strength of high-quality content and a form factor which makes them a pleasure to read in hard copy as opposed to online. If you want to put out a zine which is essentially dispensable tat and unqualified opinion-mongering, the Internet is a superior delivery mechanism for all of that; physical zines today need to aim to be something people will want to keep around on their shelves for longer than zines in ages past.

Broadly speaking, this debut issue of Hellebore succeeds. The physical object itself is a nice, compact item, printed in three colours (black, white, and eerie purple) and with an overall graphic design reminiscent of, say, an Electric Wizard album booklet. (This is not a slam: I am a big fan of Electric Wizard and a particular fan of their aesthetic.) The magazine is also clearly conscious of the wider context of the material it’s looking at; fascistic and racist elements do have a way of creeping into folklore-connected scenes. (Witness the plague of them infesting the folk horror-adjacent neofolk musical genre; witness, for that matter, the way the Nazis drew in part from far-right elements of the interwar German volkisch movement.) In this context, it’s welcome to see Hellebore taking a stand against this; in her editorial, Maria J. Pérez Cuervo overtly declares the magazine to be opposed to fascism in all its forms.

This stance is backed up by a brief little sermon by David Southwell at the end of the book about how “re-enchantment is resistance” and how magic is intrinsically anti-fascist in nature; given the rise of neo-fascist occult groupings like the Order of Nine Angles and their all-too-real role in modern-day extremism (witness the connections between the O9A and the terroristic Atomwaffen Division), I feel like this is a bit much. Esotericism is not a panacea against far-right extremism and, indeed, has very often provided a haven for it.

Southwell’s article is too brief to explore this, and therein lies the problem: he doesn’t have space to go into a deep dive on how neofascist movements attempt entryist tactics in folk movements or in occult circles, or how both fascist and antifa forces have attempted to leverage magic to their benefit. He only really has space to offer some platitudes; this makes his rather useless article stand out against the rest of the material in the magazine, all of which goes into somewhat more detail on its chosen subject.

This is the “Sacrifice issue” (I like the Process Church-style theming of issues and hope it continues!), so the articles often revolve around such themes. Pérez Cuervo’s own article makes a plausible argument that the most definitive trope of folk horror – hideous sacrifice in a countryside locale – is essentially picking up on a tradition in horror fiction which itself draws on the theories of Frazer’s The Golden Bough or Murray’s The Witch-Cult In Western Europe. Mercedes Miller offers an analysis of M.R. James’ Lost Hearts and its possible real-life inspirations.

Katy Soar offers a history of how various folkloric beliefs have attached themselves to stone circles – sometimes with academics buying into them in the absence of evidence, such as the notion that megalithic stone circles were sites of human sacrifice operated by druids. (The druids, as encountered by the Romans, were an Iron Age culture who seem to have had little to do with the Stone Age/Bronze Age megalithic constructions across the British isles.) In a similar vein, John Reppion takes a look at the infamous “bog mummies” of Northern Europe and explains why they aren’t necessarily evidence of human sacrifice.

Dee Dee Chainey goes broad rather than deep, offering a random selection of factoids around the theme of animals and animal sacrifice as used in folk magic and healing. The issue also offers an interview with academic Ronald Hutton, who offers a historical context for folk horror in general.

My favourite article in the magazine, however, is Verity Hollowell’s in-depth look at the history of the church of St. Peter & St. Paul in Bardwell, and the astonishing illustrations discovered on the walls there after having been covered up by sternly iconoclastic Protestants during the Reformation. As corrupt as medieval Catholicism was in many ways in terms of its political structures, the aesthetic products of it – especially these cruder, more folk-aligned images provided in a rural church and intended for the education of the common worshipper – has a certain thrash metal style to it which I rather miss.

Hopefully we will see an issue 2 of Hellebore, and hopefully the articles will retain their current depth. It would be great if future issues were thicker as well; if the magazine is going to run on a seasonal basis or whatever, offering a thick treasury of high-quality essays every few months would seem to be the way to go. 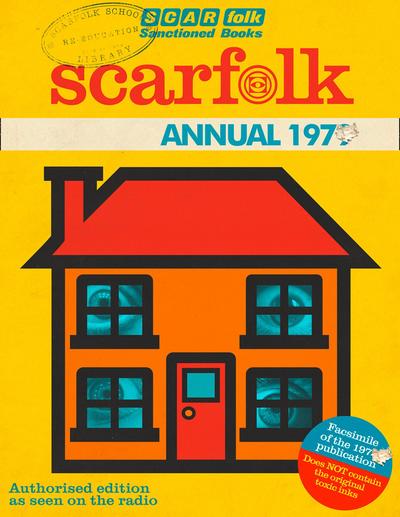 Ah yes, the annual Annual. This is an odd British tradition wherein each year around Christmas comics, celebrities, television shows, musicians, and any other media product with a significant juvenile audience would put out their Annuals – large, colourful books stuffed with images and articles and whatnot, perfect for keeping the kids distracted around holiday time.

The format reached its apogee in the 1970s and 1980s, so it’s appropriate that Richard Littler’s Scarfolk Annual, hailing from an indeterminate year in the 1970s (because, remember, Scarfolk is the town where the Seventies never ended), should exist. As with the sort of Christmas Annual it’s spoofing, it puts a lot of energy into rehashing existing material in new ways – Kak the “Don’t” Owl gets their own little comic, there’s a short story about a visit from the Council Christmas Boy, and so on.

In less skilled hands, this would seem redundant, but Littler is very skilled at taking his material and moulding it into startling new configurations; he did it with the Discovering Scarfolk novel, after all, and he largely succeeds here. There’s also enough fresh material here to make the book a useful piece of the puzzle in its own right, along with a healthy frustration with the entire miserable subject of Brexit. Enjoy responsibly within Council-approved boundaries.

One thought on “Fresh Folk Horror For the Darkening Seasons”