Back in April I covered the initial (original) books to come out from the Warhammer Horror line from the Black Library – a new imprint dedicated to the spoopier side of the various Warhammer settings – in the form of a short story collection and a triptych of novellas. (The early line was also filled out by a welcome reprint of Kim Newman/Jack Yeovil’s stories of the vampire Genevieve.)

Evidently, this initial experiment has had positive results. Not only have Black Library embarked on a somewhat more ambitious second wave of Warhammer Horror releases, but they’ve also announced Warhammer Crime – an imprint dedicated to stories set in the Warhammer 40,000 universe, which I guess would make a sensible home both for material inspired by the more sleuthing-based entries in the Eisenhorn or Ravenor series, or more police procedural-oriented material like the Enforcer trilogy. (Incidentally, if Warhammer Crime wanted to start with a bang, I’d say that a fourth Shira Calpurnia novel would be very welcome.)

The fact that they’re doing this suggests that not only do Black Library realise that there’s a substantial audience for Warhammer-related stories which do not focus on the full-blown warfare, combat action, and adventure fiction which makes up the backbone of the Black Library line, but they also realise that their range has now become sufficiently expansive that it’s become increasingly difficult for that audience to find what scratches their itch. If the proliferation of these imprints leads to an overall increase in the range of different types of stories offered by Black Library, that’s all to the good. 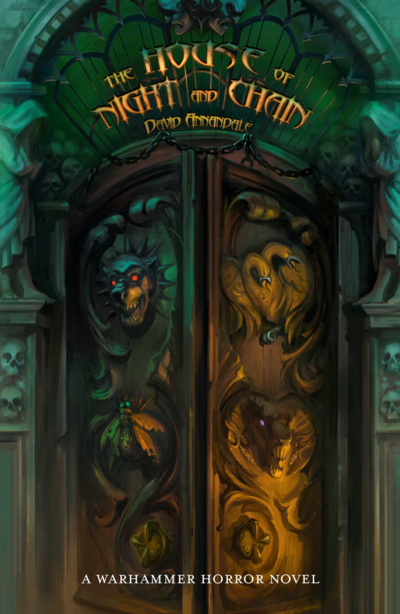 However, before Warhammer Crime debuts I’ve got some fresh new Warhammer Horror to enjoy, and in particular the first all-new full-length novel to be released in the line. This is The House of Night and Chain by David Annandale, who’s become something of a stalwart of the line, having contributed both to the Maledictions short story anthology and to the novella collection The Wicked and the Damned.

I wasn’t too impressed with The Last Ascension of Dominic Seroff, Annandale’s short story in Maledictions; it was a “bad things happen to someone as a judgement on their character flaws” type of story, but I felt that it didn’t really have the page count needed to make me really care all that much about the protagonist – with the result that I didn’t really care when bad shit happened to them. The Faith and the Flesh, his contribution to The Wicked and the Damned, I felt was the weakest novella in that collection – but that’s because I thought the other two were very, very good indeed, and I’d say that The Faith and the Flesh was a significant improvement over Last Ascension in general, with Annandale being able to use the increased page count to good effect. (In particular, I felt that it had fleshed-out characters that I actually cared about, which is what the previous story was missing.)

The House of Night and Chain is, I’d say, Annandale’s best contribution to Warhammer Horror yet, and might be the best Warhammer Horror story to be released so far, and that’s largely because the novel format works best for Annandale’s general approach to horror. The book’s 283 page count gives him sufficient space to fully develop his characters and make us truly despair for their terrible fates, and each and every one of those 283 pages is used with skill and purpose. No incident in the book is without purpose; even sections which seem to be there mostly for worldbuilding filler end up having their place in the overall picture that Annandale is painting.

The premise of that picture: Colonel Maeson Strock is the patriarch of the Strocks, the noble line which has held the Planetary Governorship of Solus for generations. As long as the Strocks have governed the world, their seat of power has been Malveil, their ancestral mansion beneath which they acquired the vast mineral wealth which propelled their rise to power. The Imperium’s demands, however, give little regard to local politics. Despite being the heir to the governorship, Maeson was called up to duty in the Imperial Guard, and whilst he was away his family has been struck by tragedy.

His uncle, Leonel Strock, spent the last years of his governorship as a recluse – with Maeson having to act as regent before he was called away to military duty – and finally died while Maeson was away. With the rival Montfor family, led by its corrupt mistress Veth Montfor, exploiting Maeson’s absence, Maeson’s wife Eliana, decided to move into Malveil (with their children Katrin and Zander away at boarding school), with the intent of imposing a sense of continuity of power and leveraging her post as an overseer of the Imperial Administratum to try and shore up the Strock family fortunes. Her broken body was found at the foot of a steep drop from the roof of Malveil – officially she jumped, but Maeson cannot rule out the possibility that she was pushed.

Maeson excels in his command role in the Imperial Guard, his career culminating in a doomed defence of a world against a Tyranid hive fleet – holding out for longer than anyone expected and therefore winning major strategic benefits for the Imperium, but at the cost of his mental stability, Maeson reportedly suffering a breakdown towards the end of the fighting. Though he’s pulled himself together since, it would obviously be irresponsible to give him another front line command – but that doesn’t mean the Imperium has no use for him. With the Montfors in ascendance on Solus, they and their criminal connections have become brazen, skimming an unacceptable amount off the top of the planet’s tithes to the Imperium. Sending Maeson home to take up the Lord-Governorship which is his by right and tasking him with rooting out the corruption onworld would be an excellent use of Maeson’s skills, whilst at the same time restoring him to the comforts of a familiar environment, facing off an enemy which, whilst dangerous, is still basically human and nowhere near as awful as the wrath of a Tyranid hive-fleet.

Thus, Maeson comes back to the governorship, back to his two adult children – Katrin having become a prim and proper teacher/propagandist at the Schola Progenium where future Imperial officers, officials, and agents are trained, Zander having become a libertine wastrel who deliberately cultivates a reputation of Bernie Wooster-scale uselessness to protect himself from being drawn into the more dangerous political games happening on Solus.

And back to Malveil, which having consumed his uncle and wife now waits hungrily for Maeson himself…

All this is quite a complex situation, which Annandale very capably manages to communicate within the page count of the novel without ever feeling like he’s rushing things, but at the heart of it this is an archetypal “haunted house” story. You have the house itself, you have its grim reputation and tragedies in its past but also powerful motivations to convince the protagonist to take up occupation anyway, you have a protagonist who doesn’t entirely trust their own mental stability and so doesn’t give the haunting sufficient credence until late in the day, you have a paranormal threat which, by the time that the protagonist realises the broad outlines of its nature and seeks help (from his childhood friend who’s become the Cardinal of the planet, no less) it may well be too late to do anything about it.

As with any story based on a well-worn archetypal formula, it’s not so much the originality of the tropes themselves that is important so much as the skill with which they are deployed, and Annandale is certainly not lacking in skill, but on top of that I’d also say he actually finds some interesting ways to add new twists to the familiar tropes – especially the familiar Warhammer 40,000 tropes.

In particular, whilst in a typical Warhammer novel the bit where daemons from the Warp start manifesting in significant numbers would be expected to be the height of the crisis, but in fact there’s worse horror yet to come after that. Elsewhere, some of the Montfor material risks being a lazy reiteration of the sort of “hurr BDSM = evil and bad and also kind of sexy but we’re going to get away with depicting it by pretending we disapprove” which Games Workshop has been guilty of off and on since the 1980s, but by the end of the novel that angle is actually quite cleverly subverted. (Likewise, “Praying hard enough to the Emperor solves everything” and “The Inquisition can deal with anything”, whilst not actually being axioms of the setting, are often treated that way by Black Library authors; Annandale doesn’t fall into that trap.)

On the whole, The House of Night and Chain doesn’t quite set a new bar for Warhammer Horror material to clear – I’m still a little more fond of the other two novellas in The Wicked and the Damned, and you’d need something truly special to outclass Drachenfels – but it’s the closest any book in the sequence has come to yet in terms of having a consistent level of quality and in terms of having a strong story to tell.

3 thoughts on “The Fall of the House of Strock”