A big part of the appeal of The Dark Crystal and Labyrinth – aside from the fact that they’re genuinely creative fantasy movies which cut the bullshit and just get on  with their plots and demonstrate the genius of Jim Henson and his workshop collaborators in their capacity to make puppets and costumes which seem genuinely alive – is their aesthetic. In both cases, the movies have a cohesive look which is clearly the work of a singular vision and in The Dark Crystal in particular gives the impression of a world with a deep history and ecosystem which we only brush the surface of. 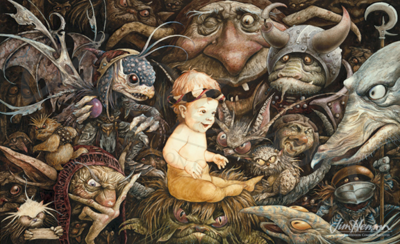 Brian Froud is, famously, the man we have to thank for that, which makes me wonder: what would Jim Henson have produced had he instead decided to call on the talents of some other in-vogue British fantasy artist of the era? Let’s have a play and find out, for each artist proposing one movie in the Dark Crystal slot, one in the Labyrinth slot. The Dark Crystal slot is for a movie steeped in a well-realised secondary world with no apparent connection to Earth after all and a deep lore and backstory implied; the Labyrinth slot is for a movie about someone from our world having a little adventure in a world inspired by the artist in question’s work in which they come away with an appreciation of both the power of imagination and the necessity to harness it purposefully rather than wallowing in daydream or something like that, with a musical score provided by a musician popular in the 1980s who also plays a role in the film.

This is an easy one because not only did Dean produce a high proportion of the prog rock album covers of the 1970s, there’s actually an entire concept album based on his work. Jon Anderson’s Olias of Sunhillow – whose artwork bizarrely isn’t by Dean – tells the story of an adventurer in a flying ship whose world is disintegrating and has to drag his flying island to find a new home elsewhere, a saga inspired directly by the various covers that Dean produced for Yes. We’ve got the landscape down pat here; in terms of the ecosystem, maybe the Muppeteers can do something with the flying elements and other creatures Dean cooked up for the covers of Osibisa’s early albums, combined perhaps with the marsupial-like entities from the cover of Yes’ Drama. 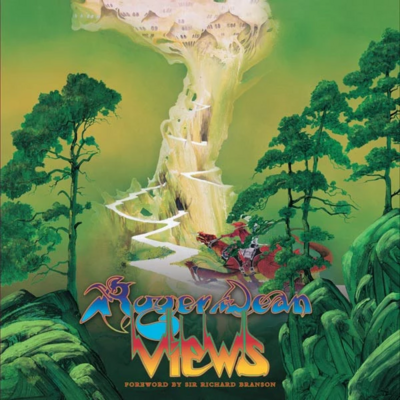 Yes were also enjoying more of a resurgence in the 1980s than anyone else that Dean had been producing album covers for in the 1970s, and it’s tempting to roll the two slots into one and have Yes play Olias’ human crew members and jamming away in the bowels of his ship. (As the last of his species, Olias is surely the Owner of a Lonely Heart.)

However, Dean’s big clients of the 1980s are Asia, so in the Heat of the Moment I’m going to base the Labyrinth slot around them. Jennifer Connelly’s whisked off to a world of lush landscapes and bizarre cities to take part in the search for an honest-to-goodness Dragonball. Other material can still be mined for this; you can hsve a really spooky horseback journey through a blasted wilderness reminiscent of the cover of Yes’ Relayer, for instance. And maybe, I dunno, Jennifer can meet a Badger, or Octopus who’s the pet of a Gentle Giant or something, and the big bad can a conspiracy of Demons and Wizards.

The Pentateuch of the Cosmogony, a collaboration between Woodroffe providing an art book and David Greenslade doing music, was an attempt to do an alien version of the Book of Genesis with a science fictional twist focusing on environmental disaster and interstellar travel. This makes it something of a Silmarillion in search of a Hobbit or Lord of the Rings, which the movie adaptation can be. 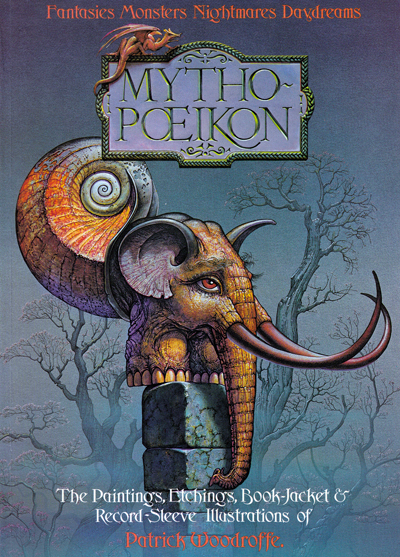 Having done the cover art for Judas Priest’s Sad Wings of Destiny, and with Priest riding high in the 1980s, Woodroffe could probably persuade Rob Halford and the rest of Priest to star in the movie we put in the Labyrinth slot. Rather than dressing them up, let’s let them keep the leather gear and be a group of Mad Max-esque bandits threatening a genteel, sophisticated fantasy society, with weaponry inspired by Woodroffe’s more science fiction-influenced art (they can have an Electric Eye which helps them Breaking the Law), with Jennifer Connelly being the Earth teen who’s destined to stop them.

Matthews has done enough iconic Michael Moorcock work that some sort of muppet-driven Elric adaptation is surely the right course for the Dark Crystal slot. 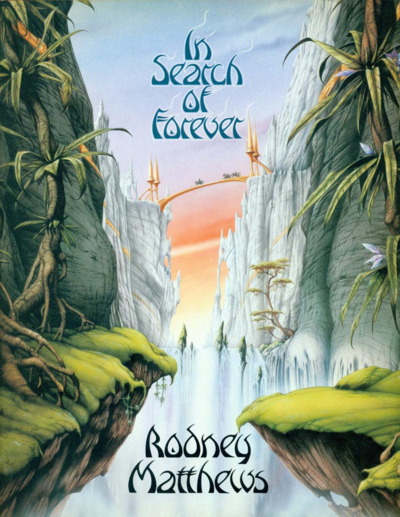 As far as the Labyrinth slot goes, Matthews is so closely associated with Magnum that they should surely play a major role there. Maybe Jennifer gets drafted by elves into a fantasy war and ends up a Soldier of the Line? Or maybe the Labyrinth slot diverges from the rules we set and is a portmanteau fantasy film based around tales told On a Storyteller’s Night?

Jim Henson goes bankrupt as both productions fail, due to the massive cost of the scenery.

Add your own suggestions in the comments!

2 thoughts on “What If Henson Called Some Other Artist?”