Hammer Studios had a great eye for a location, but at the same time were one of those studios who’d never use a set just once if there was the possibility of recycling them and often shot films back-to-back to make that easier. For instance, when their set designer Bernard Robinson made a magnificent replica of a Cornish fishing village on the Hammer backlot, there was no way they were going to use it just for one movie. The end result was two very different Hammer productions, both directed by John Gilling and released in 1966, both tackling colonial themes to varying levels of success, both ranking among their more interesting releases of the mid-1960s.

The Plague of the Zombies 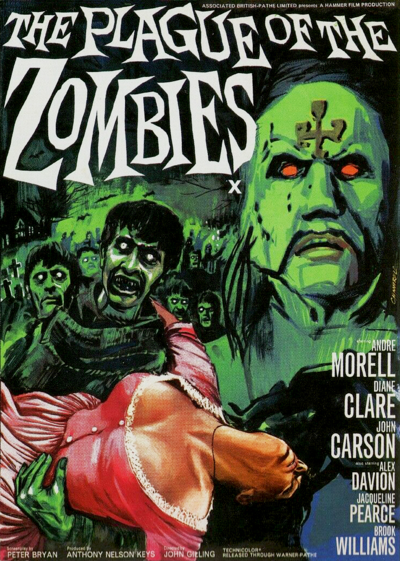 The action of this one kicks off when medical authority Sir James Forbes (André Morell) receives a request for assistance from Dr. Peter Tompson (Brook Williams), a former student of his. After qualifying as a doctor, Peter became the general practitioner for a small Cornish village, and in the course of his work he’s stumbled across peculiar happenings in town and wants Sir James to help investigate.

Sir James is a grumpy old fart who’d rather go fishing, but his daughter Sylvia (Diane Clare) convinces him to go down – partially because Peter married an old school friend of hers, Alice (Jacqueline Pearce, pre-Servalan) and she wants an excuse to visit. Soon the Forbes and Tompson families will face a diabolical combination of idyllic countryside, suspicious locals and voodoo mayhem.

Plague of the Zombies is one of the last really notable zombie movies to have come out before George Romero changed the rules of the game with Night of the Living Dead. It’s easy to forget in these days, but before Romero “zombies” in cinema generally meant “corpses animated by Haitian magic and acting at the command of whoever reanimated them”.

In the hands of Hammer, this could have ended very, very badly, but whilst the movie does start with another classic Hammer “we’re terrified of black people” opening, this time around there’s an additional nuance here. See, it turns out that paying locals wages to work the local mine just doesn’t seem worthwhile to Square Clive Hamilton (John Carson), but being a colonial sort he’s acquired some knowledge and assistants from overseas and is leading the voodoo ceremonies which prompt the dead to rise, since they can dig all day and don’t go on strike.

This concept instantly adds an undertone of class warfare in the proceedings – with the upper classes exploiting the working class and colonised populations alike, appropriating cultural secrets from the latter, debasing them in applying them to crude industry, and viewing the “lower orders” in Britain as little more than a source of extra bodies. The lord of the manor using zombie magic to exploit the working classes even after death is pretty heavy-handed as far as metaphors go – but then again, few metaphors which involve zombies aren’t heavy-handed, and it’s a neat precursor to George Romero’s use of zombies to examine American race relations or consumerism in Night of the Living Dead and Dawn of the Dead.

Overall, the movie does a great job of establishing both a sense of mystery and the impression that the village is a real place with its own subculture, between Alice’s nocturnal visits to the old run-down mine and the excesses of the bullying, fox-hunting aristocrats who act as the Squire’s goons. (That said, the bit where they draw cards to pick who gets the first opportunity to rape her, whilst appropriately enraging, may be a bit much for some.)

As far as the use of zombies in the movie, it’s a real shame that Hammer didn’t go back to this well more often because they come up with some truly unforgettable scenes here. The dream sequence with Peter wandering in the graveyard as zombies erupt out of every grave is downright terrifying, and perhaps a precursor to the zombie hordes of Night of the Living Dead and its imitators, and whilst the last act of the movie is a bit slow, the climax with the burning zombies is fantastically chaotic. 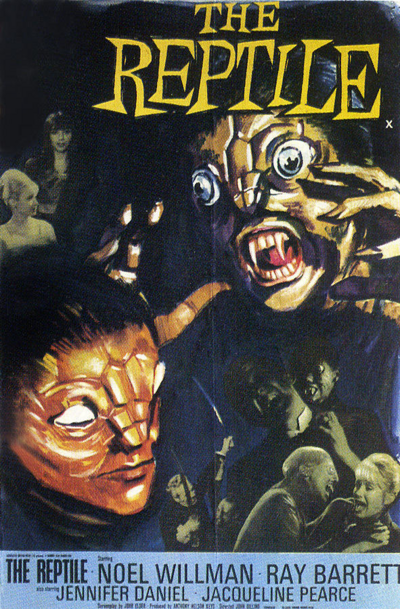 In the village of Clagmoor Heath in Cornwall, a certain Mr. Charles Spalding (David Baron) is taking a bit of a stroll when he decides to have a poke around the local mansion. He’s disturbed in his explorations by the owner, theologian Dr. Franklyn (Noel Willman), but – despite Franklyn’s warnings – is attacked by someone (or something) and bitten. The bite is very obviously poisonous – the poor soul dies foaming at the mouth and his face is stained black by it – and the body is dumped in the village by Franklyn’s manservant, whose foreign appearance I think we are meant to find threatening (Marne Maitland, whose character is simply called “the Malay”).

Charles’ brother, Captain Harry Spalding (Ray Barrett), inherits everything – but there’s nothing of very much value except Charles’ cottage, which Harry and his wife Valerie (Jennifer Daniel) choose to move into. The locals aren’t fond of strangers though – and when the Spaldings arrive at the cottage they find it trashed. Are xenophobic country bumpkins to blame, or was it a reptilian humanoid with a poisonous bite? Franklin and his daughter Anna (Jacqueline Pearce, still frustratingly not Servalan yet) seem to have an idea – as does local drunk Mad Peter (John Laurie) – and the strange music that echoes across the heath at nighttime has more than a little to do with it.

Despite apparently having a similar budget, The Reptile feels much more rushed and slapdash than The Plague of the Zombies, perhaps a consequence of it being knocked together in a hurry to get value for money out of the village sets. The makeup job for the creature is great, but beyond that there’s extensive use of very obvious stock footage, along with some corners cut in the sound effects; the thunder cracking during the opening credits is clearly looped, for instance (I think it’s the thundercrack used at the very start of the opening sequence to The Prisoner).

The script was also banged out in a rush by Anthony Hinds, though it does have some good ideas; I like the plot point about the locals misidentifying the symptoms of the Reptile’s bite as being the Black Death, explaining why they have taken to shunning outsiders and not going to the funerals of the afflicted persons. In other respects it has dated poorly. It turns out that Dr. Franklyn and Anna spent some time in Burma doing missionary work, and so that Franklyn could study what he calls “the primitive religions of the East”. It transpires, of course, that all the terrible happenings stem back to Franklyn direly offending the local tribe of werereptiles in Burma, who forcibly inducted Anna into their ranks as a dire punishment.

Although this aspect of the story could be read as a cautionary tale against disrespecting other cultures, the implications are still deeply unfortunate – firstly, the idea that other cultures hide super-secret dire occult horrors, and secondly the implication that the really bad thing was Anna bringing back nasty oriental influences with her, an implication only strengthened by her habit of padding about the house in the most Indian-looking costume Hammer’s costume department could cook up and playing the sitar. Whilst the part where Dr. Franklyn snatches the sitar out of Anna’s hands and smashes it Pete Townshend-style is hilarious, it’s also meant to indicate that the sitar music is associated in Franklyn’s mind with dire horrors – and to suggest that connection to the audience too.

And that’s before we get to all the dodginess associated with “the Malay”, who spends his time exerting a sinister influence over the Franklyns, silently stalking people over the heath, and making Anna get down on her knees and beg him for permission to play with the house cat.

Ultimately, the anti-colonial interpretation of the story is as weak as the anti-colonial interpretation of, say, Rudyard Kipling’s work – its criticisms of colonialism fail because they’re based in the assumptions of colonialism. The big difference is that Kipling lived in a colony and was surrounded by colonists when he wrote many of his Indian tales, whereas The Reptile was filmed in Cornwall with the dirt still fresh on colonialism’s grave. Kipling we can criticise for not seeing through the prejudices of his time, though that sort of thing is easier said than done; the makers of The Reptile were working at a time when the failures of colonialism should have been obvious to all.

Perhaps the most damning aspect here is that The Plague of the Zombies had such an overlap of cast and crew with The Reptile, and did so much better on this front. Yes, that also was based on an occult secret hidden by another culture, and cultural influences brought back by a British traveller, but there a) the horror was unambiguously inflicted on the town by the Squire, not by some random foreigners the Squire had offended, and b) the Squire does all that grim shit not because he’d been corrupted by wicked foreign ways, but because he was already corrupt and just wanted a cheap supply of slave labour.

There’s no two ways about it: The Plague of the Zombies, though inevitably the passage of time has meant some of its aspects have dated poorly, still offers a fairly solid criticism of colonialism, with the ruling classes exploiting foreigners and the working classes alike for their sole benefit, whereas The Reptile talks a fine talk along those lines but doesn’t walk the walk.

2 thoughts on “Hammer Holidays In Cornwall”