Emilio Miraglia’s career as a director was a brief one, spanning only from 1967 to 1972. I can find few biographical details on him, but some sources suggest that he died in 1982, so perhaps ill health is to blame for his career being curtailed. Though most of his movies were spy or crime thrillers and he also did a Spaghetti Western (Joe Dakota), he’s mostly known for a pair of early 1970s pieces he did as part of the giallo boom.

Arrow Video’s Killer Dames is a boxed set gathering these two together. In general, I don’t consider either of them keepers, but they’re interesting enough to be worth watching once. Let’s take a look and see what we can get out of them…

The Night Evelyn Came Out of The Grave

Lord Alan Cunningham (Anthony Steffen) is a well-heeled aristocrat with a hip pad in London and a sprawling manor house out int he country. He formerly shared the house with his wife, Evelyn (Paola Natale), but she is dead; her absence weighs on him, as does a certain overpowering guilt. The exact story of what happened to Evelyn is, of course, one of the climactic reveals of the film, but it’s apparent early on that there’s reason to be suspicious. Perhaps it’s the way Alan’s occasional flashbacks of Evelyn are so overpowering they can absolutely knock him out, or maybe it’s his habit of luring sex workers with red hair similar to Evelyn’s to his manor, getting them to wear a distinctive pair of shiny black thigh-high boots, and then flogging them well beyond the point they’d previously consented to and disposing of their bodies and personal effects once the fun is done.

Then again, everyone has their own way of dealing with bereavement, right? After we see him going through his serial killer process a couple of times, Alan meets someone new, the very charming Gladys (Marina Malfatti), who he marries. It seems like Alan has put his grief over Evelyn and his serial murder habit behind him… except not quite. For one thing, there’s Albert (Roberto Maldera), Evelyn’s brother who works as the groundskeeper on the estate and who knows enough to blackmail Alan over his murder hobby. For another, Alan can’t quite bring himself to exile the portrait of Evelyn he keeps in his bedroom to storage, or at least hanging it somewhere it won’t watch him and Gladys while they sleep, whilst he imposes an absolute ban on women with red hair being brought into the house.

And there’s the matter of Susan (Erika Blank), Alan’s most recent victim. Alan had one of his powerful flashbacks in the midst of attacking her in the ruined church in which the Cunningham family line are interred, and seemed to lose consciousness before finishing the job, but she seems well and truly gone by the time he comes around… and yet her golden locket, which Alan makes sure to dispose of down a drain, turns up again on a table indoors. Has Evelyn, roused by a seance conducted early on in the movie, really come out of the grave to take revenge?

The Night Evelyn Came Out of the Grave is an interesting mashup of a giallo approach – an essentially non-supernatural horror tale full of psychological twists and turns, betrayals, playing with identity, plot twists and so on – with more classic gothic stylings. It feels like Hammer Studios made a big mistake by not taking note of this; they spent much of the earlier 1970s trying to find a way to update their style to include more modern settings and stories, whilst being reluctant to let go of their traditional style, and this really shows a way that Hammer could have had their cake and eaten it.

Miraglia establishes a fairly extended cast of characters, based around Alan’s friends and employees, and their intertwined relations and competing goals means that there’s plenty of scope for interesting suspects and plot twists which Miraglia makes good use of. The script by Massimo Felisatti, Fabio Pittorru, and Miraglia manages to incorporate this complexity without allowing things to become too overcomplicated for most of the running time, and by and large the casting is pretty good, with some exceptions. What’s up with “Aunt” Agatha (Joan C. Davis) looking substantially younger than Alan himself? Alan’s granddad must have been siring children over an amazingly wide span of years.

As you might expect, it’s basically a gaslighting narrative with some ostentatiously ghoulish tricks played on Alan by the perpetrator. The ending, however, overplays its hand, with more or less everyone being guilty in some respect of plotting against everyone else, and the resolution of all these intertangled conspiracies feels rushed and unsatisfying. Also, the fact that Alan is a honest to goodness serial killer doesn’t ever seem to become as significant a plot element as the first half hour or so of the movie makes you think it will be, which is really bizarre. 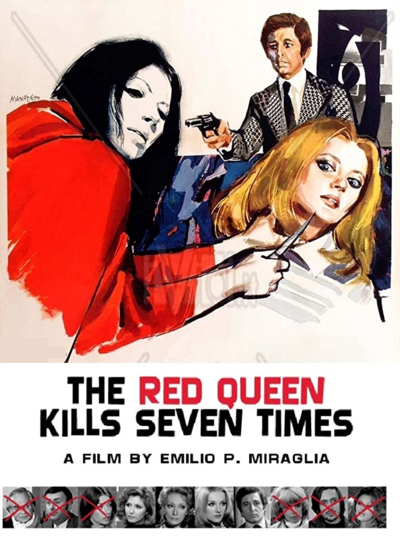 In an old mansion in Germany Tobias Wildenbrück (Rudolf Schündler), patriarch of the Wildenbrück family, dies of a heart attack brought about by a sudden shock. His granddaughters and their spouses stand to inherit quite the fortune, but there’s a few snags. For instance, one of the granddaughters is dead; Evelyn (played by an uncredited and apparently unknown actress) ended up dying just over a year ago whilst in a fight with Kitty (Barbara Bouchet), whom Evelyn had spent most of her life tormenting to one degree or another, and Kitty and Franziska (Marina Malfatti) covered up the death and told everyone that Evelyn had moved to America. Still, at least one person – the sleazy blackmailer Peter (Fabrizio Moresco) – suspects the truth, and intends to use it for his own profit.

On top of that, there is the family legend, related by Tobias once upon a time to Evelyn and Kitty when they were little. Supposedly, the Red Queen had been murdered by the Black Queen in the house back in olden times, as a result of the Red Queen’s tormenting of the Black. Around a year later the Red Queen returned from the grave and went on a killing spree, killing seven people and saving the Black Queen for last. The story goes that every hundred years, the killings begin again – and that happens to be due this year. All nonsense? But what can anyone make of how Tobias seemed to die of fear – or that Herbert (Nino Korda), Francesca’s husband, believes he saw the Red Queen prowling the house the night of Tobias’ death? Or, indeed, the fact that he claims the Red Queen resembled none other than Evelyn?

As you might gather, this recycles a lot of plot elements of The Night Evelyn Came Out of Her Grave – the death of someone called Evelyn in the backstory, the way the killer might either be Evelyn’s ghost or someone pretending to be her ghost, the blackmail angle, the involvement of an inheritance including a lovely old manor house in the plot, and so on.

The major difference lies in Miraglia recalibrating his influences – whereas The Night Evelyn Came Out of Her Grave was a sort of giallo-gothic hybrid, this one only works in a few gothic aspects for extra spice and otherwise leans much more heavily on the giallo side of the equation. There’s at least one death which is outright Argento-worthy in terms of both gore and the way it really gets under your skin, like how the deaths in Deep Red were optimised to be reminiscent of accidents familiar to viewers to maximise the audience’s discomfort.

The addition of the designer fashion house which Kitty works at as a photographer (where she is dating one of the bosses) helps provide something extra to the table; giallo had been fascinated with the fashion world ever since Mario Bava’s genre-defining Blood and Black Lace, of course, but here the plot element proves effective as a route for adding some character motivations which don’t, at least by initial appearances, revolve around Evelyn’s fate or the inheritance.

Both movies have very sexualised aspects – that’s giallo for you – but here the sexual aspects have a sleazier air than the glamourised celebration of swinging London offered up in The Night Evelyn Came Out of Her Grave; characters trawl parks to find prostitutes for threesomes, and police detectives pass disapproving commentary on the love lives of the characters. (The lead detective, by the way, is played by Marino Masé of Contamination fame, looking amazingly like Freddie Mercury.)

Interestingly, whilst previous movie rules out the role of the supernatural altogether by the time it resolves, this time around there are hints that there may be a supernatural hand in this – Evelyn seems to have had episodes which could be interpreted either as incidents of uncontrolled violence arising for psychological reasons or could be possession by the spirit of the Red Queen.

Some aspects of the movie are ahead of their time; the pale mask worn by killer very reminiscent of Michael Myers’ getup in Halloween. Others have dated poorly and represent some of the worst habits of the giallo genre of the time; there’s a rather abrupt and grim rape scene that I am not convinced really adds a whole lot to the plot beyond gratuitous nudity. (There’s already plenty of reason for the characters concerned to dislike the blackmailer because, well, he’s a blackmailer; we don’t need him to rape someone to get the idea that he’s a dirtbag.)

As with The Night Evelyn Came Out of the Grave, the ending suffers from just being a bit too overstuffed and incoherent – it fails to maintain tension or keep hold of my attention, and some bits just plain don’t make sense. For instance, supposedly Evelyn was the daughter of a poor peasant couple that Tobias adopted so as to confound the family curse, but it isn’t remotely adequately explained why he would think that would work because the way the curse was explained it was attached to the house, not the family.

In addition, the climax involves Kitty being trapped in an old chamber that’s flooded, the floodwaters heralded by hordes of rats rushing in to escape the water that has flooded their nest sites. That’s properly disturbing, but seems a little cruel to the rats in its implementation, some of them are clearly very soaked and very unhappy. In addition, when the door to the chamber is opened and Herbert gets swept away by the blast of water, this ends up looking more comical than tragic.

There’s also a major flaw in the construction of the story: since you know that only a very limited set of people know about what happened between Evelyn and Kitty, and since it can be inferred that the killer is disguising themselves as Evelyn with the specific intention of terrorising Kitty, the available options for suspects ends up quite limited and the reveal of the ultimate puppet-master isn’t much of a surprise.

This was Miraglia’s final giallo, and alongside Joe Dakota was his final movie. I feel like Miraglia had a really good giallo in him which we only see glimpses of in this and The Night Evelyn Came Out of the Grave, and it’s a real shame his career ended before he could produce the definitive version of that vision. Or perhaps he never would have – after all, Red Queen was already a second attempt to do better with similar material to its predecessor and it’s not a great improvement on it.

One thought on “Arrow’s Lineup of Killer Dames”