Parallel universes are real, but amidst the myriad of alternate Earths which exist, only one has succeeded in combining a high level of technological accomplishment combined with a peaceful, benevolent social structure. This particular world, on discovering the existence of parallel timelines, designated itself as Zero-Zero on the multiversal co-ordinate system and, with the aid of the super-computer WOTAN and the agents of the Valhalla Project, has commenced a process of monitoring and studying the alternate worlds.

Swiftly, it became apparent that not all was well. The Valhalla Project soon recognised the existence of another multiversal power out there – one which seemed to have preceded Valhalla on the scene, and which from its as-yet-unidentified home timeline had interfered in the development of innumerable other universes. In fact, Zero-Zero’s near-Utopian idyll was only possible because so far they had been spared from this force’s influence. 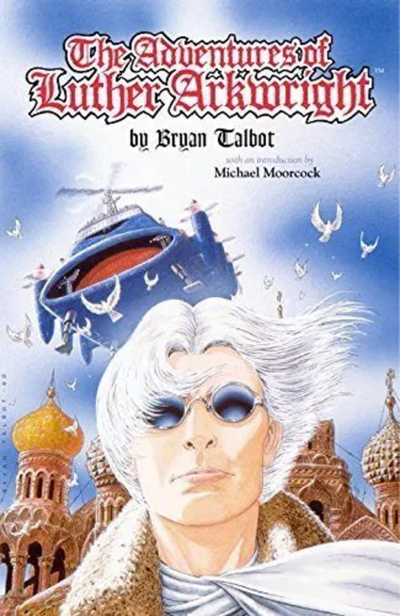 For want of a better term, Valhalla duly designated this force as “the Disruptors”, and began action to counter their influence. A range of individuals with unique psionic talents are capable of aiding Valhalla; for instance, the remarkable Rose Wilde has an intense rapport with her alternate selves in other universes, so the Zero-Zero version of Rose has effectively recruited the others as an extended transdimensional intelligence network. Even more amazing are the capabilities of the one and only Luther Arkwright – a unique individual among the parallels, Arkwright was born with the ability to psionically project himself from timeline to timeline without outside assistance. Kidnapped at birth by the Disruptors, Arkwright’s success in escaping them and staying one step ahead of them allowed for his recruitment by Valhalla.

Now, however, matters are coming to a head. The mysterious Firefrost artifact has been obtained and activated by the Disruptors, prompting an increase of chaos across all timelines; eventually, the entire multiverse will unravel if they are not stopped. In response, Valhalla activates their backup plan: Ragnarok. Arkwright is sent to a strategically important timeline – one in which the English Civil War has been left unresolved for over 300 years thanks to the influence of the Disruptors, resulting in an England where a fascistic Puritan regime is ruled over by the Cromwell dynasty whilst Royalists are a despised minority. Arkwright’s job is to assist the Royalists – not because their cause is all that much better than the Puritans’, but because doing so will hopefully prompt a reaction from the Disruptors, allowing Arkwright and WOTAN to track down their home timeline and put a stop to them for good…

Bryan Talbot’s The Adventures of Luther Arkwright began in 1978 in the pages of the short-lived Near Myths, a short-lived attempt at a more adult sort of British SF comic which was also the home to some early work by Grant Morrison. Morrison’s own later The Invisibles and The Filth would later take a certain amount of inspiration from Luther Arkwright with their mashup of high technology, occultism ranging from earthy hedge magic to erudite mysticism as a lens for interpreting psionic capabilities and metaphysical truths, sexy espionage shenanigans, and counter-cultural fashionability.

That makes sense, because Morrison and Talbot themselves seemed to be drawing on similar inspirations of their own. Like France’s Metal Hurlant, Near Myths was strongly influenced by New Wave science fiction and fantasy of the 1960s and 1970s – it seems to have been in part an attempt to do a slightly more grown-up and serious take on 2000 AD, or a comics equivalent of New Worlds as it was when J.G. Ballard and Michael Moorcock were that magazine’s star players.

Luther Arkwright unabashedly borrows from the New Wave in a number of respects. For instance, the basic concept of a mass of different parallel universes in which two different multiversal forces – one tending towards entropy and destruction, one opposing that – is a significant feature of Roger Zelazny’s Amber series. However, that Law/Chaos tension is even more prominent in the work of Michael Moorcock, and The Adventures of Luther Arkwright is pretty unabashedly a tribute to Moorcock’s work in comic form as much as it is Talbot’s own original vision.

In particular, the figure of Arkwright himself is generally acknowledged to owe an awful lot to Jerry Cornelius. You have the cool sci-fi pistols Arkwright uses, you have his hopping between timelines, you have his sex, drugs, and rock and roll lifestyle spicing things up, you have the use of his powers taxing his mental health in a way that Jerry often seems to suffer in his stories, you have recurring characters like Rose Wilde who show up in different roles in different universes, you have the protagonist struggling with the role of violence in his life, the connections are pretty evident.

That said, the series does not exclusively drink from that one well. Aesthetically, the tendency for the comic’s various parallel universe to have variations on a rather steampunk aesthetic suggests the influence of the Oswald Bastable novels. More generally, the way Talbot uses the Puritan/Royalist conflict as a lens to examine the myths Britain tells about itself and its history is reminiscent of Moorcock’s own criticism of British exceptionalism. (It also has its parallels with another British graphic novel that was slowly making its way out over the course of the 1980s – namely, Alan Moore’s V For Vendetta – when it comes to the depiction of a disturbingly plausible Britain of fascistic intolerance.)

Perhaps this respect for Moorcock’s underlying themes explains why Moorcock has been much kinder about Luther Arkwright than he has been about Grant Morrison’s Gideon Stargrave character – who first appeared in the pages of Near Myths before being resurrected as an alter ego of King Mob in The Invisibles, and prompted a certain level of annoyance from Moorcock over the matter when he felt that Morrison hadn’t sufficiently acknowledged his borrowings from Moorcock to the extent that Talbot had. In fact, the Dark Horse collection of the entire story includes an introduction by Moorcock.

After the collapse of Near Myths in 1980 and a brief attempt to get the story going again elsewhere, The Adventures of Luther Arkwright had a hiatus from 1982-1987, at which point Valkyrie Press stepped up to the plate and enabled Talbot to bring out the finished story in 9 volumes. There’s a slight discontinuity about halfway through the story as a result of this, but it’s used to good effect; the earlier sections are a more wild and woolly ride, with different plot threads from different stages of Arkwright’s career shuffled in together. From the halfway point onwards or thereabouts, the structure simplifies: matters on the Puritan timeline are the primary focus and the story progresses in a fairly linear manner. The overall effect is of the narrative beginning with a mass of parallel stories before it becomes more rooted in the parallel world immediately of concern, which works quite well.

Another shift over the course of the comic is in Luther’s power level. He begins as a psychic secret agent, eventually is acting as an outright superhuman, and is eventually the Messianic saviour of the multiverse. There’s a certain amount of whiz-bang wish fulfillment here, and whilst that isn’t necessarily a bad thing, I do have reservations about it. Sure, he’s all cool and counter-culture, but if we want to get away from Britain’s negative impact on the world and, more generally, a world of violent conflict and greed, is yet another white cishet saviour figure what we need? (Unlike Jerry Cornelius, Arkwright is much more heteronormative in his behaviour.)

I have some other reservations. The comic is often rather male gazey in that way comics often are; the women of major plot significance are universally conventionally hot and presented in a highly sexualised manner, the men enjoy a much greater range of presentations. Some of the mysticism involved can become tiresome, especially since it’s steeped in that sort of 1970s counter-culture type of occultism where the cultural appropriation dial is cranked up to 11 more or less constantly, though at least in this instance some of this is specifically explained as being a result of Arkwright’s cultural expectations imposing themselves on what he encounters.

On the whole, however, The Adventures of Luther Arkwright kind of does the whole Grant Morrison Invisibles thing better than The Invisibles did, and much less longwindedly at that.