Deliberately using an androgynous name (or her pen name of “Andrew North” when that wasn’t masculine-presenting enough) in order to get her work in front of audiences she felt might have turned their noses up at reading women’s work, she would produce a staggering amount of material over the course of her career, even setting aside the numerous collaborations she undertook with other authors later in life, and much of her work was pitched towards what we’d now recognise as a YA audience – at the more mature end of what science fiction called the “juveniles”, or the lighter end of adult-oriented work.

Her most expansive series was the Witch World sequence, a series of dozens of novels set in a fantasy world; commencing in 1963, the books deliberately put gender roles and power structures under a spotlight, and whilst some aspects of the series now seems unrefined, that may well be because she was coming in at an earlier stage of the conversation to us, and at a time when some of the pitfalls of addressing this sort of thing in an fantasy or SF context hadn’t been so evident. For this review I’ll take a look at the first two novels in the series, which largely set the stage for the rest. 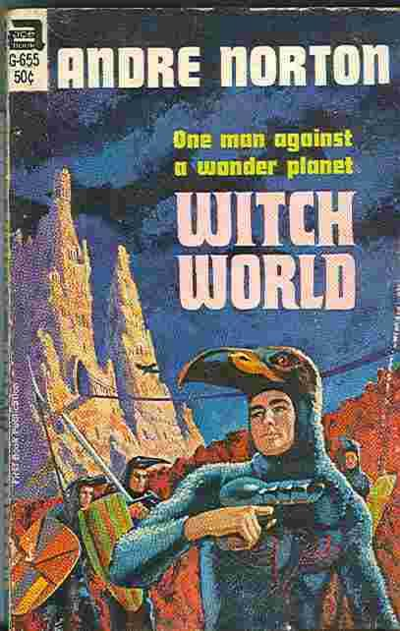 One of the advantages of having written SF and fantasy since the 1930s is that you can use the old, now-cliched openings without a second thought, since you helped shape them in the first place. Witch World commences with the old fantasy trope of a man from our world being plunged into a fantasy world through some mystic wibbly encounter. In this particular instance, our traveller is Simon Tregarth, and the mode of travel is the Siege Perilous, an ancient sacred stone which instantly transports those who sit upon it by the early light of dawn to the universe that most needs them, or which they are in most need of. (The implication is that in the Arthurian myths Percival and Galahad can survive sitting on the thing because they were already in the ideal time and place for them to exist.)