The third Black Wings volume by and large maintains the standard of the second one. By this point, Joshi has managed to establish a stable of writers who can reliably contribute something interesting whilst leaving open enough slots for new contributors to shake things up. That said, whilst I found the hit and miss ratio more or less the same this time around, I found some of the misses much more enraging than those in the previous volume. 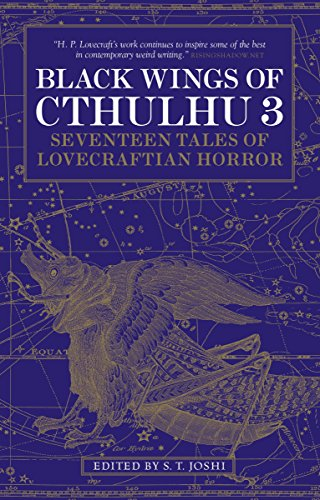 For this release Joshi bookends the collection with stories riffing on From Beyond. Houdini Fish by Jonathan Thomas is a decidedly modern sequel to From Beyond in which the unearthing of Tillinghast’s device makes the world go weird – and more disturbingly, makes people accept that as normal. It’s a strong starting story let down by an annoying writing tic of Thomas in which he keeps leaving out “the” and “a” in sentences. I don’t think this is an attempt to emulate dialect, particularly since he really isn’t consistent about it, and it just hurts the flow of the story.

END_OF_DOCUMENT_TOKEN_TO_BE_REPLACED 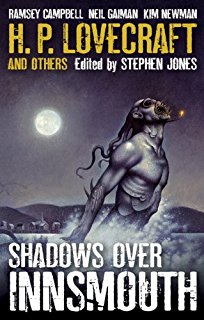 END_OF_DOCUMENT_TOKEN_TO_BE_REPLACED

Black Library authors working in the Warhammer fantasy setting are, it’s fair to say, working under far tighter constraints than those working in the Warhammer 40,000 universe. It’s true that in both cases there are things which the authors in question cannot do – the Emperor mustn’t be killed, the Empire must not collapse, Chaos cannot get the ultimate win (well, not unless the story in question is explicitly set in the future of the relevant setting as an account of the End of Days). But there are advantages to having an entire galaxy to play in rather than one planet, especially when you consider that most Warhammer novels are only set in one particular area of said planet (the local Holy Roman Empire equivalent).

The major advantage is that you can just crank everything up to eleven and blow up the world when you’re writing for Warhammer 40,000. Sure, you can’t blow up Holy Terra, that’d be naughty, but except under very particular circumstances (probably involving the Horus Heresy series) you’re almost never going to be setting your 40K novel on Earth, or indeed on a world which plays a major part in the canon. If you’re at all sensible, you’re taking advantage of the extremely large canvas the Imperium provides you with and setting your story in a corner of space you’ve made up yourself. Not only does this give you an opportunity to go to town with your worldbuilding whilst still retaining sufficient connections to the wider Imperium to keep the place feeling like part of the 40K universe, it also means you can blow up a planet or two without treading on someone’s toes. In the more cramped surroundings of the Warhammer universe, however, you really have to work to make sure your story doesn’t really have any big long-term ramifications outside of the immediate area it unfolds in – and if you’re in a major city of the Empire, maybe even that’s too much.

END_OF_DOCUMENT_TOKEN_TO_BE_REPLACED

Although he wrote four novels for the Warhammer fantasy setting (one of which, The Wine of Dreams, I previously reviewed here), Brian Stapleford – using his pseudonym of Brian Craig – only wrote one Warhammer 40,000 novel, Pawns of Chaos. This is rather a shame, because it’s easily the most deep and thoughtful Black Library book I’ve ever read. In his Warhammer novels Craig had proved himself an adept and subtle writer with a flair for writing about Chaos, the great threat to both the Warhammer and Warhammer 40,000 settings; this was presumaby why he was entrusted with writing a novel which mostly unfolds from the point of view of Chaos worshippers. But, to an even greater extent than in The Wine of Dreams, Craig waxes philosophical more than the average Black Library author, and uses the theme of Chaos as a springboard for an existentialist exploration of how man is supposed to face the vastness of eternity and the ultimate insignificance of human endeavour on a cosmic scale and the inevitabilty of death… stop sniggering, it’s true! 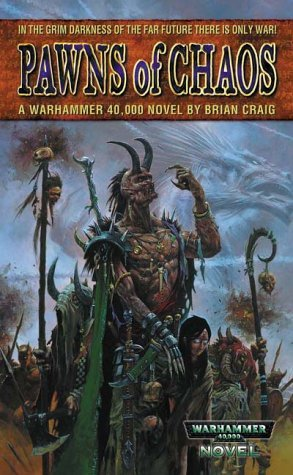 The action of the novel unfolds on the world of Sigmatus, a backwater planet whose proximity to the Eye of Terror – a vast cosmic storm – renders warpspace travel difficult if not impossible in the vicinity. Seven generations ago the warpstorms eased, and in that window of opportunity the Imperium of mankind invaded. The locals, who mainly live in small rural villages and live a non-technological lifestyle were by and large unable to withstand the terrifying firepower of the Imperium – however, before the Imperium could conquer the planet outright, the warpstorm flared up again, stranding them there and rendering them incapable of communicating with their forces elsewhere.

END_OF_DOCUMENT_TOKEN_TO_BE_REPLACED

Brian Stableford, under his pseudonym, was one of the contributors to the earlier line of Warhammer tie-in fiction – the one administered at first by Games Workshop Books and then by Boxtree before that particular arrangement fell apart. His Orfeo trilogy was later reprinted by the Black Library – but that’s nothing special, since they’re reprinted more-or-less the whole original Warhammer Fantasy fiction line. What’s more special is that the Black Library invited him back to write a few more stories for them, a courtesy they didn’t extend to all the early Warhammer authors. (David Ferring, author of Konrad, has never been seen since, thank goodness.) 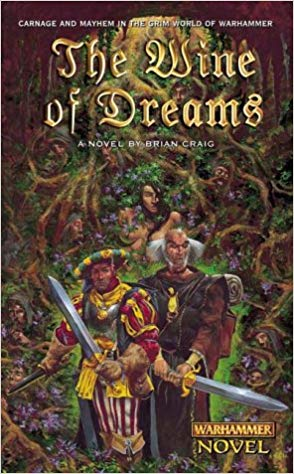 The Wine of Dreams is Stableford/Craig’s contribution to the new Black Library line of Warhammer novels, and it’s excellent. Hyping up the air of paranoia, mystery, and conspiracy that surrounds the secrets of the Warhammer world, Craig nearly inverts the cliches of the fantasy coming of age story to tell the tale of an innocent tempted by the wiles of Chaos. The innocent in question is Reinmar, scion of the Wieland line dynasty of wine merchants. Reinmar, like all fantasy protagonists who commence their story in their late teens working a dull and mundane job in a sleepy rural town, is bored of his drab everyday life, and yearns for adventure and excitement. This wanderlust would, in any other fantasy novel, lead to a wonderful jaunt to save the land from dire peril, in which the restless youth comes of age, defeats the dark lord, and gets the girl. In the Warhammer world, however, the desire for new experiences makes you bait for the Chaos Gods…