Sure, Clark Ashton Smith’s stories are readily available online, it’s still nice to have hard copies of his works. When I originally read them it was in the Panther reprints of his Arkham House collections, which retain some tampering and revisions and censoring by various hands. When William Burns tipped me off on my previous article that Night Shade Books’ Collected Fantasies of Clark Ashton Smith series had presented the definitive versions of his short stories, restored as closely as possible to his intended texts by Scott Connors and Ron Hilger, I decided to retire my Panther paperbacks – which by now are a bit tatty – and pick up the new line to reintroduce myself to Smith in a whole new way. 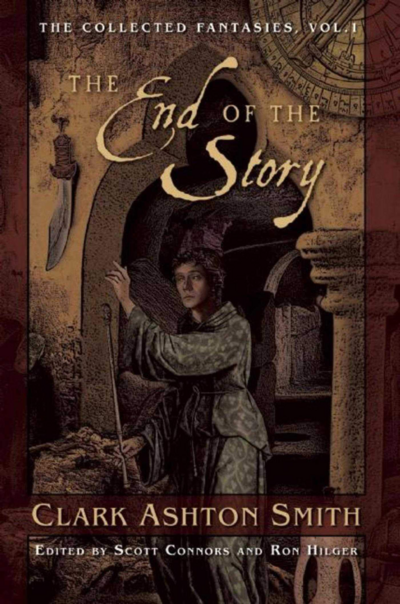 Connors and Hilger arrange the anthologies in as close to chronological order of composition of the stories as they can attain. This is a bit of a break from previous attempts to anthologise Smith, which have tended to collect the stories from his various fictional settings like Hyperborea and Zothique into little clumps, but it does mean that we get to see Smith’s writing evolve over the span of time presented.

It’s not exactly amateurish to begin with, mind. Connors and Hilger don’t include Smith’s juvenilia in the main run of the series – what was available at the time was collected in Miscellaneous Writings, a companion volume, and other early prose fiction from Smith has been rediscovered and reprinted by Hippocampus Press. Instead, volume one – The End of the Story, picks things up in 1925, when Smith – encouraged by his pen pal H.P. “Creepy Howie” Lovecraft – decided to try his hand at it.

END_OF_DOCUMENT_TOKEN_TO_BE_REPLACED

Despite the fact that even during Lovecraft’s own lifetime the Cthulhu Mythos was well-established as a multi-author shared world type of affair, and despite the fact that the various contributions to it tended to be in the short story format, it took a surprisingly long time for a fully Mythos-themed short story anthology to appear. In the first few decades of Mythos fandom, when August Derleth exerted a lot of influence over the field and Arkham House as close to being the de facto “official” publisher of such material as anyone could claim to be, Arkham didn’t really put out any all-Mythos multi-author anthologies, unless you count books put out under H.P. Lovecraft’s byline that included falsified collaborations by August Derleth or essays by Lovecraft Circle members. Instead, Mythos stories were sprinkled among other material in Arkham House’s genre anthologies.

That changed in 1969 with Tales of the Cthulhu Mythos; this inspired a trickle of other all-Mythos multi-author anthologies, like the Lin Carter-edited Ballantine Adult Fantasy series entry The Spawn of Cthulhu from 1971 (an anthology now largely redundant due to the material mostly being reprinted in other, more easily-available sources), or the DAW Books release The Disciples of Cthulhu from 1976, to Arkham House’s own New Tales of the Cthulhu Mythos from 1980. In the 1990s, the pace of such publications picked up, in part because of figures from fandom like Robert M. Price gaining prominence as anthologists and in part because of Chaosium starting up their own fiction line as a tie-in with the Call of Cthulhu RPG.

The anthologies I am going to review in this article series will cover Tales of the Cthulhu Mythos and subsequent Arkham House releases that can be seen as sequels to it, as well as two series of anthologies that can be seen as attempts by prominent Lovecraft critics to craft their own take on Tales – one anthology grouping is by Robert M. Price, whilst the other is by S.T. Joshi.

END_OF_DOCUMENT_TOKEN_TO_BE_REPLACED

“You shall know Tsathoggua by his great girth and his batlike furriness and the look of a sleepy black toad which he has eternally. He will rise not from his place, even in the ravening of hunger, but will wait in divine slothfulness for the sacrifice.”

Bison Books – an imprint of the University of Nebraska Press – have as part of their Frontiers of Imagination series reprinted Lost Worlds and Out of Space and Time, two classic collections of Clark Ashton Smith short stories, in nice paperback editions with new introductions by Jeff VanderMeer. This is important, and a reason to celebrate: Smith is in many respects the “missing member” of the Weird Tales triumvirate of the 1930s. Conan the Barbarian is a uniquely iconic and controversial figure, enough so to ensure that Robert E. Howard’s work has remained well-known, if not necessarily well-loved. Lovecraft’s name has been invoked by just about every important horror writer for the last seventy years, and Cthulhu has become a beloved (if somewhat played-out) geek icon. Smith’s work, meanwhile, has remained frustratingly obscure, often languishing out-of-print, despite the fundamental importance of his work to fantasy and science fiction. The stories of CAS were major influences on Jack Vance, especially with regards to Vance’s first Dying Earth stories. The Dying Earth, meanwhile, deeply impressed Gene Wolfe, and inspired The Book of the New Sun. And Smith, Vance and Wolfe, between the three of them, have influenced just about every SF/fantasy author you could care to name. 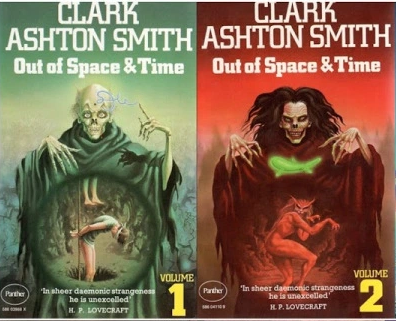 If Smith’s work has been neglected, though, it has at least remainedrelatively unspoiled. Lovecraft’s reputation was damaged for decades by third-rate pastiches written by August Derleth and published under Lovecraft’s name in order to promote HPL’s work (as well as Derleth’s personal theories about the Cthulhu Mythos, which aren’t even slightly supported by Lovecraft’s own writings). Howard’s Conan stories were heavily revised and, in some cases, rewritten by L. Sprague de Camp and Lin Carter, the unaltered texts remaining out-of-print for years, and there was even a point where Conan stories by other authors were flooding the market while Howard’s writings were out-of-print. Smith avoided this fate through the simple expedient of not dying: unlike Lovecraft and Howard, he lived to see the first mass market anthologies of his work published. Smith was the third author – after Lovecraft and August Derleth – to be published by Derleth’s Arkham House publishing firm, and in a series of six volumes (Out of Space and Time, Lost Worlds, Genius Loci, The Abominations of Yondo, Tales of Science and Sorcery and Other Dimensions) they would publish a complete collection of his SF, horror and fantasy short stories. As the first two volumes of this set, then, the two Bison Press volumes are both ideal introductions to his work and important summaries of it.