Dan and Kyra and I had some time to kill before we went to see Prometheus the other week, and since it was in the vicinity of my birthday I had a £60 Waterstones voucher to spend, so we poked around their SF/fantasy section and I picked out stuff whilst Dan and Kyra made suggestions. As it panned out, the spend was split between stuff I would almost have certainly bought anyway (Warhams stuff) and taking a chance with authors I’m not familiar with, the most expensive item being Daniel Polansky’s The Straight Razor Cure, which was drawn to my attention mainly through Dan and Kyra being shocked by how shitty it looked. Cheap, lazy cover featuring a wizardy person with their face concealed? Check. Blurb about how it’s a dark and edgy story about grimdark happenings in a fantasy city? Check. Optimistic attempt to pitch this as the first volume in a series? Check. The odds of this book just plain failing were good. So of course I bought it and tried to read it because I like shouting at lousy books for your entertainment. 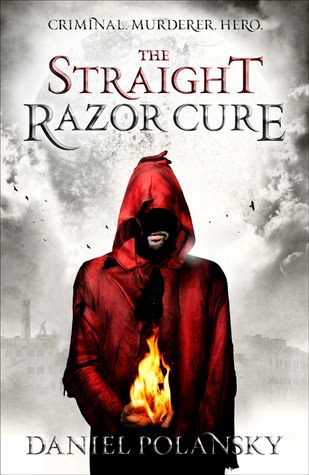 Our story revolves around Warden, a war veteran and former Agent of the Crown (a sort of detective/spy/hitman by royal appointment) who got thrown out of the job due to some misdeed which is hinted at early on and which I guess is unveiled over the course of the novel. To make ends meet, Warden has become a drug dealer, and has more or less single-handedly taken control of an area of Low Town, where the poor people live, as his personal criminal fief. Of course, he’s breaking the rules according to Scarface by getting high off his own supply – his addiction to “pixie’s breath”, which sounds more like it ought to be some sort of equivalent to magic mushrooms or weed or acid as opposed to the potent stimulant it appears to be, means he can exert the incredible levels of violence necessary to put competitors in their place without feeling the injuries they inflict on him until the fight is over.