In case you hadn’t noticed, people are paying a lot of attention to children’s fantasy today, and to some extent we can thank the Harry Potter series for that. It’s often said that the Potter novels are just as enjoyable for adults as they are for children, and the publishers have picked up on this, producing versions with nice, grown-up covers which adults wouldn’t be embarrassed to be seen with on the bus.

On the other hand, there’s a lot to be said for leaving children’s things to children – not because there’s necessarily anything wrong with grown-ups enjoying stories written for children, but because there’s always a risk that the adults will snatch the kid’s toys away from them. I once stumbled across an epic rant online (the URL to which I have since lost) in which a grown adult bitterly complained about losing a Harry Potter costume competition organised by a local bookshop to someone’s child: not only did the author feel that the judges were biased towards children, but they expressed a deeply personal animosity towards the child in question, feeling that the kid had stolen the prize which was rightfully the petulant adult’s – even though the girl who won is much closer to the supposed target demographic for Harry Potter than the angry ranter was.

It’s not just the publishers putting out dark moody covers for the novels, or random kooks flying off the handle at children, though. An army of writers exists online, devoted solely to the purpose of churning out adult fanfic. (There’s also kid-friendly fanfic, of course, but let’s face it – there is a terrifying amount of Potter porn out there.) What is this, if not an attempt to say “Harry’s universe is for grown-ups too!”? And most concerningly, there is J.K. Rowling herself. I can’t help but entertain suspicions that she’s been trying to appeal to both her adult audience as well as the kids in the most recent books, to their detriment. (Then again, it should be remembered that the kids who were eleven when The Philosopher’s Stone was published are 21 today: Rowling may feel an understandable obligation to those original readers, as well as the Johnny-come-latelys.) These disquieting concessions to the grown-up interlopers isn’t restricted to the Harry Potter series: Pullman’s The Amber Spyglass is, at the end of the day, more about Pullman being bitter about religion to anyone who’ll listen than actually telling a coherent story to the children the book was supposedly written for. 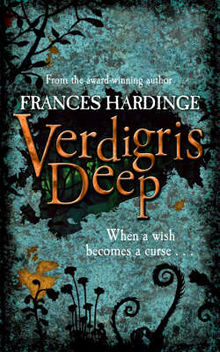 This is why I am so glad to read a children’s fantasy novel which is resolutely for children. This is not to say that Frances Hardinge’s Verdigris Deep holds no interest for adults – I greedily devoured it over the course of two nights – but it is a book that speaks mainly to children, about children’s concerns, through the point of view of children, whilst perhaps trying to impart a little wisdom about growing up on the side – and as Dan pointed out to me when we were discussing the book the other day, all the best children’s stories are about growing up.