Glen Duncan is either a tosser or has gone out of his way to convince the world that he is a tosser, which in the long run kind of amounts to the same thing. In I, Lucifer he writes a novel from the point of view of the Devil, who is offered a month to live as a human being as a sort of test run; if he likes it, then he can spend a lifetime as a human and through that means seek redemption for his sins, if he turns it down then he turns it down and destruction at the End of Days goes ahead as scheduled in Revelations. The specific human being he gets to test-drive is one Declan Gunn, a writer living in London, whose suicide attempt provides the perfect opportunity for Declan’s soul to be shuffled over to Limbo for a while whilst Lucifer puppeteers his body. Anagram fans shouldn’t need to gaze at “Declan Gunn” for too long to get an idea of why the novel doesn’t leave me too well-disposed towards Glen Duncan, who seems to treat the piece as a literary exercise in talking like an unlikeable arsehole. 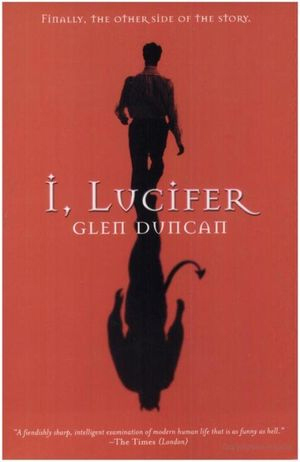 Lucifer, who true to form isn’t participating in this exercise in anything remotely resembling good faith, at first decides to go on a rape-and-murder spree so that when Declan gets returned to his body he’ll have an awful lot of explaining to do, but angelic intervention reminds him that God is not going to allow him to have quite that much fun. So, instead Lucifer becomes the capital’s biggest party animal, using his power over demonic forces to fund a drink and drugs binge which lead to him coming into contact with media mogul Harriet, who decides that this nutjob clairvoyant with the Devil schtick is a barrel of laughs and a film about the life story of Satan written by him would be fantastic. The book itself consists mostly of a rambling attempt at a novel by Lucifer, written when he’s taking a break from hammering out the movie script. (The angel Raphael writes the final chapter which recounts Lucifer’s exit from Declan’s body, and Declan himself steps in to do the epilogue.) As such, the book is 99% in Lucifer’s voice, and like Colonel Pyat’s it’s a voice which is very difficult to like: specifically, it’s the arrogant drone of a complete tosser who thinks he is far cooler than he actually is. As with the Pyat books, this is a view which over the course of the story is subtly contradicted by the author, though not quite regularly enough to make me 100% convinced that Glen Duncan doesn’t secretly think his Lucifer is actually kind of cool. Unlike the Pyat book, I’m not too thrilled with what I see when I peel back the narrative voice and look underneath.