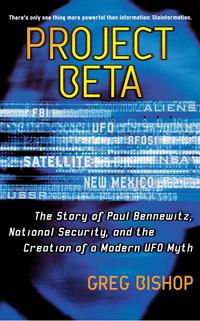 Greg Bishop’s Project Beta: The Story of Paul Bennewitz, National Security, and the Creation of a Modern UFO Myth cuts to the heart of a startlingly high proportion of the UFO conspiracy theories of the 1980s and 1990s, and in particular focuses on two men who between them played significant roles in the development and propagation of almost all the wildest conspiracy theories of that era.

On one hand, you have Paul Bennewitz, engineer and businessman. Living and working in close proximity to Kirtland Air Force Base, Bennewitz became convinced that he was at the centre of a conflict involving devious alien infiltrators operating out of a hidden underground base beneath the sleepy town of Dulce (said base having been provided to the aliens by the US government in return for alien technology).

On the other hand, you have Bill Moore, a UFOlogist whose work included collaborating with Charles Berlitz on books such as The Philadelphia Experiment and The Roswell Incident – both of which turned the titular subjects from mostly-forgotten rumours into cornerstones of UFOlogical conspiracy theories. Moore, along with Jaime Shandera and Stanton Friedman, played a key role in bringing to light the so called Majestic-12 documents, purported government documentation suggesting that a secretive body called MJ-12 was covering up the existence of government contact with alien races… but as we’ll see, there are very good reasons to doubt Moore’s credentials as a researcher.