As I mentioned in my review of Let the Galaxy Burn, the Black Library has often scouted for new talent by soliciting short stories. In the past this usually took place through the medium of Inferno! magazine, and resulted in the publication of a certain number of substandard stories simply because of the necessity of filling the page count on a regular basis. More recently, they have taken to running annual short story competitions, with the winners having their stories printed in an anthology and offered the chance to write for the Black Library on a regular basis. 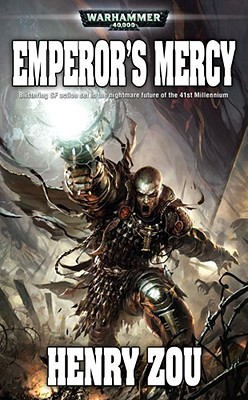 One winner of these recent contests is Henry Zou, whose Emperor’s Mercy is well-rooted in the military SF tradition that underpins most Warhammer 40,000. It’s very obvious that his day job in the Australian Army informs a lot of his writing; he’s open about using his own experiences and the experiences of his colleagues to inform the stories, and this can be seen in everything from the fast-moving and vividly described battle sequences to the little details sprinkled here and there about how the characters are holding their guns or cooking their rations. He never falls into the trap of spouting his knowledge simply for the sake of it, but the fact that he’s had personal experience of actual military service makes his depiction of the rank-and-file Guardsmen particularly rich.