Although currently Warhammer 40,000 is Games Workshop’s flagship line, until the late 1990s the Warhammer fantasy world was king. Thus, whilst Space Marine novels vomit forth from the gaping maw of Games Workshop’s in-house publishing arm, the Black Library, there was once a time when Warhammer 40,000 novels were a comparative rarity. In the period between 1989 and 1995, when Boxtree published Warhammer and Warhammer 40,000 fiction under licence, the fantasy line saw the release of nine novels in three different series by three different authors, as well as three short story compilations. By comparison, Warhammer 40,000 enjoyed but a single short story collection, Deathwing, and four novels. All of the novels were written by Ian Watson. One of them was Space Marine, the story of a young man’s sexual awakening. The other tales formed an unnamed series which the Black Library, when it decided to reprint them, referred to as the Inquisition War trilogy.

As with Space Marine and Deathwing, Inquisition War has dated a bit more compared with the Warhammer fantasy novels of the time, due to the greater changes that have occurred in 40K canon since then. When Deathwing was republished by the Black Library, Grimm the Squat – a character in Inquisition War who appeared in one of the stories – was replaced with an uninteresting tech-priest character, due to Squats being removed from the universe. Watson wasn’t thrilled by this, so when the Black Library decided to reprint the Inquisition War trilogy – first as individual volumes, and later as the attractive omnibus edition you see to the right, a compromise position was reached whereby it was prefaced with a little statement that the books were reproductions of heretical texts from the 40K universe and therefore weren’t actually canon. (The idea would later be adopted wholeheartedly when the Black Library started a line of print-on-demand rereleases of books where they didn’t feel there was a market for a mass reprint – the new Heretic Tomes line consists of novels which contained a large amount of material which is no longer canonical – or was never canonical to start with but got published anyway due to sloppy editing. Yes, Space Marine has been rereleased in this series.)

So, as with Space Marine the novels deal with a version of the setting that’s quite different than what we’re used to. And just like with Space Marine, even when you take that into account the books still read like Watson was on crack when he wrote them.

END_OF_DOCUMENT_TOKEN_TO_BE_REPLACED 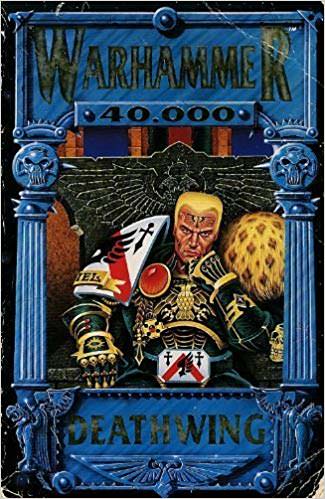 END_OF_DOCUMENT_TOKEN_TO_BE_REPLACED

Unlike the Warhammer Fantasy world, the universe of Warhammer 40,000 has changed radically since its first inception, to the point where entire major intelligent species have been tossed into the memory hole because they no longer fit the atmosphere. There have been many casualties of this slow progression of the mileau from an anything-goes universe where anything that might happen in the pages of 2000 AD might be encountered to a more focused variety of grim far future darkness, and amongst these casaulties is Space Marine, Ian Watson’s 1993 novel. Whereas most of the early Warhammer Fantasy tie-in novels remain in print – even dreck like the Konrad Saga – Space Marine has been allowed to vanish, the stated reason being that it happens to deal with large amounts of material which has been removed from the Warhammer 40,000 canon.

Except, I begin to wonder whether there isn’t more to it than that. You see, it isn’t just that Space Marine takes place in a universe which no longer quite resembles the official Warhammer 40,000 setting. Space Marine is also more than a little gay.

[…] the boy’s green eyes gleamed with evident intelligence… and with fierce emnity… and with a kind of fascination, as he weighed the mask in his hand and stared at its former wearer, now revealed.

For Lexandro sported no scars whatever on his comely, olive-complexioned face – only a ruby ring through his slim right nostril. […]

The scum kid seemed about to fit the mask to his own face so as to hide his savage features… or to become, for a few moments, the reflexion of Lexandro who lived such an unimaginable, foreign life.