The premise of The Forever War is a pretty simple one: after discovering a “collapsar”-based method of faster than light travel (which as far as I can tell involves diving into black holes at just the right angle), humanity has extended its reach to the stars, but has ended up in a war for territory with the baffling Taurans. Our protagonist, William Mandella, would rather have finished college and become a physics teacher, but is instead drafted into the UN space forces to fight on the front lines, under a system in which the best and the brightest minds are chosen to go into battle – because when you’re facing off against incomprehensible aliens on a battlefield which is as close as anywhere in the universe gets to absolute zero, getting to grips with power armour which amplifies your strength a hundredfold, or coping with the consequences of travelling in a starship accelerated to close to the speed of light, you need to have a certain amount of smarts just to cope with the physical implications of all of that, not all of which are obvious. 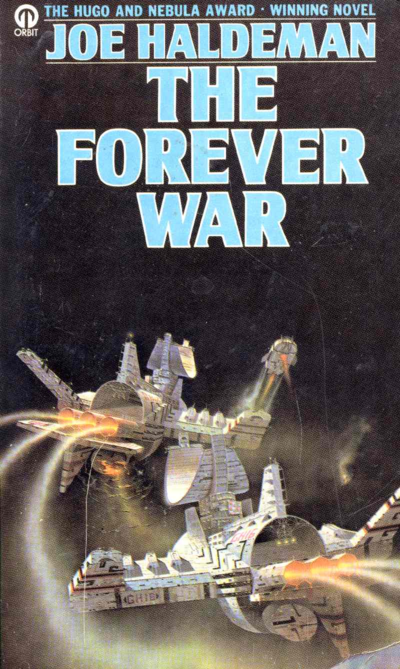 It’s the relativistic travel which really tests Mandella to the limit. If he dies on the battlefield, he dies – which is bad enough, but a possibility Mandella accepts. But the time dilation Mandella experiences as a result of travelling at near-light speeds means that though not very much time passes for him at all, years, decades, and eventually centuries pass by on Earth. Every time he returns home or encounters a new batch of recruits he discovers that the world he left has changed in so many ways that he finds it increasingly difficult to fit in. At first he’s like someone born back in the 1920s having to deal with our modern world with our internets and our jet planes and our nuclear bombs and being civil to black people and homosexuals… and then he’s like Galileo trying to keep up with a lecture by Einstein… and eventually, human civilisation becomes so strange that even colleagues five hundred years Mandella’s junior find it impossible to adapt.

The Forever War is in some respects a real trailblazer. On the one hand, it’s a novel written from a standpoint which is interested in the scientific and technical basis of the setting’s innovations, with Mandella’s grasp of physics giving him some ability to explain to a reader just why fighting on a battlefield a degree above absolute zero isn’t just like fighting in Antarctica, only colder, or the means by which the soldiers survive sustained accelerations of multiple g-forces, or the precautions and implications of using power armour of the type described in the book. That would usually classify the book as “hard” science fiction – but Haldeman is also more interested in depicting societal changes and the cultural impact of the story’s technologies and events, which traditionally is the sort of thing that “soft” science fiction is more interested in. I can’t think of many other writers who straddle those two categories as effortlessly as Haldeman does here.