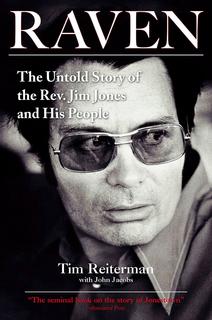 If anything, Tim Reiterman was even closer to the events recounted in Raven than Bugliosi was in Helter Skelter. Whereas Bugliosi only arrived on the scene after the fact in Helter Skelter and can only directly attest to what went down in the trial, Tim Reiterman was part of the team of journalists accompanying Congressman Leo Ryan’s doomed visit to Jonestown, and was wounded in the People’s Temple attack on the party (and the group of Temple defectors they were trying to get to safety) at the Port Kaituma airstrip.

Horrifying as it was, that attack was a mere foretaste of the carnage that Jim Jones was simultaneously planning in Jonestown, as he led his people in a carefully rehearsed process of murder and mass suicide that was, at least as Jones explained it, intended to act as the ultimate protest against a capitalist world that wouldn’t leave them be. There is room for debate in terms of how serious he was about this motive – his claims that “mercenaries”, the Guyanese army and other hired guns of capitalism were out to invade and destroy Jonestown were backed up by faked assassination attempts, just as earlier in his career his claims of healing powers were backed up by faked faith healings, so there is every chance that he didn’t really believe his own rhetoric captured on the infamous “Jonestown death tape” about how soldiers were going to swoop in and torture and kill all the town’s inhabitants.

What is not in doubt is Jones’ commitment to mass suicide as an exit strategy: as well as the famous “White Night” drills that prepared the inhabitants of Jonestown for self-destruction, Raven documents how Jones was running hoaxed suicide drills even when he was headquartered in the United States, years before Jones’s spiralling paranoia, increasing legal and journalistic scrutiny, and a string of defections from the People’s Temple prompted his retreat to his Guyana hideaway. Given the Temple’s vehemently (and often counter-productively) aggressive responses to even a hint of journalistic curiosity or law enforcement interest, an arguable case could be made that what Jones was really doing on that final White Night was fleeing the consequences of his actions, his pride rendering him unable to face either the criminal charges that would have inevitably followed the attack on the Ryan party or the exposure of his secrets that would follow.