I’d previously been quite impressed with issue 1 of Hellebore, an attempt to do a graphically appealing folk horror periodical in print, and I’m glad to see that it’s survived to produce a second issue, even in the midst of this strange springtime. Issue 2 is the Wild Gods issue, and as the title implies it concerns itself in various ways with the concept of deities living in or presiding over untamed nature. 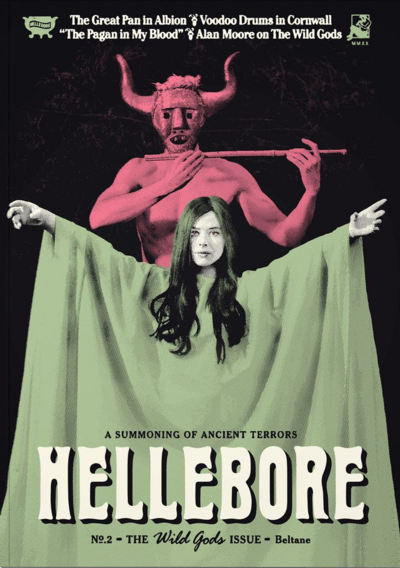 Katy Soar offers an overview of the latter-day British fascination with Pan, from 18th Century libertines of the Hellfire Club ilk adopting him as a patron of hedonism to Crowley and Victor Neuburg’s occult experiments to the Findhorn collective and all sorts of other revivals besides. She seems to miss Pan’s strange, incongruous appearance in The Wind In the Willows in the chapter The Piper At the Gates of Dawn, which Pink Floyd would later take as the title of their debut album (which, due to Syd Barrett being the band’s leader at the time, is arguably the most Dionysian and Pan-aligned of their releases).

I’d also be interested in Soar’s thoughts on Pan’s emergence in Hellier as a major figure, though this goes beyond the British shores she’d initially restricted her survey to; the way the team there end up resorting to Pan worship puts me in mind of how Soar argues that, precisely because Pan was a loose, easy-going mythological figure who tended not to have much of an intricate dogma associated with him, he’s more available for revivalists to try and experiment with than deities associated with more involved and difficult forms of worship to replicate.

Similarly informative articles come from Melissa Edmundson and Anna Milon. Edmundson gives an overview of womens’ writing about Pan and Pan-like figures from the late 19th and early 20th Century, identifying as she does so a small-scale movement to recontextualise Pan away from being just some rude dude who terrorises and rapes women and into a figure who represents a more nuanced engagement with the world, nature, and sexuality. Milon provides a fascinating anecdote about how a prehistoric cave painting which may or may not have antlers – depends on the photo you’re looking at – might have influenced Margaret Murray’s Witch-Cult In Western Europe theories.

John Reppion makes two contributions. His first is an interview with Alan Moore in which Moore seems to buck against the very notion of folk horror – opining that the Wild Gods might instead walk in urban areas, because only urbanised people regard the rustic and rural as being frightening or special. It’s a fun read, but mostly for how Moore steers the conversation towards his particular areas of interest and refuses to engage with Reppion’s thoughts. Reppion has a bit more success with an article about the Wild Hunt and the history of that particular folkloric idea. Reppion’s other article is a piece on the Wild Hunt, a decent overview of the different forms this legend has taken that takes an unfortunate turn into overt neopagan proselytising which is about as gratingly unwelcome as any other form of proselytising.

Other less successful articles include Kate Laity’s musings on the fairy folk which doesn’t seem to construct much of an argument or have much of a point to it, and Ruth Heholt’s examination of Hammer’s Cornish duology, which is hamstrung by arguing that it’s one of the few zombie movies which follow the Haitian folkloric concept of the zombie being raised and directed at the will of a sorcerer rather than just getting up and chowing down on people in an uncontrolled manner.

This is either a clumsy misrepresentation of the history of the genre or exposes a gap in Heholt’s knowledge: before George Romero’s Night of the Living Dead, the pop culture concept of the zombie was “mind-controlled undead slave directed by wizard”, and zombie movies tended to depict them as such going back at least as far as White Zombie from 1932. It might just be a misstatement on Heholt’s part, but if so it’s a pretty serious one since it puts no caveats suggesting she really means “zombie movies from 1966 onwards” or whatever. As it stands, the text of the article reads like Heholt doesn’t understand the history of the subgenre she’s talking about, which is a problem when she is making sweeping statements about where Plague of the Zombies stands in the world of zombie movies as a whole.

On the whole, this issue was thicker than issue one by about 20 pages or so, tended towards more substantive articles, and generally improved on the weak points of the previous issue and maintained its strengths. Hopefully we’ll see an issue 3 this coming autumn…