William Torbitt’s Nomenclature of an Assassination Cabal – published by Adventures Unlimited Press in an edition with commentary by Steamshovel Press editor-publisher Kenn Thomas as NASA, Nazis & JFK – ranks next to The Gemstone File in the annals of JFK conspiracy theory samizdat. First emerging in 1970 and widely photocopied before being transcribed online, it’s a dense info-dump of data intended to trace the assassination of JFK back to a disparate network of US government agencies, White Russian exiles, ex-Nazis (and not-so-ex ones), Mafia operatives, and various generically fascist or hardcore anti-Communist types. 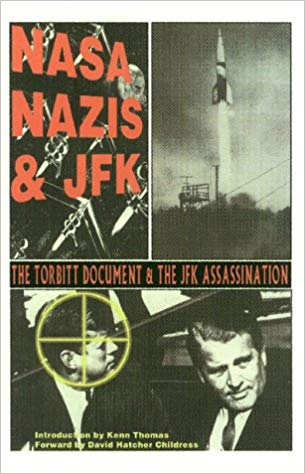 Torbitt’s writing style is incredibly hard to follow, with a tendency to just confusingly jump from subject to subject without really unpacking what he means about anything, but a regular set of themes become apparent early on, the main one being his contention that Swiss corporation Permindex and the (quite possibly fictional) government agency DISC (Defense Industrial Security Command, supposedly the arms industry’s very own secret police) were central organising entities for the Kennedy assassination, along with Division Five of the FBI. Exactly who was responsible for what in all this and who was calling the shots ultimately is far from clear, and the text almost reads like Torbitt wasn’t entirely sure whether to primarily blame Division Five, Permindex or DISC and keeps vacillating between the three.