Marcus Sedgwick’s The Book of Dead Days has, Google tells me, been misidentified as steampunk. The inappropriateness of the label is amazing since there is absolutely no steam technology on display in the novel at all. There are primitive experiments in electricity, but they are not of a widely-known or publicised nature – they’re on the level, in fact, of the sort of experiments which inspired Mary Shelley when she was writing Frankenstein, so it’s suggestive of a pre-Victorian era. And more notably, there is absolutely nothing which even hints at industrialisation or widespread technological development in the setting; the Industrial Revolution which brought about the Age of Steam, and which is absolutely intrinsic to the steampunk aesthetic, either has not happened in the almost-Europe of the setting, or it has passed by the nameless City in which the story takes place, the decaying capital of an almost completely defunct empire. And yet, because some people have been pretty much conditioned to attach the term “steampunk” to anything that moves, they insist on calling it steampunk, just as they attach the term to any fantasy that takes place in a setting earlier than the modern day but subsequent to the Renaissance, doing a disservice to both steampunk and fantasy alike. 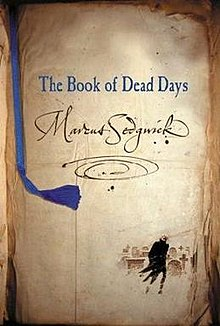 What The Book of Dead Days resembles more is a gothic melodrama for the young adult market, as it tells the tale of Boy, a young lad so called because for his formative years he was a homeless orphan with no idea of his true family. Boy has been taken in by Valerian, an acclaimed stage magician and amateur scientist who, years ago, dabbled in the occult and sold his soul to the Devil, who’s coming to collect on New Year’s Eve. The action of the novel unfolds during the “dead days” between Christmas and New Year, which is supposedly when the spirit world exerts a baleful influence over our own, and follows Boy, Valerian, and Willow, a girl employed by a singer who works at the same theatre as Valerian, as they try to hunt down a book which supposedly contains the knowledge Valerian requires to escape the curse.