Black Library’s extensive bibliography of Warhammer and Warhammer 40,000 fiction, for the most part, consists of conventional novels and short stories, but from time to time they’ve produced texts of a different nature – books which are written entirely in-character, presented as artifacts from the settings in question. In recent years, Black Library’s produced some welcome reprints of some such books which they’d allowed to fall out of print a while back – one from the far future of Warhammer 40,000, and one bridging its setting and that of the Old World of Warhammer. 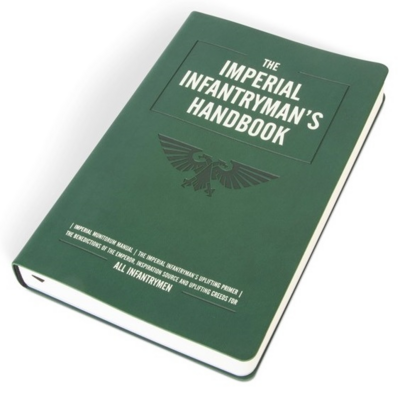 This is a reprint of two books previously printed separately – the Imperial Munitorum Manual (by Graham McNeill) and the Imperial Infantryman’s Uplifting Primer (by Matt Ralphs). Both of these are internal documents from the Imperial Guard of Warhammer 40,000; the Munitorum Manual is a guide to its internal bureaucracy, logistical processes, equipment, medals, procedures and so on, whilst the Primer represents the sort of propaganda that its frontline troopers are bombarded with as a matter of course.

Presented as a convenient little pocketbook – and including a delightful section at the end providing a selection of prayers to the God-Emperor, modelled on the sort of condensed hymnals produced for the front line in the British Army, the Handbook – much like the constituent books that make it up – is an amusing read by itself, given that it highlights the dysfunction of the Imperium and the utter lies offered to its fighting forces via the disparity between the statements offered in there and the facts which the reader knows from other sources to be true.

In addition to this, it’s a nice prop for anyone into the 40K tabletop RPGs, or who plays LARPs inspired by the setting. One of my fondest experiences of the Death Unto Darkness LARP was playing an Ecclesiarchy priest leading the PCs in a stirring morning prayer, using the prayer section in the Uplifting Primer for fodder. 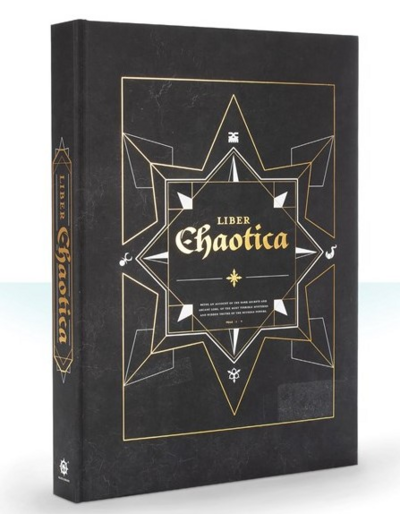 First published as four separate books – Liber Khorne, Liber Slaanesh, Liber Nurgle and Liber Tzeentch – before being reprinted with a new Liber Undivided section of additional material at the end under the Liber Chaotica title, this is presented as a compilation of research on the nature of Chaos by Richter Kless, a scholar given special dispensation by the Grand Theogonist of the Church of Sigmar to plumb the Empire’s archives in search of forbidden knowledge. (The actual authors were Marijan von Staufer, for the Khorne and Slaanesh books, and Richard Williams for the remainder.)

What this actually amounts to is a gorgeous coffee table book of artwork, sketches, and little essays on Chaos, with flavourful scribblings in the margin and the like. In principle, this is a reprint of a reprint – the original combined Liber Chaotica having fallen out of print years ago – and part of me wonders whether some of the edges of the pages have been missed off here, given that some of the text spills off there. In addition, some of the random scribblings are incredibly hard to read, and being unable to check against the original I am not sure whether this was a deliberate aspect of the original books or an error that has worked its way in through the reprint process.

Still, nonetheless the book is here more for eye candy and the occasional little story than for any other purpose, and in that light it’s pretty neat. Whilst focused on the Old World of Warhammer (the setting which was blown up to make way for Age of Sigmar), there’s occasional insights into the Warhammer 40,000 universe via the medium of Kless utterly tripping balls. For Warhammer Fantasy Role Play purposes, this is a nice source of ideas for adventures, or a book you can just dump on the player characters and let them damn themselves with the information therein; there’s a few references to the End Times metaplot which brought an end to the setting, but not overwhelmingly so, and it doesn’t feel too out of place in the WFRP interpretation of the setting (which has a somewhat different focus from the wargame).