Dan Abnett’s Gaunt’s Ghosts series is often cited as convincing Games Workshop and Warhammer 40,000 fans alike that you could have a decent 40K novel which didn’t centre around Inquisitors and Space Marines, the two most over-the-top breeds in the Imperial kennel. It was inevitable that sooner or later someone would attempt to do the same for the Adeptus Arbites, the police and justice wing of the Imperium whose officers are judge, jury and executioner all in one – and if that sounds a lot like the premise of Judge Dredd, that’s probably because the Adeptus Arbites are blatantly the Justice Department of Mega-City One transplanted to the 41st Millennium, right down to their uniforms. 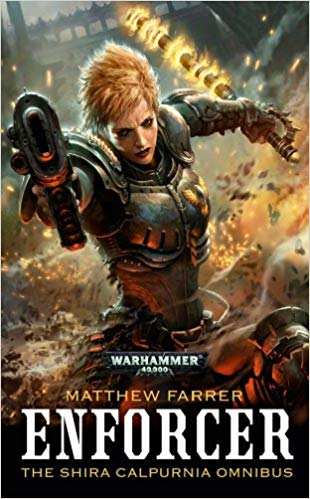 Part of the reason the Arbites haven’t had so much attention from Black Library authors is probably because of the similarities to Judge Dredd, which could make it difficult for authors to write stories that don’t come across as 2000 AD fanfic. Another reason may be that they are simply a less high-profile aspect of the setting – there’s no official Arbitrator army for the tabletop wargame, the mean streets of Necromunda didn’t provide any official support for including Arbites in the game, and Inquisitor is out of print. The only currently-active Warhammer 40,000-themed game in which you can actually play an arbitrator is the Dark Heresy roleplaying game, and there the focus is on the activities of the Inquisition, not the Adeptus Arbites (though Fantasy Flight have announced a supplement focused on the activities of the Arbites and the criminals they pursue, which might make an all-Arbites game viable). The cross-media synergy you get with Space Marines, the Imperial Guard and Inquisitors simply isn’t there; a Dark Heresy player who wants to read Inquisition-based stories can buy Eisenhorn, someone particularly taken with Gaunt’s Ghosts can build an Imperial Guard army, but if the Black Library publishes novels about the Arbites it’s hard to say which Games Workshop product lines will really benefit from that.