As a guy who’s the founder of the Skeptics Society, is pals with James Randi, and frequently cites the less polemical books by Richard Dawkins, you might be forgiven for thinking that Michael Shermer might be slightly abrasive, the sort of guy who simply lacks patience with people’s eccentric beliefs. Far from it; in Why People Believe Weird Things Shermer attempts to understand the reasons behind people adopting strange, irrational beliefs (in which category he does not include religion – although apparently he discusses it in the sequel, Why People Believe In God), and therefore comes across as less blustering and intolerant than, say, Richard Dawkins does in The God Delusion. 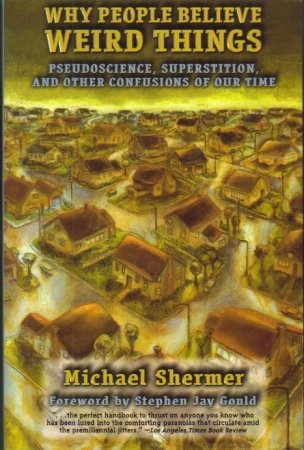 Shermer is in an excellent position to take his approach, having travelled all over the ideological map before becoming a rationalist sceptic – he’s been a fundamentalist Christian, a keen consumer of New Age therapies ranging from acupuncture and massage to negative ion generators and pyramid power, and an uncritical follower of Ayn Rand in his time. It was the extraordinary amount of time, energy and money he wasted on the New Age therapies which seems to have prompted his scepticism; as he explains it, he simply reached the point where he couldn’t keep rationalising their failure. With his academic background as a historian of science, he is also well-qualified to explain scientific ideas without resorting to scientific jargon; even if he sometimes can’t quite explain why people believe particular weird things, he’s always able to explain why those things are wrong.