As reviewed previously, S.T. Joshi’s original Black Wings of Cthulhu collection found him collecting a bunch of all-new original Cthulhu Mythos stories which, whilst a bit hit and miss, at least managed to be an interesting exploration of the breadth of the field and, to my eyes, ended up with a better batting average than more pulp-oriented collections. 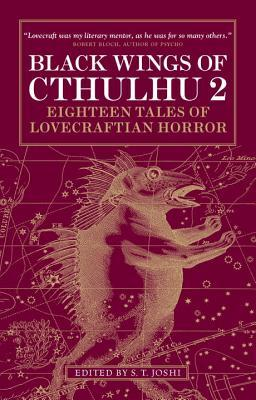 I was happy to find that the second Black Wings collection managed to hit a higher overall standard than the original. Part of it is that it’s a little slimmer – Joshi realising that it’s better to have a slightly slimmer book with less poor stories in it than a fatter book with a worse hit-to-miss ratio. Part of it presumably comes from the fact that the original collection made Joshi’s name as a Mythos anthologist – which means that a greater spread of writers would then submit their stories to subsequent volumes, giving him a deeper bench to choose from.

END_OF_DOCUMENT_TOKEN_TO_BE_REPLACED 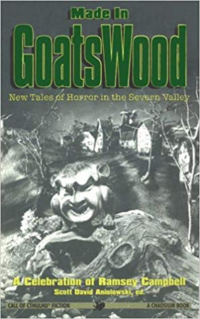 END_OF_DOCUMENT_TOKEN_TO_BE_REPLACED

Back when Shim reviewed Black Wings of Cthulhu, Adrienne gave a recommendation for the work of Nick Mamatas, whose Cthulhu Mythos stories are compiled in the punningly named Nickronomicon from the Innsmouth Free Press. Both Shim and Adrienne were somewhat turned off the collection, however, due to reports that Mamatas’s horror is genuinely, well, horrific.

This, naturally, attracted me like a moth to a flame. Unfortunately, no enjoyable burning sensations were forthcoming, the end result feeling more like bumping up against a fluorescent light tube you’d thought was the sun. Let me dust off my wings and give you the lowdown…

To give Mamatas his due, he knows this territory well. He’s the sort of Lovecraft fan who has not only bothered to read the Selected Letters, but actually can mimic their style quite well, which turns out useful in those stories that play the “Lovecraft hit on something real” card (in itself an old standby of post-Lovecraft contributions to the Mythos). At the same time, he also has a fairly rounded view of the man and doesn’t set him above criticism – in particular, Mamatas refuses to deny Lovecraft’s well-documented racism, and appears to hold the (decidedly reasonable) position that The Horror At Red Hook is irredeemable trash.