Patricia Highsmith’s first brace of novels, published in the early 1950s, get a great deal of press. Strangers On a Train, her first novel, is accepted as a classic of the crime genre. Her fourth book, The Talented Mr Ripley, inaugurated the excellent Ripley series of novels. Even her second novel, The Price of Salt, AKA Carol, gets a fair amount of attention since it is one of the few stories where she directly addresses homosexuality as opposed to using serial murder as a metaphor for it or something. The Blunderer, her third novel, gets short shrift by comparison, which is incredibly unfair since it provides another take on the same subjects that inform Strangers On a Train and The Talented Mr Ripley. 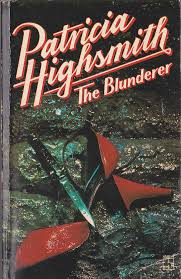 The premise is simple: Melchior Kimmel, a brute, catches up with his wife while she is on a cross-country bus journey and murders her, and more or less gets away with it. Walter Stackhouse, an ineffectual lawyer cursed with an unrelentingly vile wife, learns of the case and (correctly) speculates that Kimmel himself may have been the killer. As his marriage enters terminal decline, Walter becomes obsessed with the Kimmel case, to the point where he actually seeks Kimmel out to talk with him. Eventually, the horrible Clara sets off on a bus journey of her own, and Walter follows her with a half-formed intent of killing her. Before he can muster the courage, however, she commits suicide. Walter, although innocent, begins to look increasingly guilty as a ruthlessly ambitious policeman tries to track the case; Kimmel, while appearing innocent, finds that Walter’s actions are beginning to incriminate him.

As always, Highsmith delights in manipulating the reader throughout this. By barely depicting Kimmel’s wife, she ensures that we never sympathise with Kimmel’s murderous deed; by giving us a detailed account of Clara’s terrible behaviour, we end up wanting her dead as much as Walter does. The main police detective is just as monstrous as Kimmel: relentless, violent, and abusive, he uses every means at his disposal to make life uncomfortable for Walter and Kimmel – and since he is the only major police character, he makes sure we don’t side with the authorities. At every point Highsmith makes sure our sympathies are with Walter, even though he’s only innocent because of his own incompetance.

About that. Walter is, of course, the blunderer of the title. He’s a wreck. He’s that he’s stupid, it’s just that he is physically incapable of taking any course of action which might help his position. His main failing seems to be his faith in the law and the idea that if the facts were laid out he would be exonerated and that would be the end of it, his infatuation with the Kimmel case leading him to an ill-advised association with Kimmel himself, and the fact that he considers himself guilty by intent if not by deed. Additionally, he is done in by people’s willingness to take meaningless circumstantial coincidences as proof of his guilt. By the end of his novel he is shambling towards a final confrontation with Kimmel with his reputation in tatters, all because of his failure to come clean from the word go – but of course, since he considers himself guilty, any such confession would have been suicidal.

Patricia Highsmith’s crime fiction ranks amongst the best in the genre, and The Blunderer, while not the obvious starting point, is as good as any.