The undignified, blubbering, grumpy weeping on the part of certain Warhammer fans when it comes to the Warhammer Adventures line of kid’s novels set in the Age of Sigmar and Warhammer 40,000 universe certainly involved a lot of utter bullshit being spouted. The entitled self-appointed gatekeepers of the hobby couldn’t be honest and direct about some of their objections – such as the prominence of girls, PoC, and girls who are PoC in the proposed fiction series – so they had to talk a lot of nonsense which was demonstrably untrue.

An oft-repeated claim, for instance, was that the settings in question weren’t suitable for kids – this despite the fact that the books are pitched at a reading age of 8-12 year olds, an age which happens to match a good many hobbyists’ first encounters with Warhammer in its various flavours more or less exactly. A related complaint, equally unfounded, was that the Warhammer Adventures line would herald the Bowdlerisation of the settings, with disturbing material excised by dint of being not suitable for kids.

The latter complaint was especially ridiculous, since it could only sustain itself if you only paid attention to the Warhammer Adventures announcement and didn’t give any consideration to the other new fiction line Black Library had announced at more or less the same time. This line was Warhammer Horror, an imprint for stories set in any of the Warhammer universes which put a particular emphasis on their horror-oriented aspects – of which there are a great many. This is precisely the material which dullard nerd gatekeepers would have us believe Games Workshop was about to censor forever for the sake of capturing an 8-to-12-year old demographic which, so far as I can tell, they’ve rarely actually lost. 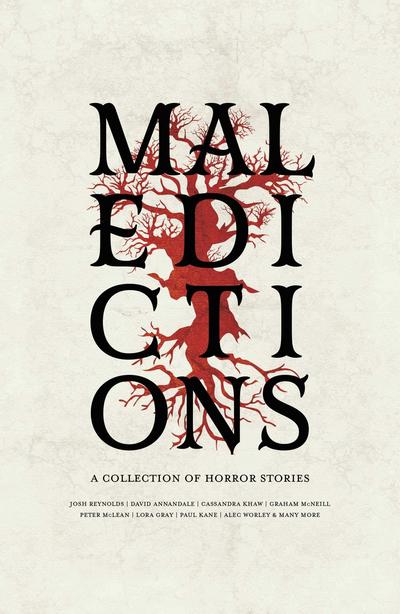 Maledictions is part of the first wave of Warhammer Horror releases – an anthology of short stories (with, concerningly, no editor credit) offering up a range of all-new horror stories in the Warhammer 40,000 and Age of Sigmar settings. Although the book doesn’t separate the stories out into a 40K section and an Age of Sigmar section, I will deal with the stories from the two sections separately anyway because my level of exposure to the settings differs greatly.