The nights are drawing in, and whilst Halloween is over it still feels a bit like folk horror season. A good time, then, to take a look at the third issue of Hellebore, the rather good folk horror magazine which I’ve previously reviewed the first and second issues of. 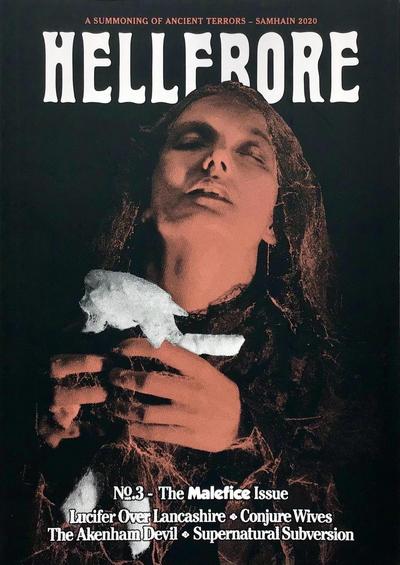 The issue leads off with Lucifer Over Lancashire, a consideration by Catherine Spooner of the Pendle Witches case and its cultural impact. This is a terse introduction to the subject matter which is bigger on the cultural impact aspects than the facts of the case, and plays into the editorial by editor Maria J. Pérez Cuervo about how witches and witchcraft can be icons of resistance – the idea of women with spiritual powers that can have effective, status quo-upsetting powers in everyday life, rather than their spirituality being essentially focused around deferred postmortem rewards, being subversive to the status quo even if those accused in the past were wholly innocent of the accusations against them. (Notably, the issue is dedicated to “the thousands who were tortured, imprisoned, and killed during witch-hunts”, rather than making the less supportable claim that any proportion of those people were actually witches in the sense that the authorities were accusing them of being.)

END_OF_DOCUMENT_TOKEN_TO_BE_REPLACED

Discovering Scarfolk is Richard Littler’s hardcopy version of his Scarfolk Council blog. The blog itself is mostly an exercise in nostalgic photoshop, producing various artifacts from the vaults concerning the fictional Northwest England town of Scarfolk that act mostly as spooky jokes about either the mores of 1970s Britain or present-day Britain – or, at its most successful, highlighting how the latter isn’t as distant from the former as it likes to pretend it is.

The lazy move when producing a book of this stuff would be to simply reprint the best images with the sort of minimal commentary they had with their original appearance on the blog. Instead, Littler exploits the extended mythology he’s created surrounding Scarfolk over the course of the blog’s lifespan and produced a full-blown novella winding its way through the book, which the various images serve as supporting images for.