This is the worst novel I have ever reviewed for Ferretbrain. That’s a big claim, but I am confident it is true. I am confident it will remain true for a long, long time. I got an e-mail out of the blue from someone I thought I could trust, asking if I was interested in reviewing a fantasy novel, I said yes, I read this book, it changed my definition of what “terrible” is because my previous conception of awfulness wasn’t sufficient to encompass just what a disaster this is.

Trigger warnings for rape and pedophilia by the way, gang. 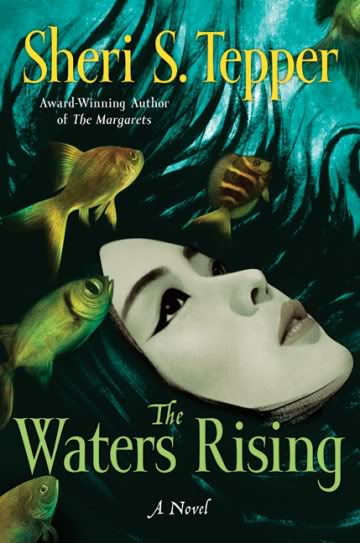 The Waters Rising is, in principle, a sequel to A Plague of Angels from way back in 1993. It came out in 2010 in the States and 2011 in the UK, making it eligible for the 2012 Arthur C. Clarke award, which it was shortlisted for. Christopher Priest got very angry about this on the basis that the book feels more like fantasy than SF, and the Clarke is supposed to be a SF award. Then again, China Mieville won the Clarke with The Iron Council, which is fairly clearly fantasy, and the SF/fantasy borderline isn’t as clear as some people might like. Then again, Priest was angry at the Clarke judges not just because he thought the books they picked weren’t SFy enough – he also thought they were shit and should never have been in the running. I haven’t read all of them because I have no particular desire to stay current with every single book which is currently making waves. But I have read this one. Dear God, I have read this one until I was sick to the back teeth. I can confirm that it shouldn’t have won an award. I can also confirm that in its present state it probably shouldn’t have been published. There’s trash authors who self-publish because no publishing house in its right mind would release their bilge who, despite their utter lack of anything resembling authorial skill, effortlessly manage to outwrite this crap. The book is terrible in both conception and execution.

The thing about Tepper is that her books are polemics. She makes no bones about this. Despite this, or perhaps because of this, she has a following anyway. I’d never read any of her work before this and am unlikely to in the future; I was mainly aware of her because Beauty was honoured with a spot in the Fantasy Masterworks series, but based on valse’s assessment this seems to have been a mistake. Of course, it’s possible to do polemic without being tedious or preachy, but on the evidence of this book Tepper seems to be completely incapable of doing so; on top of that, a lot of what she preaches here is reprehensible (there’s a nasty eugenics spin to the story) or actually counterproductive to the various causes she espouses. She’s known as an eco-feminist, yes, but she’s the sort of eco-feminist that embarrassess all the other ecologists in the room by behaving almost exactly like the sort of total cartoon that climate change deniers like to paint ecologists as.