Simon Rees’s career has a novelist seems to be bafflingly short; as far as I can tell he has published nothing since Nathaniel and Mrs Palmer in 1991, a book about which I can find out literally nothing save that it exists. That was his third book; his first one, The Devil’s Looking-Glass, came out in 1985, and seems to have been out of print ever since. This is a shame, because it’s a cerebral, low-key horror story that reminds me of Umberto Eco writing a story suggested by Dennis Wheatley.

It’s a short book – less than 200 pages – and tightly-plotted, Rees setting up a tense, claustrophobic atmosphere in which events seem to be rushing recklessly forwards, even when nothing much is actually happening. The story focuses closely on three professors at an unspecified Cambridge college (I suspect it’s Trinity, Rees’s old haunt). Professor Thomas is undertaking a parapsychological study, experimenting with clairvoyance through scientific (though less-than-rigorous) methods and a limited form of sensory deprivation. Dr Born is an untenured research fellow in Philosophy who has agreed to help him. Their experiments, however, are subtly manipulated by Professor Wiston, a sinister figure who gently intervenes for his own diabolical purposes. Soon enough, thanks to subtle hinting from Wiston, Born becomes fixated in his trances on the image of a black mirror, an Aztec artifact formerly in the possession of Elizabethan occultist Dr John Dee; visions of a possible past life as Edward Kelly, Dee’s assistant, and occult demands from strange power soon overwhelm Born, and threaten to wreck his life and Thomas’s career. 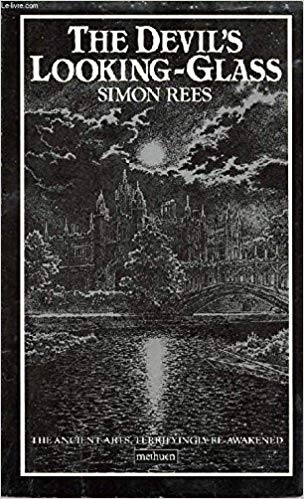 Rees cleverly mixes up the style of narration in this novel; much of the time, he writes in the third person as an omniscient and reliable narrator, but occasionally he presents crucial parts of the narrative through various bits of documentary evidence instead – mainly letters, notes, and tapes recorded by Born. These are much less reliable, especially since they fell into Wiston’s hands after the terrible events they narrate came to pass, and he has edited them accordingly. The entire epilogue, in fact, is narrated by Wiston himself, and he presents himself as a mere innocent bystander, his interventions in the experiments being mere academic curiosity (with perhaps a dash of collegite politics); of course, the reader isn’t fooled for a second. The ending is ultimately ambiguous, especially in the light of the prologue (which is narrated in the third person and shows us something of the aftermath of the events of the novel): has Born finally freed himself of Wiston’s vile influence, or has he placed himself even further in his power?

This is yet another book which convinces me of the need of a Horror Masterworks series: it’s been undeservedly out of print for two decades, and is in dire need of a revival. Rees’s skill in minimising the supernatural elements of the story while keeping them a constant, threatening presence shows an adeptness many competitors could only aspire to. I dearly wish that he’d write more, but I suspect his work with the Welsh National Opera takes up all of his time these days. That’s a pity; we could do with less Dean Koontz and Brian Lumley volumes clogging up the horror section in bookstores and more Simon Rees in there.