From the early 1970s onwards Italian politics became marred by increasing political violence on both sides of the political spectrum, with neo-fascist forces on the right and the Red Brigades on the left turning to increasingly brutal methods as both the Western and Eastern Bloc used Italy as a front in the Cold War. It was a paranoid time in which the groups acting on the street were fronts either directly controlled or indirectly manipulated by larger forces. 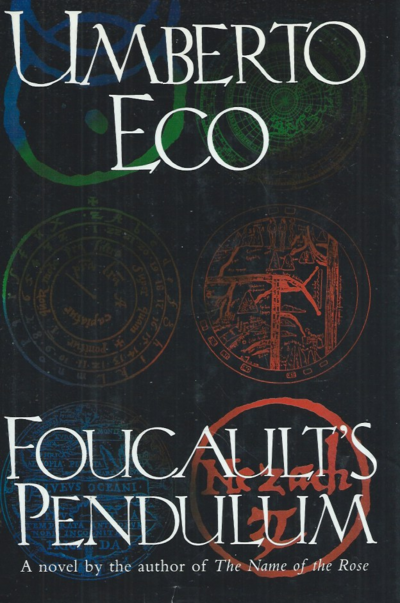 Fascist groups – as well as agents provocateur on the left – were backed by Operation Gladio, a NATO-backed “stay behind” paramilitary force intended to resist a Soviet Bloc takeover of Italy which had, depending on who you talk to, either slipped its leash and run riot or did exactly what it was supposed to do. The Red Brigades were supplied by the likes of the PLO and the Czechoslovakian intelligence service. In 1981 the bizarre Propaganda Due scandal revealed that Italian Freemasonry had become suborned into a network of political corruption and influence-brokering. Conspiracy seemed to be everywhere.

This is the political backdrop of Foucault’s Pendulum, Umberto Eco’s second novel. Set in the then-modern Italy of the 1970s and 1980s, it is narrated by one Casaubon, an intellectual sort whose heart is mostly with the hard left but who is alarmed enough by the propagation of ill-tempered violent rhetoric (which, remember, it would eventually turn out was partially driven by agitators set up by Gladio), and who seeks his refuge in his studies. A tendency to be a bit of an academic magpie, grabbing whatever seems shiny to him, Casaubon sets himself up as a researcher-for-hire after completing his studies, including a thesis on the trial of the Knights Templar.