It has become an iconic alien abduction story. Horror author Whitley Strieber (whose early hits included Wolfen and The Hunger) and his family split their time between their apartment in New York City and their out-of-town holiday home… which in true horror style is an honest to goodness cabin in the woods. Surprise guests arrive in the form of little grey UFOnauts who take away Strieber in the middle of the night, mess with his head, and stimulate his prostate a bit with a fancy vibrator. Under hypnotic regression, Strieber remembers all this and comes to the conclusion that this has been happening all his life – that he, his father before him, and his son after him are a line of abductees, destined to be taught important spiritual information and lovingly pegged by a big-eyed ancient space goddess. At the end of the book, he sits down and thinks about triangles for a while.

Communion was, for a time, the book on alien abduction. During that brief cultural space when alien abductions were a red-hot subject, Communion ended up becoming such a widely-cited text on the subject – the book people waved around to try and persuade sceptical audiences of the reality of the phenomenon, and the book which many abductees claimed resonated so closely with them. 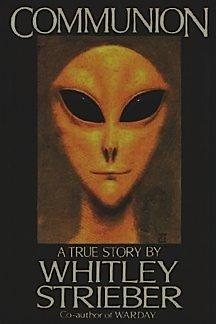 It’s rather odd that it has that status, considering how absolutely bizarre the book gets in some of its aspects, particularly towards the end. I can only assume that most readers got through the early descriptions of abduction experiences – undeniably creepy and haunting that they are – and perhaps a few of the hypnosis sections in the middle of the book before their attention wavered and they sort of gave up. Or possibly it’s the case that, as is very frequent in this field, people cherry-picked: they took the bits which supported their personal visions and theories about the abduction experience onboard as fact, whilst writing off bits which didn’t fit as Strieber filtering the information through his own worldview.

Strieber’s worldview is certainly eccentric; contrary to many of the claims people make about Communion, and the narrative he tries to frame, he is far from a rationalist, materialist sceptic at the start of the story. He claims to not have much interest in UFOlogy, but as we shall see, he has a deep interest in a number of esoteric subjects and philosophies – more than you’d really expect from a James Randi-style atheist materialist – and it is not only possible but likely that his whole abduction schtick is an exercise in working with these ideas.