In the discussion following Dan’s article on race in fantasy fiction, it was pointed out that we don’t seem to get much in the way of translations of SF beyond the English-speaking world. While cultural myopia probably bears much of the blame, I believe there are other factors at play. There’s the economic reasons, of course – why spend the money on translating someone’s work on top of the effort of getting the rights to their work when there’s always another English-speaking mug who thinks that he or she is Tolkien? Then there is the inherent difficulty of translating SF and fantasy – how to translate one particular made-up word such that it makes sense in another context? 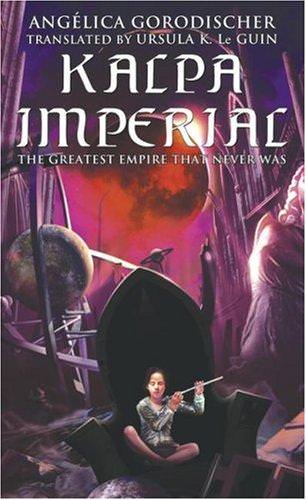 Of course, some authors are of sufficient stature that you can’t not translate them. Stanislaw Lem’s fiction has been praised within the English-speaking world for years. But there’s certainly not enough effort being made to translate the best of the world’s SF into English, and we anglophones are suffering for it. It is completely unjust that of all of Angélica Gorodischer’s work, only Kalpa Imperial has been translated. Then again, maybe the translation of great fiction requires a translator of comparable talent to the author. As you have probably noticed to the illustration to the right, Kalpa Imperial was translated by none other than Ursula le Guin. (Incidentally, my copy claims that she wrote the Bartimaeus Trilogy, which as far as I am aware is wrong – although John Stroud should probably take it as a compliment.)