If you want a lovingly depicted evocation of the era during which Henry VIII was dissolving the monasteries and defying Rome and generally setting England on a course of confrontation with the forces of Roman Catholicism for generations to come, I can make no higher recommendation than Hilary Mantel’s Wolf Hall; this is a masterful literary introduction to the life and career of Thomas Cromwell, one of the great self-made men of the era. However, even making allowances for its status as the first book of a trilogy whose last part isn’t out yet, it kind of lacks closure – there isn’t really a natural conclusion to the novel, it just kind of ends suddenly.

Left wanting more Thomas Cromwell, I was drawn to the Shardlake series by C.J. Sansom, in which a hunchbacked barrister from Tudor London solves murders under commission from a succession of historical figures – with his patron in the first two books being Cromwell himself. I have no idea whether splitting up the Shardlake series and grouping the novels by patron is an even vaguely sensible way to analyse the series, but it’s a convenient way to break it up for Reading Canary articles so hey, here’s a review of the two Cromwell-themed books in the series.

END_OF_DOCUMENT_TOKEN_TO_BE_REPLACED

I’d wanted to read more Hilary Mantel since quite enjoying Wolf Hall, and Beyond Black seemed to offer a good introduction to her contemporary fiction. As much as I’d enjoyed Wolf Hall, I thought it had been hampered by Mantel’s chosen structure for the story, and through being constrained to follow the historical record. Because it only covered Thomas Cromwell’s rise and left his fall to a later book it doesn’t offer very much closure – rather than providing a satisfying ending, it just sort of stops – and there were points when reading it when I thought that if I squinted really hard I could just about see the checklist of historical facts and incidents Mantel was working through as the novel progressed. 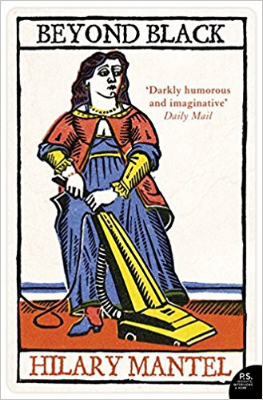 Beyond Black, by contrast, is set in the modern day and tells an original story about entirely fictional individuals, though it is inspired by fact. Specifically, Mantel got the idea for the story after watching a psychic demonstration by the sort of somewhat exploitative medium who really gets my back up – the type who get up on stage and use cold reading techniques to convince audience members that they’re talking to dead relatives. As Mantel explains in her notes in the ludicrous “DVD extras” section, it’s not an idea she has much sympathy for, but watching the show she became fascinated not with the medium’s claims, but the medium herself. This began a long period of research into the psychic healing, card reading, spirit contacting scene, the product of which is Beyond Black.