The Pursuit of the Millennium: Revolutionary Millenarians and Mystical Anarchists of the Middle Ages by Norman Cohn is a serious historian’s look at territory which has been, in recent years, overrun with cranks (especially those inspired by The Da Vinci Code). Although it steers clear of the Cathars – they don’t quite fit the theme of the book, and as Cohn notes had already been very thoroughly examined back in the 1950s when this book was originally written, it turns its attention to the sort of heretical sect which has been romanticised over and over again by historian, occultist, and crank alike. A glance at the literature covering the Catharist and Gnostic heresies that floods the Mind, Body and Spirit section in every major bookshop today suggests that many of the authors of such works are opposed to the Catholic Church in specific, and often organised Christianity in general, and are prone to fantasise about what sort of world we would have if only the beastly, repressive Church had not prevailed. 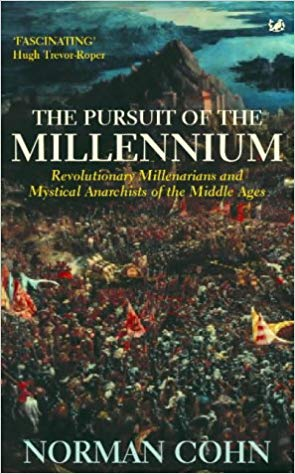 For those sick of Holy Blood, Holy Grail fantasies of peaceful, innocent, liberal heretics being oppressed by nasty, conservative, repressive churchmen, The Pursuit of the Millennium offers another take on medieval heresy. It does not let off the Catholic Church lightly – many of these heresies come to appalling, bloody ends – but it does not romanticise the heretical sects it covers either. Indeed, one gets the impression that many of them, had they ousted the Catholic Church and gained influence over all Europe, would have been even more repressive than the Catholics. Many of them were violently anti-semitic, and were opposed to even the limited amount of tolerance of the Jews espoused by the Church: we hear stories of paupers’ Crusades led by mad prophets, in which killing a Jew was considered a necessary cleansing step in preparing oneself for the journey to the Holy Land. Those who did not intend the destruction of the Jews tended to seek great massacres of the clergy, or of the rich. As well as the chroniclers of the time, Cohn relies on the heretics’ own literature to examine their beliefs – for like the Internet nutcases of our own age, the prophets of the End Times would issue great manifestos (such as the Nazi-esque Book of a Hundred Chapters by the anonymous Revolutionary of the Upper Rhine) promising death to their enemies, and swift extermination for any who break the Puritan, ascetic moral values espoused by the hereisarches.

This is not an examination of heresy in general, however, but a study of those sects who believed that the End Times were nigh: that the apocalypse predicted in Revelation was at hand. Often, as Cohn explains, the Johannine prophecies were mixed with the Sibylline prophecies (pieced together from various apocryphal apocalypses, and predicting that an Emperor of the Last Days will conquer the world through martial force in the name of Christ in order to enable the Second Coming), and the Joachite teachings (which taught that the Third Age, the Age of the Holy Spirit, would soon come, in which the Church would be swept away and a primitive form of Communism would reign). The followers and leaders of these groups tended to be the poor and disenfranchised. Cohn’s narrative takes us from the peasant bands who latched onto the First Crusade to the brief reign of John of Leiden, Anabaptist King of Munster, and provides a convincing argument that the apocalyptic dreams of these individuals would have an impact on the Protestant Reformation, Marxist theory, and the racial myth of Nazism. The climax of the book is Cohn’s stunning account of the dictatorship of John of Leiden, a portrait of a man gripped by religious megalomania who takes over the Anabaptist commune of Munster and turns it into his own private kingdom (in the process overturning its austere laws on sexual conduct and instituting mandatory polygamy).

For those who are tired of hearing about the Cathars and want to hear about some other heresies, for those who wonder precisely why the Church and State hated heretics so very much, and for those who simply love history, The Pursuit of the Millennium is an excellent read, covering a topic which still has relevance today; what is Left Behind, that bestselling account of the Antichrist’s takeover the UN and the UN’s conquest of the world, but a continuation of the tradition of End Times hysteria that dates back to the Middle Ages and beyond?