Despite being released shortly after the introduction of the new Warhammer Horror line, Requiem Infernal by Peter Fehervari – a Warhammer 40,000 novel of death, terror, corruption, and the disintegration of objective reality set in a storm-lashed citadel run by the Adepta Sororitas – isn’t billed as a Warhammer Horror release. This, given the general tone of things, seems to be a mistake – I mean, look at that cover art for one thing, that rendition of the protagonist glancing over her shoulder against a dark background hardly suggests the sort of battle-happy guns-blazing military SF which Warhammer 40,000 novels tend to go for.

The protagonist in question is Sister Asenath Hyades; the former name a nod to Lovecraft’s The Thing On the Doorstep, the latter a nod to Chambers’ King In Yellow. Asenath has lived many lives and filled many roles in the Adepta Sororitas – taken in and raised as a hospitaller medic, before winning her spurs as a Battle Sister and being chosen to accompany the mysterious Father Deliverance on a missionary expedition to an unreclaimed area of space, followed by various other roles in the wake of that before returning to the role of a hospitaller… and perhaps something more. 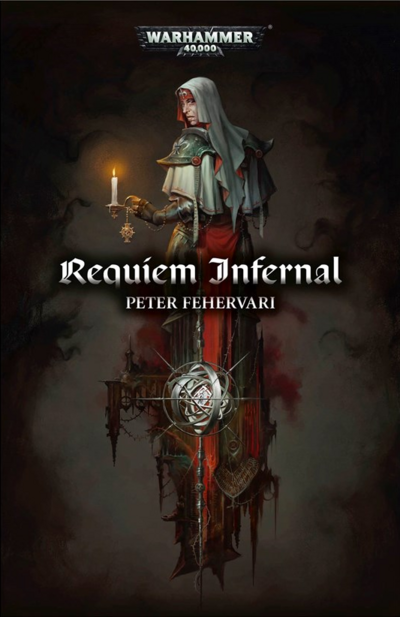 Asenath is that someone, but she’s not travelling alone. Following a nightmare encounter with an unknown foe, a mangled-up unit of the Exordio Void Breachers are coming with her, the wounded and ailing men’s only hope for recovery being the medical care offered at the Ring of the Last Candle. There’s a man called Jonas Tythe who dresses like a preacher, but in fact is an unwilling heresiarch, his faith in the God-Emperor shattered by the eldritch fate of his world and by his mysterious link to a book which fills itself with his own pessimistic philosophy. And there’s the otherworldly presence which has latched itself onto Asenath, which you could regard as her guilty conscience were it not for its very particular capabilities and interests…