Peter Straub’s A Dark Matter is clearly a work which is important to him; it’s so important, he’s published it twice. The commonly-available edition – which is what I am reviewing here, is a trimmed-down version of a significantly longer early draft, The Skylark, which was published in a limited edition at around the same time as A Dark Matter hit the market. On top of that, he’s also released A Special Place – The Heart of A Dark Matter, a portion of the material excised from The Skylark reshaped into a standalone novella. Clearly, Straub and his publishers think that A Dark Matter/The Skylark is a really big deal, and the judges of the Bram Stoker Award also thought so, giving A Dark Matter their 2010 award for best novel. 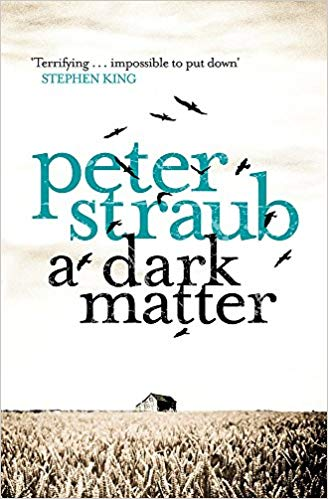 I’m not convinced. It’s not that I’m against literary fiction infused with sinister supernatural elements of the type that A Dark Matter aspires to being – hell, if I was, my reviews of The Ceremonies, My Work Is Not Yet Done, and all those Ramsey Campbell books would have been very, very different. And in fact, I think Straub has succeeded at producing literary horror in the past, and I’ve championed Ghost Story and Shadowland on here before. It’s just that A Dark Matter isn’t that good – not as a horror novel, not as an allegorical novel using occult symbolism to illuminate the characters’ inner lives, not as a literary slice-of-life novel, not as a modern-day fantasy, not as any of the different things it tries to be over the course of over four hundred pages. It has a hell of a beginning, and that kept me going for most of it, but it’s hard to deny that it just completely goes to pieces in the last third or so. The last hundred pages of the book more or less destroy anything Straub was trying to accomplish with it.

END_OF_DOCUMENT_TOKEN_TO_BE_REPLACED

I’ve got an analogy for you about the current state of the horror genre. Bear in mind that I’m only addressing the printed word here, rather than movies and television – that’s a different kettle of fish – and bear in mind that my analogies do tend to run away with me.

Here goes: the horror genre is a haunted house. It’s difficult to say how old the place is, but the foundations seem to be 19th Century. It’s a big rambling old boarding house, with many different tenants, sitting comfortably between Fantasy-SF Towers and Cryme Apartments. A bunch of new dwellers moved in during the late 1970s and early ’80s, bringing a glamourous air and lots of money; the house got a new lick of paint then, and the windows got double-glazing.

But oh, how times have changed. The Horror House is one of the least appealing on the street – while Fantasy-SF Towers just gets higher and higher, and Cryme Apartments still lures people in, the Horror House has fallen into decline. The paintwork is peeling, the gutters are full of leaves, the rats have moved in and there’s moss growing on the windows. Even those lunatic ol’ timers in the Western shack have managed to get a new lick of paint on their dwelling, and the Romance Boutique is doing a roaring trade.